3 years ago at 7:42 am ET
Follow @SteveB7SFG
Posted Under: 2019 Patriots Regular season 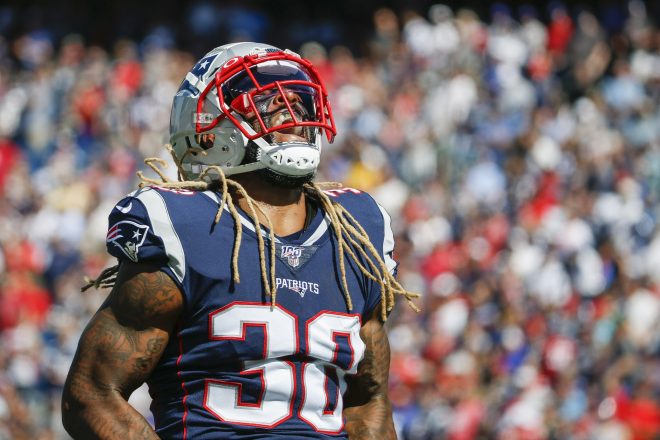 The Patriots are, despite the hand-wringing going on 4-0 and have already beaten every team in the division. And yes, with the way the defense played, they did deserve to win. The offense, on the other hand, struggled mightily. And the Bills had the same issue, while their defense was lights out, their offense threw four interceptions and had another turnover on downs inside the five-yard line. So it was a tale of two cities…if you will.

Special teams once again played a big role, both positively and negatively in this game but in the end, it was a knock-down grind out contest that the Patriots won, on the road in a very hostile environment.

Tom Brady had a pretty awful day by his standards, completing 18-39 for just 150 yards, no touchdowns, and an interception. The pick in the end zone [his first of the season] was particularly bad as it took points off the field and was a bad mental mistake, something that Brady rarely makes. His best throw was early on a 26-yard drop in the bucket to James White that set up the Patriots first touchdown.

But he wasn’t getting a ton of support from his wide receivers nor his offensive line in this game. There was plenty of negativity to go around…and will.

The Patriots got back James White this week, and as we pointed out in our keys, he figured to be a big part of the passing game [like the Buffalo game a year ago] and he was. White caught eight passes for 57 yards and was his normal, clutch self out there, setting up the Patriots first TD on a 26-yard wheel route where he beat Matt Milano.

Sony Michel had 63 yards on 17 carries [3.7-yard average] and showed some signs of getting the running game going. He does, however, seem to take an extra half-second or so, with hitting the hole. And in his defense, maybe it is because there isn’t any there.

Brandon Bolden again got some early work and scored on a nicely designed 4-yard run. Rex Burkhead was limited with a foot injury and got no carries, and had one reception for 7 yards. [More to this below] Jakob Johnson had some nice moments in the blocking game, including a nice clean out of Milano that sprung Michel on a 10-yard run.

The Buffalo secondary totally dominated this matchup on Sunday as the wide receivers got very little in the way of separation on Sunday. Josh Gordon had 3 catches for 46 yards including a big 31-yard drag route that the Bills challenged. Julian Edelman was banged up and not targeted nearly as much as normal and had only four catches for 30 yards. He also had a drop where he was in the clear and had a lot of running room. Phillip Dorsett, “the man that catches everything thrown his way” was taken away by the Bills. He was targeted 9 times and had 2 catches for 10 yards. Jakobi Meyers wasn’t targeted but once all game.

Last week the top three Edelman, Gordon, and Dorsett had 19 catches for 198 yards. This week they were targeted 23 times and had 9 catches for 86. That ain’t getting it done folks.

Matt LaCosse and Ryan Izzo weren’t targeted once in the passing game. When the TEs’ biggest contribution is whether or not his rub route was a foul or not, the production isn’t getting there. And the blocking has not been great either, not bad per se, but not great. It makes one appreciate Gronk so much more when he blocked like another tackle out there.

The offensive line still is having struggles opening holes in the running game, and they’re not getting a push on the opponent. Too many times the Bills stood them up at the line of scrimmage. The stretch runs don’t seem to be nearly as effective as the middle runs are. They were able to spring Michel on a few of them.

The pass blocking didn’t allow a sack, but a lot of that has to do with Brady being able to get rid of the ball so fast, as in the second half, the Bills pressure put Brady on rollerskates far too many times.

Coach Scarnecchia is always preaching everyone pulling together, and I believe that he’s going to sort this out.

The defensive line led by Lawrence Guy was excellent. Guy constantly takes on double teams and stops the offensive line from getting any push. Danny Shelton, who is really playing well in his second stint in Foxboro, had another strong game inside.

The Patriots pass rush racked up another five sacks for 40 yards and eight QB hits this week against the Bills QBs. While Frank Gore rolled up 109 yards on 17 carries, [6.4yard average], two of those runs totaled 61 yards and were from players other than the DL not making the plays at or near the line of scrimmage.

The Patriots linebackers even without Dont’a Hightower had another excellent game on Sunday. Kyle Van Noy, [becoming one of Bill Belichick’s biggest steals] was outstanding on the field for the Patriots. Van Noy was everywhere, eight tackles, including two for a loss, two sacks and four QB hits, including the final play for the defense where he hit Matt Barkley as he was releasing the ball, and allowed Jamie Collins an easy interception.

Collins was again very good and has to be loving his second go ‘round with the Patriots.He had four tackles, one tackle for a loss, one sack, one QB hit, one pass defensed and one huge interception to seal the deal.

Ja’Whaun Bentley was solid in filling in for Hightower, but he had one major gaffe early in the game. Gore showed a run to the outside, Bentley reacted too quickly and tried to fill a gap that was set on the edge. Gore recognized it and cut back to a wide-open B gap and ran it for 20 yards.

The secondary had another big day intercepting three passes and limiting the Bills to just 10 points. J.C. Jackson had a pair of interceptions and provided very solid coverage. Zay Jones was held to 2 catches for 4 yards on 8 targets. John Brown and Stephon Gilmore battled hard all day with Brown coming away with 5 catches for 69 yards on 11 targets. Cole Beasley led Buffalo with seven catches for 75 yards with most of them later in the game after matching up with Jonathan Jones.

Jackson had two mistakes that he’ll hear about from Belichick. On Frank Gore’s 41-yard run, Jackson had a clear attempt to wrap him up about two yards from the line of scrimmage. He turned and attempted a shoulder block that Gore shook off like a dog coming in from the rain and rolled for 41 yard…tsk, tsk. He also left his feet on a blitz against a mobile QB. Uh-oh, BB will take umbrage with that. But overall the second year UDFA had an excellent day.

Pat Chung had a solid game and had excellent coverage on Dawson Knox who just made a fantastic over the shoulder 26-yard catch on a third down. Couldn’t defend it any better than that.  Devin McCourty had his fourth interception in as many games.

Stephen Gostkowski had another miss on the first extra point of the day in an increasingly puzzling development. That miss may have loomed large if the Bills had scored in their final drive.

But the special teams’ units scored a touchdown on a blocked punt by J.C. Jackson that was returned for a score by Matthew Slater, his first touchdown in a stellar 12-year career. Jake Bailey was outstanding again punting nine times for a 48.1 average including two punts of more than 60 yards.

The Patriots coaching staff had the team prepared and they made nearly all of the correct calls on defense and special teams. Obviously, they saw something on tape that showed them the Bills were ripe for a punt block and they executed it flawlessly.

The offense and Joss McDaniels, however, struggled and the play calling was seemingly stagnant. They were relying on too many screens at or behind the line of scrimmage that the Bills were not fooled by all game. The Bills weakness on defense is the middle of the field targeting the linebackers but the Patriots attempted precious few attempts there. Perhaps Edelman being banged up and lack of confidence in the TEs has something to do with that. But Ben Watson should return just in time.

We’re on to the nation’s capital to take on the Redskins at 4-0, so there is a reason for optimism around these parts. The “Knockin’ on Seven’s Door” 2019 tour continues.