3 years ago at 7:21 am ET
Follow @SteveB7SFG
Posted Under: 2019 Patriots Regular season 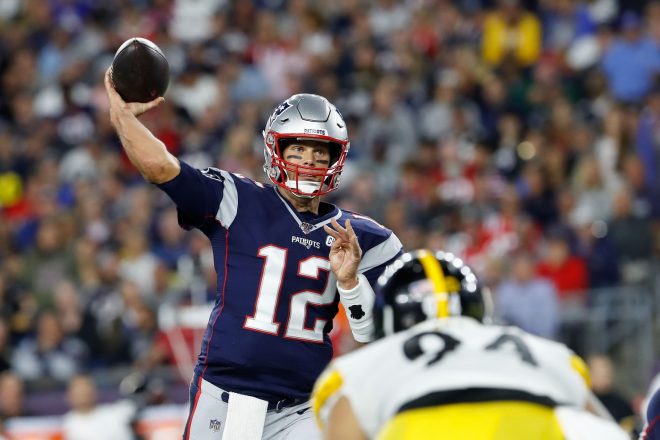 Saying the New England Patriots got off to a good start in 2019 is an understatement. The night began with the team unveiling its sixth Super Bowl banner and then absolutely dismantling the Pittsburgh Steelers by a 33-3 that was every bit as dominant as the score would indicate.

We entered the season just a few hours ago with questions about the offensive line, and how the offense would gel with a wide receiver core that didn’t get a lot of practice time with Tom Brady. Demaryius Thomas and Damien Harris sat this one out with injuries but the remaining cast members were outstanding as the Patriots rolled up 465 yards of offense.

Isaiah Wynn and Ted Karras both handled their duties excellently as these two were under the microscope going against a very good Pittsburgh front seven that led the league in sacks a year ago. Karras’ shotgun snaps [as many commented on during the game] were fluttering to Brady and while it didn’t set back the offense a bit but it is something that will have to be worked on.

With aggressive play-calling by Josh McDaniels, the Steelers were reeling almost from the outset and the receivers looked in mid-season form. Pittsburgh had no answer for the Patriots backs out of the backfield while Tom Brady absolutely picked them apart, something he’s done to Pittsburgh every time they’ve played in Foxboro.

Brady finished the night 24-36 for 341 yards with three touchdowns.

The Patriots defense, which we’ve been excited about all summer long looked as dominant as hoped for. Pittsburgh was unable to mount any kind of sustained offense. Stephon Gilmore rendered the dangerous JuJu Smith-Schuster to an afterthought and forced Ben Roethlisberger to be constantly having to look at his second and third options. Pittsburgh’s ground game was held to just 32 yards, while the Steelers passing game piled up a bunch of garbage time yardage, they were frustrated all night long.

Other observations from tonight’s win include:

Josh McDaniels Play-calling – McDaniels had an aggressive game plan and the players executed it to near perfection. The Patriots ate the Steelers alive with quick throws, utilizing shallow crosses underneath which allowed the receivers to make yards after the catch. Pittsburgh beefed up the middle of their defense this year, but at least for tonight, they didn’t look like they were ready for the Patriots passing game.

McDaniels dusted off the double pass from Julian Edelman to James White which had blockers out front and netted the team a huge 32-yard gain that set up the first touchdown. Whenever the Patriots spread the Steelers out, they were able to find open receivers all night long.

Brady Razor Sharp – Rust? Is Father Time catching up? Not any time yet. Brady was methodical in his approach and surgical with his precision, something he’s done to Pittsburgh time and again in the friendly confines of Gillette Stadium.

Brady’s best throw was a perfectly thrown ball right down the seam, a laser to Phillip Dorsett for a 25-yard touchdown. He put it in just the right place in a tight window for an easy score. Later in the second half, Brady uncorked a 52-yard strike to Dorsett for another easy touchdown when the deep safety blew the coverage and left the middle of the field wide open. With a national audience watching, Brady looked in vintage form.

Phillip Dorsett – Speaking of Dorsett, he’s often the forgotten man among the Patriots offensive playmakers. But tonight, he made the Steelers remember his name. He had four catches for 95 yards including two TDs [25, 52], and was a thorn in the secondary’s backside considering how many other players they had to cover.

The last 20 passes that Brady has attempted to Dorsett, dating back to last season have all been completions. Think about that for a second.

Josh Gordon – The troubled but uber-talented wide receiver was reinstated by the league just a few weeks ago but he too appears in mid-season form. Gordon has had good success against Pittsburgh in the past and tonight was no exception.

Gordon had three catches for 73 yards and included in that was a very impressive 20-yard touchdown where Gordon ran a crosser, broke tackles and powered his way into the end zone. Later, with the Patriots backed up in their own end, he and Brady connected with a 44-yard bomb right down the middle of the field.

James White/Rex Burkhead – On a night where the Steelers front seven bottled up and rendered Sony Michel ineffective, White and Burkhead constantly gashed the Steelers in both the running and passing games.

White had five catches for 56 yards and added 26 more on the ground in just four carries. Burkhead had 44 yards on eight carries and added five catches out of the backfield for 41 more. The versatility and the ability to spread the wealth around bodes very well for games down the road.

The Secondary is Outstanding – We’ve been beating the drum for this secondary all summer and tonight was a prime example of how good this group can be. They picked right back up where they left off from the Super Bowl. After holding the Rams to just three points, that was all the Steelers’ offense could muster tonight.

Stephon Gilmore neutralized Smith-Schuster all night long and on every big down, blanketed him like a glove forcing Ben Roethlisberger to look elsewhere. Smith-Schuster had a few catches in garbage time that made his numbers look better than the night he had overall.

Jonathan Jones, fresh off signing a long-term extension was brilliant in the slot, taking away the Steelers’ second options. He’s tough, physical and has excellent speed. Pat Chung was also outstanding, putting Vance McDonald, [someone we pegged as a possible safety blanket for Roethlisberger in our pregame] on a milk carton until the final drive of the game when he caught two meaningless passes.

Julian Edelman – Hurt thumb? No worries here. Lost in all of the hoopla with the rest of the offensive weapons was the fact that Edelman was his normal uncoverable self tonight, doing all of the dirty work across the middle of the field.

On the national broadcast, Chris Collinsworth called Edelman “fearless” as he knows he’s going to get tattooed with many of his catches. But it never stops him from completing his routes. With the offense spreading the wealth, Edelman had six catches [team high] for 83 yards.

The running game wasn’t as sharp as they had hoped, Michel had only 14 yards on 15 carries. They didn’t finish drives and had to settle for FGs. The pass rush didn’t generate much pressure on Roethlisberger [one sack]. So, the coaching staff will have plenty to pick apart in the film sessions to hammer home the point that they still have a long way to go. But it was a heckuva start.

Consider this, the offense looked as good as it did and they still didn’t have Demaryius Thomas, Damien Harris, and Antonio Brown, who signed with the team on Saturday…just in case you were on Mars over the weekend and hadn’t heard.

Arguably their best playmaker on defense, Kyle Van Noy missed the game due to the birth of his child tonight [we hope everyone is fine], So, this wasn’t even a fully-loaded roster.

The march to be “Knockin’ on Seven’s Door” began in earnest tonight and put the rest of the league on notice… the Patriots are back and don’t look like they’re going anywhere any time soon.