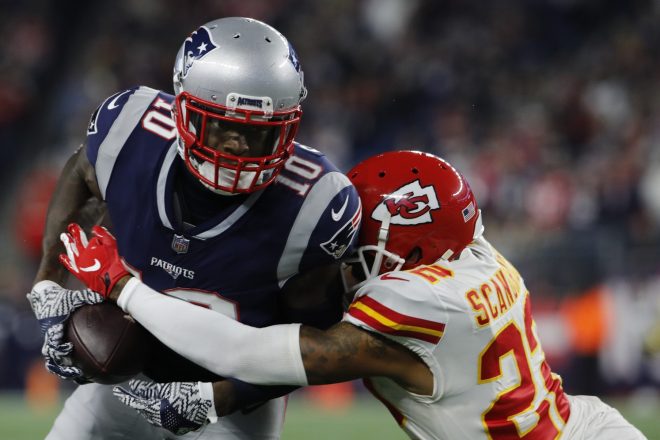 Social media was abuzz yesterday after and many Patriots fans were as happy as Christmas morning when the images of Josh Gordon stretching at practice and Demaryius Thomas in full uniform, off of PUP. With Julian Edelman and N’Keal Harry also back at practice, the wide receiver position and situation was now much rosier and many folks were already checking flight availability to Miami in early February. Let’s just pump the brakes on that just yet.

We’re always glass-half-full types here and if there is anything that the past two decades have taught us is they always, always get things figured out. Which is why we weren’t in full-blown panic mode a week ago when the same social media mavens were decrying Bill Belichick for leaving the cupboard bare when Tom Brady was throwing to Gunner Olszewski early in the joint practice with the Titans.

Now with the risk of sounding like Debbie Downer here, we’ll try to explain our “cautious optimism” when it comes to the receiver group. Having Edelman, Gordon, Harry, Thomas, Phillip Dorsett, Jakobi Meyers, Maurice Harris, and Braxton Berrios at the position is certainly cause for optimism, and if it were 2012, I’d be calling friends in Florida and preparing them for houseguests in February. But it isn’t and I’m not ready to do that… just yet.

Gordon The Most Physically Gifted But Flawed WR:

Gordon’s talent is still undeniable, he showed that last year where he came in and produced at a very good level. And there is no reason to doubt that at age 28 that physically he couldn’t produce the same or even more if he plays 16 games. But he hasn’t played a full season since his rookie year of 2012.

His issues have always been off the field and even with a great deal of support from the Patriots last season, his demons resurfaced and he once again found himself suspended by the league. While we certainly don’t want to see him backslide, more from a personal than a football standpoint, counting on him for an entire season is something the team can’t afford to do.

The Patriots made it clear that although they’d welcome him back [and gave him a tender], they weren’t planning on having him around. Hence the signings of Harris, Dontrelle Inman [now with the Bolts], Thomas and drafting Harry while adding Meyers after the fact.

Can Thomas Reinvent Himself?

With Thomas, the opposite questions are in-effect. His on-field regression with the Texans last year was evident after he was traded by the Broncos. He didn’t look like the same receiver before he tore his Achilles. But he’s been rehabbing hard with the training staff and seems as upbeat as one can be.

So what can be reasonably expected from Thomas at this juncture of his career? We didn’t think he’d even make the team, which is why the timing of his coming off of PUP was so intriguing. With just two days of practice before the Carolina preseason game, and then just a week of practice and a final tuneup with the Giants, it leaves him precious little time to get on the same page with Brady and the offense.

Perhaps Thomas is going to reinvent himself as a more of a possession type of wide receiver and become a chain mover rather than the game-breaker he was earlier in his career. That is a possibility, but until we watch him on the field and see him run, I’d err on the side of caution, and not count on him making the 53-man roster.

Harry and Meyers Have Upside But Are Still Rookies:

Patriots fans are justifiably pleased and should be with the selection and performance of both Harry and Meyers. And Meyers, the UDFA QB turned WR from NC State has probably been more impressive this summer. He’s shown a quickness off the line where he’s been able to gain separation and catch everything that’s been thrown his way.

Former Patriot and now analyst Matt Chatham said he looks like a six-year veteran on the field. He’s developed quite a rapport and chemistry with Brady and the QB has been throwing to his spots on the field before Meyers makes his breaks.

Harry has all of the tools and the size to be a very productive WR in the league for years to come. He’s the only WR that Belichick has ever taken in the first round of the NFL Draft. He’s the master of the contested catch. However, his development has been slowed by a few nagging injuries this summer.

But something to keep in mind with both of these players is that they are rookies. Their production may take some time to get going. The speed and physicality of the NFL game is something they’ll have to get used to. They won’t be facing the twos and threes of an opponent’s defense but their top-line players. Patience is the word of the day.

So, while we believe that the offense is going to be just fine [never had any doubts], let’s just slow the talk of the “best WR group since 2007” for a bit …As Belichick is so fond of saying… “they have a long way to go.”