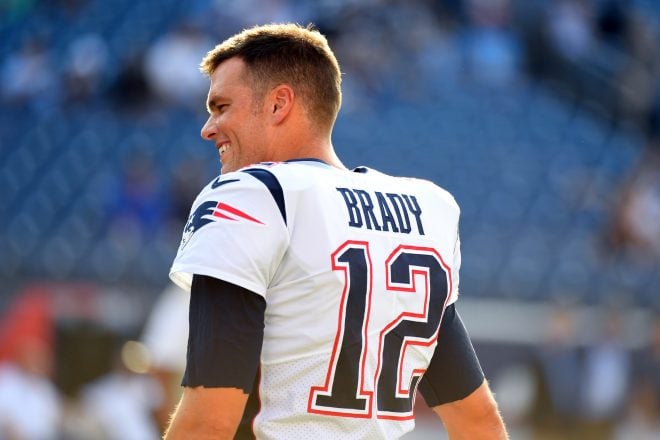 On Tuesday Tom Brady continued to dominate Twitter by poking fun at himself before everyone else could.

Originally Brady shared a photograph of himself catching a football and shared some funny fantasy football advice by saying “I know your drafts are coming up so I need to let all of you know I’m a PPR threat now.”

Which in most cases is fine except for one thing…The tweet opened the door for Philadelphia Eagles fans to make jokes about his dropped pass in Super Bowl 52.

Unfortunately for them even online you can’t underestimate The Goat.

Brady followed up his tweet with a humorous disclaimer that read “We’re in the trust tree here, no Super Bowl 52 jokes please.”

That’s how you get in front of the endless stream of drop gifs, which flooded his mentions.

For Tom Brady, a guy who once said he’d never get a Twitter, continues to show off his funny self-awareness and social media savy talents.

One fan ignored the request and Brady shocked him with a reply he’ll never forget.

This won’t be the last time Brady encounters Philadelphians, The Patriots will head to ‘The Linc” for a Super Bowl rematch November 17th.