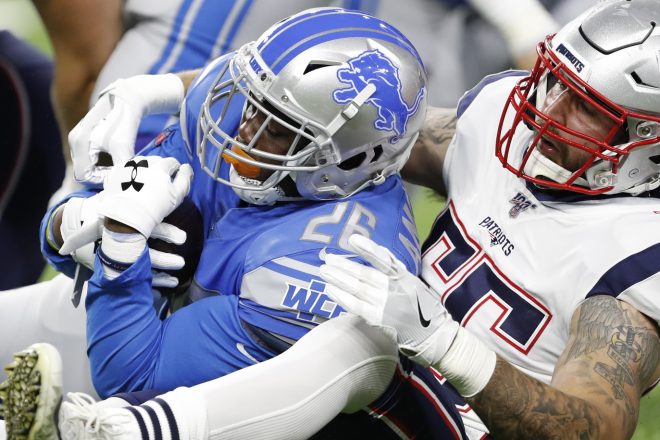 What a difference a year makes. Last season at this time, there were major questions about the depth of their linebacking corps and who…besides Trey Flowers could rush the passer. Now, they enter their second preseason game and the front seven has depth galore and an entirely new outlook on things.

Flowers was tough to see leave, he did so much and a lot of it under the radar for the Patriots. But the team addressed it in several ways this year. The big men in the middle Lawrence Guy, Mike Pennel, Adam Butler, and Danny Shelton look better than they were a year ago inside. Rookie Byron Cowart is still a long shot for the roster but has come on after missing time early with an injury. He had a half-sack and a QB pressure last week in Detroit.

Although Michael Bennett is 33 years old, as of today, he shows no sign of slowing down and has been dominant in our limited look at him so far. And Bennett is flashing some of the same versatility, lining up inside, outside and even over the nose.

He’s embracing his role and the defensive scheme and seems to have a healthy respect for the coaching staff. Deatrich Wise hasn’t been 100 percent yet but should now see some action. Consistency is the key for him in 2019.

Chase Winovich was picked up this spring in the third round of the draft and he’s been “exactly who we thought he was.” He has an incredible motor that goes non-stop, excellent hands [which will only get better with pass-rush consultant Joe Kim]. Winovich has looked terrific in his opportunities which included a 1.5 sack performance against the Lions last week.

Derek Rivers keeps trending up. He too had a big game against Detroit [2 sacks], and put constant pressure on the QBs last week, both in practice and in the game. After being a total non-factor for his first two years, is he a shoo-in? No, but the way he’s playing has to be a huge confidence boost for not only him but the coaches.

Shalique Calhoun is quickly becoming a steal. The veteran that came over from the Raiders this spring barely registered on the radar [here as well….], however, it seems like he’s another guy that wasn’t considered a nice pickup and who can pay big dividends for the team. His play was such that he was given reps with the starters. He responded in Detroit with a sack and a tackle for loss.

And we haven’t even got to the linebackers. John Simon was the under the radar pickup last year.  He does a terrific job of setting the edge and had an interception last week. Jamie Collins was dynamic last week and has been a beast throughout training camp. He has the athleticism to be a movable chess piece anywhere they sense a mismatch to their advantage. He had a sack last week…. Are we sensing a pattern here?

Dont’a Hightower and Kyle Van Noy are the linchpins for the front seven. They can rush off the edge or up in the A-gaps.  Hightower dropped weight this offseason and looks faster and a bit more athletic. He looked good back in his home state this week.

Van Noy was another Belichick highway robbery when they snatched him away from the Lions. He can do everything that Belichick and Mayo will ask of him. Elandon Roberts and Ja’Whaun Bentley hold down the middle. Two guys outside looking in are Calvin Munson and Christian Sam.  Munson has put back-to-back solid weeks together.

Last week, the Patriots had 17 QB pressures and nine sacks against the woefully unprepared Lions. This week against a better team, the front seven hounded Titans’ QBs in the joint practices. Can they do it again in the game on Saturday night?

We shall see. But things are trending up for this defense in 2019. In about three weeks will be the first real test when they take on the Steelers in the season opener. Pittsburgh has one of the better offensive lines in the league. And this time around, there is growing confidence in the front seven.