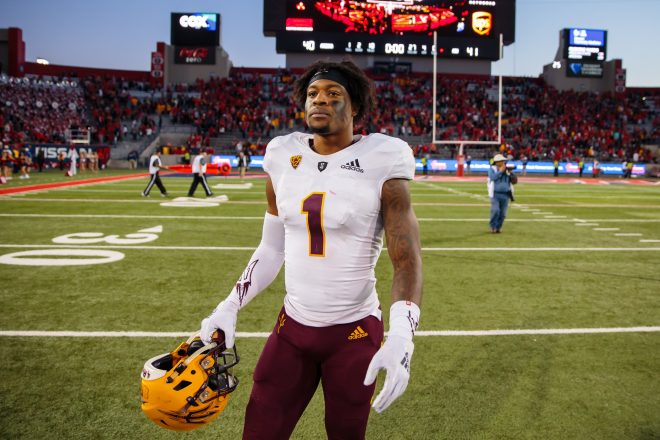 The Patriots stayed put in the first round of the 2019 NFL Draft and with the 32nd selection took N’Keal Harry, WR from Arizona State.

In selecting Harry, this is the first time the Patriots drafted a wide receiver in the first round since the days of Terry Glenn, back during the Bill Parcells era. He has long arms and uses his catch radius and body positioning to always seem to get open. He’s a threat for big yards after the catch (YAC) and while not a burner in the 4.3 range, he has good speed. He will immediately become a matchup issue for opposing defenses because of his size, physicality, and athleticism.

In our final pre-draft podcast on Patriots 4th & 2, Derek Havens and I had Harry mocked to the Patriots with the #32 pick.

The pick should have brought a big smile to the face of Patriots QB Tom Brady, he gets a big (6’2, 228) physical wide receiver who was extremely productive in college. In 37 career college games, Harry caught 213 passes for 2889 years and 22 touchdowns.P

Patriots Director of Player Personnel Nick Caserio told the Patriots media after Round 1, the team was getting phone calls about moving back but decided that selecting Harry was the better option. Caserio said that Harry is, “a big, strong receiver with good hands … good with the ball after the catch.” Harry after being selected, spoke to the Patriots media and to the NFL Network and stated he thought his home state team the Arizona Cardinals would take him at #33 which may have convinced New England to stick with the pick and take him.

Within the Patriots system, Harry seems to be a tremendous fit. He can attack zones in the short to intermediate area and presents a big target with the ability to high point and win contested passes and those in traffic. Those quick slants that Brady likes to throw and did with Josh Gordon will quickly become a specialty with Harry. He has strong hands and is a tough run blocker.

He’s arguably one of the top three WRs in the draft and the Patriots just got him. Adding him to the mix with Julian Edelman, Phillip Dorsett, Demaryius Thomas and possibly Josh Gordon in the future just made the cupboard a lot less bare in the meantime. After Edelman, he’s already the best receiver among the WRs and TEs on the roster.

Former Patriots front office man Michael Lombardi called Harry “a beast with the ball n his hands.” Harry’s comments make him seem like a perfect Patriot. “I play with a lot of passion. Whenever that ball’s in the air, I’ll sacrifice anything to go get it,” he said to the media after being drafted. “I’ll do whatever it takes to help the team win. Anything coach wants me to do — whether it’s on special teams, offense, anything — I’ll do it.”

And it should be noted, Harry ran back a punt 92 yards last fall against USC.

By: Ian Logue
Seeing Vince Wilfork emerge as this year's New England Patriots Hall of Fame inductee is a fitting end to quite a story for the former…
8 hours ago