4 years ago at 6:38 am ET
Follow @SteveB7SFG
Posted Under: NFL News 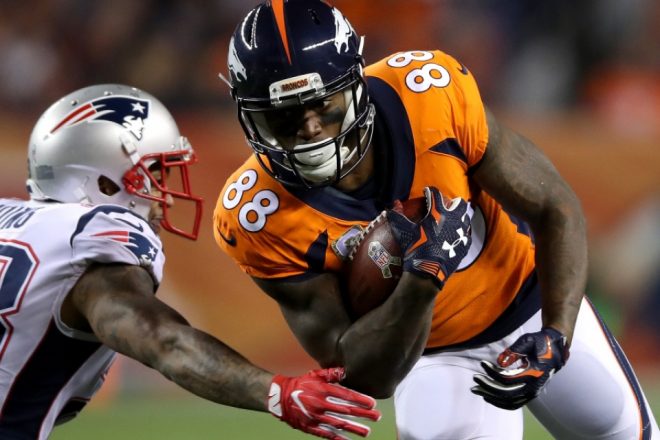 The Patriots attempt to virtually sign every free agent wide receiver on the market this spring has finally borne fruit. The team has signed free agent Demaryius Thomas to a one-year deal worth up to $6 million dollars according to ESPN NFL Insider Field Yates.

The Patriots tried to bring Thomas in at the trade deadline last season but he was traded to the Houston Texans instead. It certainly appeared last season that Thomas, who has averaged about 15 yards per reception had lost a step. Of course, the subpar play of the Denver QBs may have played into that.

He played in seven games with the Texans before tearing an Achilles tendon ending his season. Therein lies the risk. Thomas will turn 32 late in the 2019 season and is coming off of a serious injury. His game is built on being able to gain separation and is not a physical receiver, despite his excellent size at 6’3, 229.

Back in 2010, Josh McDaniels, then-head coach of the Broncos had a lot to do with Denver taking him in the first round of the draft. So, he has had at least some experience with Thomas, albeit nearly a decade ago.

So what are the Patriots getting with this signing?

With any wide receiver signing, the first thing we always wonder is “will he be able to learn the Patriots playbook?” That is a legitimate question as we’ve seen several established wide receivers flame out here in New England as they had issues learning the route tree of the Patriots offense.

That shouldn’t be a big issue with Thomas. He played in the Houston Texans system, which was put in place by Bill O’Brien after he spent several years here in New England and is considered very similar. So, in that aspect, he should already be ahead of the game with his couple of months with Houston.

Is he going to be ready to go in training camp? Achilles injuries aren’t the easiest to recover from and at 31, it is not going to be a given that he’s going to be ready. However, the Patriots had him in for a visit last week and had to be encouraged enough to offer him a deal.

Thomas suffered an Achilles injury earlier in his career and was able to recover from that one in just six months, so that is in his favor.

Thomas’ game was always built around the elite athleticism that allowed him to gain tremendous yards after the catch. With an aging athlete, an Achilles injury could seriously impact that.

The Patriots are very thin at wide receiver with Julian Edelman, Phillip Dorsett, Bruce Ellington, Maurice Harris, Braxton Berrios, Damoun Patterson, and STs ace Matthew Slater to round out the depth chart. Josh Gordon is suspended indefinitely and shouldn’t be counted upon for any production this season.

To say that there will be plenty of opportunities for a WR to carve out a role opposite Edelman is a more than just a bit of understating things. Thomas, if he’s healthy could certainly be a key player in the offense in 2019. The wide receivers, however, will find the going much tougher this year with no Rob Gronkowski drawing so much attention from opposing defenses as he’s had in the past.

Thomas had five straight 1000 yard seasons between 2012-2016 but has had his numbers dropping off for the past several years. While some of that can definitely be attributed to QB play, (Brock Osweiler, Paxton Lynch, Trevor Siemian) he definitely appeared to be losing a step on tape and that YAC wasn’t as big as before.

Coming off of a serious injury, that athleticism could be even more affected. As to his contract, the devil will lie in the details. Much of that cash may be tied up in performance-related bonuses. So, we will have to wait and see how that looks once the contract details are posted. As for on-field expectations, if fans are expecting the monster years of 2012-2014, they are going to be very disappointed. His career numbers have steadily dropped in the last 5 years, as has his yards after the catch.

Put expectations with Thomas as minimal and hope that he can provide a solid role player’s production at this point of his career. This signing shouldn’t impact at all the need for the team to select one of the better wide receivers in the upcoming draft.

The Patriots have been linked to several WRs including A.J. Brown(Ole Miss), Deebo Samuel (South Carolina) who said in an interview “C-ya next month Bill”, Hakeem Butler (Iowa State), and others, including UMass’ Andy Isabella.

In other news, the Patriots announced the re-signing of CB Jonathan Jones who signed his one-year tender.