4 years ago at 7:00 am ET
Follow @SteveB7SFG
Posted Under: Patriots Report Card 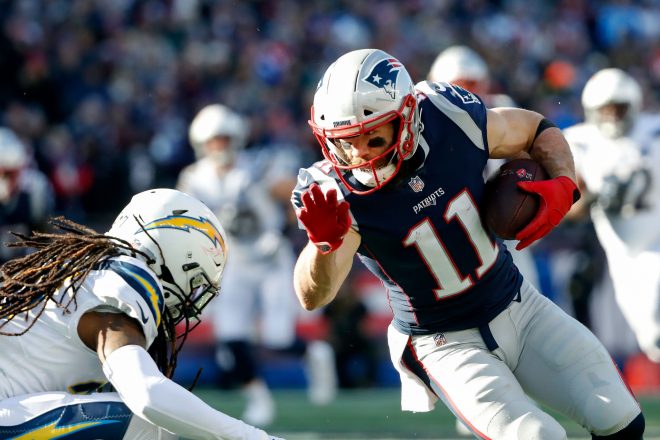 Patriots Report Card In Blowout Win Over the Chargers

We said they needed to start fast and boy did the Patriots ever do that. When was the last time you saw domination like that in the playoffs? Answer… Never. No Patriots team has ever begun a playoff game with four touchdowns on their first four possessions.

This one was truly over at halftime but we’ll grade the team for the entire 60 minutes and it was something to see. This is the team that we’ve grown accustomed to seeing and unfortunately haven’t seen this year… until now.

This week Tom Brady heard the noise, many national types were saying this week against the Chargers was the end of the Patriots dynasty, the end of Brady-Belichick. The Bolts were going to put he and Rob Gronkowski into retirement mode.

Brady was fired up but more than that, he was on top of his game all day long. He saw that the Chargers were sticking with their soft zone Cover 3 look, a defense he’s shredded for his entire career and once again he gralloched it with ease.

He completed 34-44 for 343 yards and a touchdown and looked as sharp as he’s been all year. His best pass was in the fourth quarter. Derwin James had tight coverage on Julian Edelman and Brady lasered a BB down the field that Edelman turned into a 35-yard gain. His arm strength going? Watch that throw again. And again.

Don’t try to fight a lion if you’re not one yourself.

As we mentioned above, Brady and the Patriots have played this Gus Bradley Cover 3 zone defense in the past. Shane Vereen had a big day catching the ball in the Seattle Super Bowl, 11 catches 64 yards on 12 targets. The Atlanta Super Bowl, James White roasted them, 14-110 and a TD on 16 targets. Last year more of the same 14-15 for 163 yards. White was targeted 17 times on Sunday, he caught 15 passes for 97 yards.

Sony Michel gashed the Chargers run defense for 129 yards and 3 TDs on 24 carries. He had his longest run of the season a 40-yard scamper to boot. Rex Burkhead chipped in with a 6-yard touchdown run of his own. The running backs ran for 155 yards on the ground and were targeted 19 times in the game with 17 receptions for 113 yards.

When the Patriots ran out of their “21” personnel, they averaged nearly 7.0 yards per carry on Sunday. The Chargers linebackers were banged up and they were going with a light package and had no answer.

Julian Edelman was arguably the player of the game for the Patriots. Something to keep in mind, Edelman hasn’t played in a playoff game since the Super Bowl against Atlanta. And yes there were even whispers that he’s lost a step.

He cranked his game up a notch…actually two, and was fantastic. He had nine catches for 151 yards and he set the tone early in the game. On a third and short. Edelman caught the pass from Brady and appeared that he’d be tackled short of the sticks. But he broke the tackle and kept driving and picked up the first down. Soon after, the Patriots were in the end zone.

During the game, Edelman moved into the #2 spot all-time for playoff receptions behind only Jerry Rice. He also moved into the top 10 all-time in receiving yardage in the postseason. And people still try to belittle his accomplishments by calling him a “slot receiver”… Oy vey. Not bad for an undersized option quarterback.

Rob Gronkowski dominated in the running game. With the Patriots trying to run the ball, Gronk showed why he’s a complete tight end and he was blowing people off the ball. He helped Cannon put Melvin Ingram on roller skates on Michel’s 40-yard run and for good measure drove Hayes Pullard to the sideline.

He caught one pass for 25-yards that was classic Gronkowski. He took the pass in, broke the initial tackle attempt and then ran over the next man. He drew a pass interference penalty in the end zone and helped clear out a ton of real estate for Phillip Dorsett, who was wide open for a touchdown.

The offensive line had arguably their best game of the season and maybe of the past two seasons. The Chargers defense was no “tomato can”, they are a top 10 unit against the run and the pass. And the Patriots offensive line absolutely dominated the point of attack all day long.

Trent Brown and Marcus Cannon absolutely dominated the matchup against Ingram and Joey Bosa, they made life hell for Lamar Jackson a week ago. On Sunday, Brady had a clean pocket all game long and was only hit a couple of times.

In the running game, not only did they fire off the ball and get a great push, but the blocking downfield was outstanding. When your offense rolls up 500 yards against a Top 10 defense, it usually means one thing for the offensive line. Total domination.

The Patriots defensive line had another outstanding effort in Sunday’s game. They held Melvin Gordon and the Chargers backs to just 19 yards on 10 carries. And once they stuffed the run, they had Philip Rivers forced into passing situations.

In the pivotal first half, Rivers was pressured on 70 percent of his throws. Trey Flowers and Adrian Clayborn (who had his best game as a Patriot) each had a sack. Flowers had another taken away on a ticky-tack penalty where he was blocked into the ground and thus hit Rivers low.

Adam Butler had some good quality snaps and provided good pressure on Rivers as he saw quite a bit of work with the running game shut down.

The Linebacking corps was also outstanding on Sunday. They were terrific in run support, the hardest hit of the day was Elandon Roberts down by the goal line where he had a tremendous collision with Gordon that sent the running back flying backward.

Kyle Van Noy was once again all over the field and he and Dont’a Hightower were constantly moving around in the “amoeba defense” which kept the Chargers guessing to where they were coming. Hightower was used in a pass rush mode often and created great pressure all game long.

John Simon saw quite a few snaps and was impressive, getting pressure on Rivers and stuffing Gordon for a loss.

Stephon Gilmore got fooled badly on the Bolts first possession where Rivers looked him into the middle of the field and Keenan Allen blew right by him for a 43-yard touchdown. But after that, he blanketed Allen and shut him down. Allen would catch only two passes, the other with Jason McCourty covering. Gilmore picked off Rivers with a very nice play in the second half where he got body position and went up and high pointed the ball.

Rookie J.C, Jackson had a very competitive game against the impressive Mike Williams who made some terrific catches with tight coverage. Jason McCourty had a bit of a rough day and gave up several long completions to the Williamses and a 30-yarder to Allen who caught it and went down at the one-yard line.

Pat Chung and Devin McCourty were very solid all game long. Rivers padded his stats with a lot of garbage time yardage and a pair of scores, but the defense was playing much different by then.

The only blip on the special team’s radar was the opening play of the game. James Develin flubbed the kickoff out of bounds shy of the 17-yard line, where if he let it go, it goes out of bounds and the Pats get it at the 40-yard line.

The coverage units did a pretty good job on holding Desmond King in check and Stephen Gostkowski was a perfect 7-7 on his kicks.

Albert McClellan recovered a fumble that quickly turned the game into a blowout. He’s been outstanding since coming here in mid-season. Isn’t there a dweeb on sports radio that constantly pooh-poohs Belichick signing STs guys? That’s why you sign them.

Josh McDaniels called a heck of a game. The Chargers defense was kept guessing all day long and he knew exactly how to attack it and exploit the matchups. Bill Belichick had the players ready to go and they fired out of the gate better than they’ve played all season.

And please…stop with the “what happened in the second half?” nonsense. This game was over and Bill Belichick and McDaniels weren’t going to give Andy Reid and the Chiefs any other film to watch. They put it on cruise control and put the six-guns in the holsters and milked the clock.

Belichick and Brian Flores weren’t shy about challenging the talented Chargers and bringing the heat on Rivers. It was a tremendous game plan and flawlessly executed.

By: Steve Balestrieri
“A lot of guys were getting worried because when we were in the middle of camp, we were wondering what the plan was for our…
15 hours ago