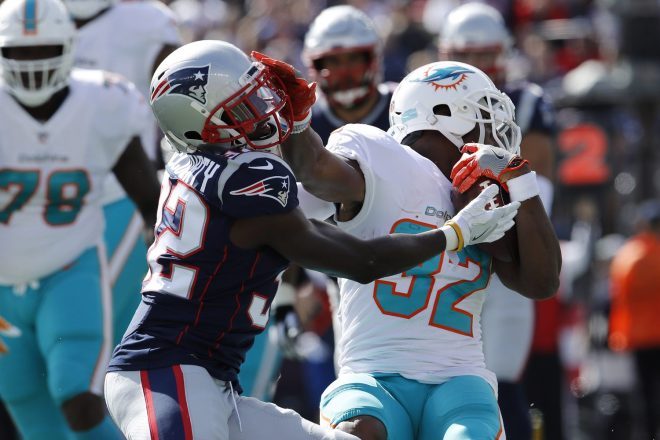 On Thursday, the New England Patriots formally announced safety Devin McCourty as the teams nominee for the 2018 Walter Payton Man of the Year Award.

The award recognizes an NFL player for outstanding community service activities off the field, as well as excellence on the field, all 32 NFL teams selected a nominee Thursday.

McCourty earned the nomination for his yearly holiday initiatives, juvenile criminal justice reform efforts, and his partnership with the Embrace Kids Foundation to create the “Tackle Sickle Cell” campaign which has provided support and awareness for families whose loved ones suffer from sickle-cell disease and helping raise money to research for a cure.

McCourty credits the upbringing from his mother as to why he gives back as much as he does.

“I give back because my mom instilled it in me. She showed me the way by having a good heart and giving back to people,” said McCourty in a press release. “She was a nurse and growing up I knew in life that I wanted to do something to give back to people. It’s so much more gratifying when you can give to others and see the effect you have on them. Anyone can take a gift, but to take the time out and do something special for someone, it’s a great honor.”

“We are very excited to nominate Devin McCourty for the NFL’s Walter Payton Man of the Year Award,” said Kraft . “He has been a special part of our organization for nine seasons, not only for what he’s been able to do on the field, but for the way he’s been able to positively impact those in our communities. Devin is a natural leader and his genuine commitment to helping others is inspiring.”

As a nominee, McCourty will wear a special Walter Payton NFL Man of the Year helmet decal through the end of the 2018 season in recognition of his accomplishments on and off the field.

The 2018 winner will be announced on February 2nd 2019, the day before Super Bowl LIII at the “NFL Awards” show in Atlanta, GA.

Devin's dedication to making a difference dates back to his childhood.

Today, he uses his platform as a Patriot to leave an impact in New England & beyond.@McCourtyTwins | #WPMOYChallengeMcCourty pic.twitter.com/a2CPe07SiW

During his Thursday press conference, McCourty was presented with a plaque by Robert Kraft commemorating his nomination.

Robert Kraft presenting Devin McCourty with some hardware as the team’s Walter Payton Man of the Year nominee for 2018. pic.twitter.com/DKWFIeWYn8

For more information about the Walter Payton NFL Man of the Year Award, checkout nfl.com/manoftheyear.