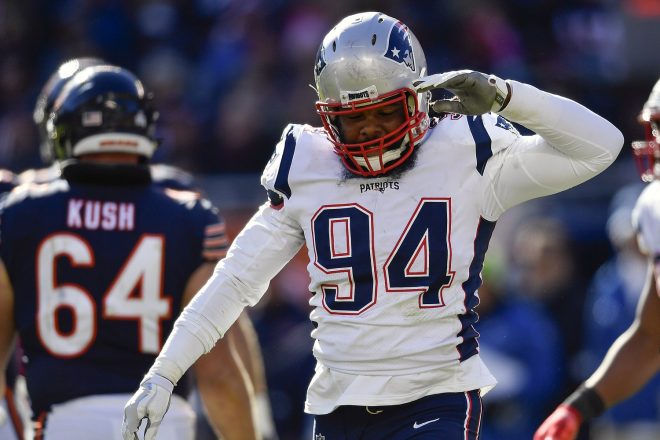 The New England Patriots entered their Sunday afternoon tilt with the Chicago Bears seeking their first road win of the 2018 season. Under Head Coach Bill Belichick, the Patriots had never started a season 0-3 in road games.

Always up to the challenge. #Gameday

In the first quarter, the Patriots got the ball first, as Brady and the offense moved swiftly down the field for the games first touchdown.

Why settle for just the first down when you can get the TD too? @Edelman11 | #NEvsCHI | #GoPats pic.twitter.com/4Iqr597zXM

The Bears responded with a Cody Parkey 46 yard field goal, but a special teams fumble by Cordarrelle Patterson setup the Bears go ahead touchdown. 10-7 Chicago after one.

The momentum continued to shift Chicago’s way into the second quarter, when running back Sony Michel also turned the ball over on a fumble in what appeared to be a serious knee injury in the moment.

Reports Tuesday later came out saying the injury was “not serious”.

The GOAT with the tackle after the Michel fumble. pic.twitter.com/Hx0MMwK1Ni

The fumble led to the Bears second touchdown of the game on a running back Jordan Howard two yard run to extend their lead to 10 at 17-7.

Needing to weather the Bears 17-0 scoring run, kick returner Cordarrelle Patterson redeemed his fumble in a big way, returning the ensuing kickoff 95 yards for a touchdown. The Patriots deficit was trimmed to 17-14 at the ten minute mark of the second quarter.

There were a bunch of clutch plays by the Patriots yesterday, and this one ranks high on the list. Not much Bears CB Kyle Fuller can do here. pic.twitter.com/vJzXjZuSBL

Every week I like Josh Gordon more and more.

What an option route by .@SweetFeet_White!!! No chance for Floyd. That type of route still gives me nightmares. #NEvsCHI

In the second half, quarterback Mitch Trubisky continued to show off his running ability as the Bears regained the lead again courtesy of Tarik Cohen. 24-21 Bears.

#Bears QB Mitch Trubisky has 81 yards rushing on 6 carries, the most rushing yards by a CHI quarterback since Cade McCown had 87 in season opening 30-27 loss to #Vikings on Sept. 3, 2000.

Following a 29 yard Stephen Gostkowski field goal to knot the game up at 24 all, the Patriots special teams unite came up big again courtesy of Dont’a Hightower and Kyle Van Noy.

A 31-24 Patriots lead after three quarters following the first blocked punt return for a touchdown in team history for over 20 years.

Blocked by @zeus30hightower.
Returned by @KVN_03.

Here's what I could get of that blocked punt TD pic.twitter.com/mEht6bOTWY

Patriots' first blocked punt for a TD since Tedy Bruschi in 1996. According to a source, upon hearing this, Bruschi just said, "Aaaaaaaawwww yeah!"

The last time the #Patriots returned a blocked punt for a TD? @TedyBruschi at Baltimore on Oct. 6, 1996. #NEvsCHI | #GoPats pic.twitter.com/qUaGQhg6f5

S/o my dawg @_boomtower for the assist! S/o my guy @gronk for letting me borrow his spike today!!! That was for you and patsnation baby!! #buddyscaredintheback #heshook #halloweenspike #gronkspike #Td #blessing #peanutbutterandjealous

With the Bears driving to open the fourth quarter, cornerback Jonathan Jones made an incredible leaping interception of Trubiski for the teams second pick of the day.

Jon Jones with a sick interception of Mitch Trubisky pic.twitter.com/ph7EPpwzjl

The pick gave the ball back to Brady, and he made the Bears pay following this deep 55 yard pass to Josh Gordon that setup James White for another touchdown. A 14 point 38-24 lead with 8:40 to go in the game.

The 55yd reception by Gordon ties Patterson (Week 4 vs Miami) for the longest pass play of the season.

The turnovers continued to hurt the Patriots however, as Tom Brady endured another hard luck interception by way of a dropped pass that gave the Bears life.

Kyle Fuller gives us the back ball!

SPOILER ALERT: Offense got it done and we scored. pic.twitter.com/vNylIOcl4r

The Bears cashed in as Trubiski found Trey Burton to make it a one possession game with 4:13 remaining.  38-31.

The Bears had one more chance to send the game to overtime, but it fell just (a yard) short.

The Patriots would escape Chicago with their fourth consecutive win to move to 5-2 on the season. They’ll head to Buffalo for Monday Night Football Next.

Insane ending to the #Patriots #Bears game. Bend but don't break, if we've ever seen it. pic.twitter.com/Bu0OcWpxE9

Jonathan Jones discusses his INT, and Patrick Chung informs us that Jones “sucks at cards.” pic.twitter.com/SaTiJfCH5C

W with my man @thatlguy! #GrindOn

Tom Brady extends his NFL record, leading the #Patriots to a win after trailing by 10+ points for the 32nd time in his career. #GoPats pic.twitter.com/6dKfwL0Cmj

Should we call it Gilmore island?