4 years ago at 11:30 am ET
Follow @IanLogue
Posted Under: Patriots Commentary 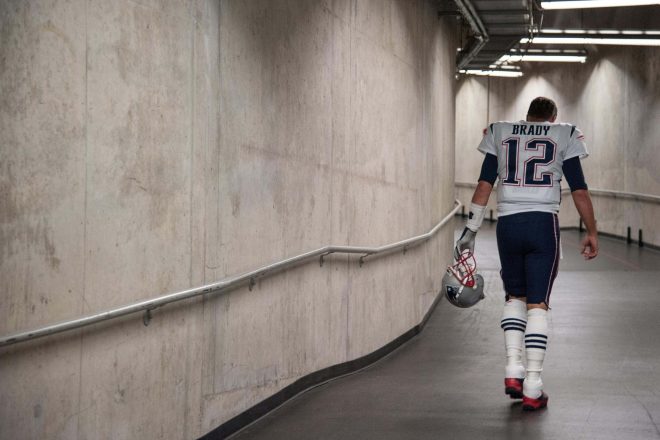 Three games into this season, there’s only one conclusion we’ve been able to come to given what we’ve seen so far from this Patriots team.

They’re a mess, with some serious problems that may or may not get solved.

The passing game obviously remains the most glaring, with New England’s offense finishing Sunday night’s game against the Lions with just 133 passing yards as Tom Brady struggled to find an open receiver and Matt Patricia’s defense made him completely miserable.

But Sunday’s contest was just the culmination of two weeks of frustration.  The Patriots came out of their win over Houston having managed to hide their weaknesses by utilizing their running backs in Week 1. From there, they’ve faced two good coaches armed with two top 10 defenses who stonewalled that approach and shut them down.

Sunday night, Brady and the Patriots had their worst performance thus far.  Detroit kept the ball away from them for nearly 40 minutes, with New England’s defense being forced to spend every one of those minutes trying to adjust to a Lions team that seemingly knew what was coming.

Matthew Stafford missed just five passes in the first half, completing 18-of-23 and putting up 150 yards passing.  But if that wasn’t bad enough, the Lions offensive line manhandled the Patriots’ defensive front and Detroit rushed for 81 first-half yards.

In the second half, the Lions pulled away, with their defense wearing down a Patriots offense that like the week before in Jacksonville, lacked the ability to get back in the game because the receivers couldn’t get any separation.  Detroit knocked the receivers around coming off the line and were relentless, and the Lions never let up.

As the passing game struggled, they at least had some success running the ball.  Sony Michel finished with 14 carries for 50 yards, but he struggled catching the ball out of the backfield.  Brady targeted him 3 times and he dropped two of them.  Some may wonder why they were trying to force the ball to him, but it’s not that hard to figure out.  Take Michel out and bring in James White and you know they’re likely going to pass.  Leaving Michel in at least kept them guessing, but it doesn’t work unless Michel can catch the football.

That more or less summed up their night.  Brady finished the final two quarters completing 7-of-15 (46.7%), with the highlight of the second half, and the game for that matter, coming on the Patriots first drive of the second half when he capitalized on a Stafford interception and drove the offense 52 yards on 7 plays and hit White for a 10-yard touchdown to pull the club to within 3 points at 13-10. 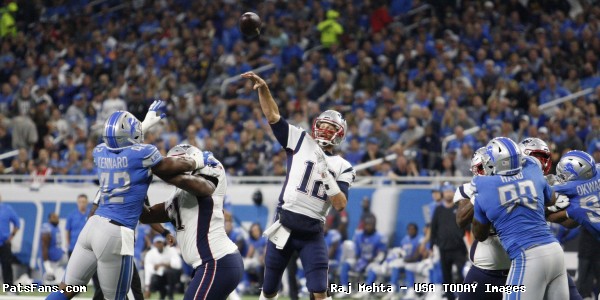 Unfortunately, that would be the only time they’d see the end zone and it capped off a night that will hopefully go down as a speed bump in a season that if all goes well, will look much different in December than it does right now.

However, for that to happen, they’re going to need to make some serious changes.  As it is, the Patriots came into this season with some huge question marks after Bill Belichick’s gamble on Kenny Britt, Jordan Matthews and Eric Decker each fell flat and he was forced to cut the cord on Malcolm Mitchell after the receiver’s knee never got healthy.  From there, three of last year’s playmakers are obviously gone, with Brandin Cooks having been traded in the offseason to the Rams while Danny Amendola’s getting ready for a return against his former club this weekend after ending up in Miami. They’ll see Dion Lewis later in November when they face his new team, the Titans.

As it stands right now, the receiver position remains a problem. With Julian Edelman suspended, they’ve tried to make it through with Phillip Dorsett and Chris Hogan, with Cordarrelle Patterson being mixed in.  So far, that hasn’t gone too well.  It worked out in Week 1 after the coaching staff did a good job of masking their weaknesses as they got by Houston, but in Jacksonville, Doug Marrone knew how to deal with it and Patricia seemingly built on that performance and completely shut them down.  It was so bad that Brady was back to trying to heave the ball down the field to Dorsett, which never worked last season and certainly didn’t work again Sunday night.

And Brady wasn’t without blame after he let his frustration get the best of him. At one point in Sunday night’s game, when Patterson didn’t run a deep post, Brady still threw deep downfield to where Patterson should have been, likely trying to prove a point. Instead, he ended up being hit with an intentional grounding penalty. That’s something you don’t see very often, and unfortunately it was part of an overall disappointing evening.

Now they have to try and move on from here, but it won’t be easy as their margin of error is a little tighter with three months of football still left to play.

This season, it’s hard to feel all that confident that the road ahead won’t remain long, especially since so much has to go right.  Edelman needs to play at a high level and stay healthy.  Josh Gordon likely won’t put up anywhere close to the totals he did in 2013, but he needs to be at least as good as Amendola in terms of his overall production and ability to get open.  How he performs under pressure will also be interesting to watch, as we all know how good Amendola was in that category. 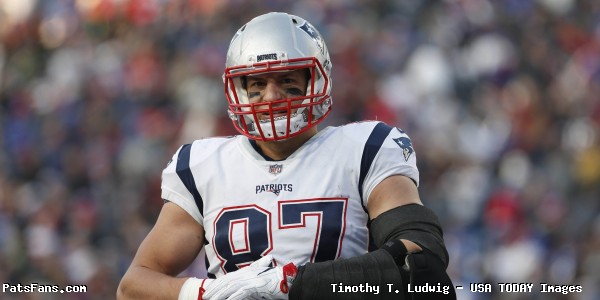 Without any help, Rob Gronkowski has struggled through three games. (USA TODAY Images)

However, the biggest problem they face in their immediate future is figuring out how to move the chains, which has been a huge issue.  To put it in perspective, New England had 46 receiving first downs through three games last season, compared to just 32 thus far.  To take it a step further, the third-down numbers are even more shocking.

Now keep in mind that last season saw Edelman gone for the year after suffering his season-ending knee injury during the preseason, so it’s hard to make the argument that he’s the real reason for their woes.  Last season Brady had completed 71.4% of his passes (20-of-28) on third down to this point, while this year he’s managed a completion rate of just 42.9% (9-of-21).  Gronkowski accounted for 9 of last year’s three-game total, followed by Amendola (4), White (3), Hogan (3) and Cooks (1).  Amendola and Cooks were each players who each drew the attention of defenses and opened things up for Gronkowski to make those plays.  Instead, they obviously don’t have that right now and he’s been seeing double or even triple coverage.

As it is, their supposed top two receivers haven’t done anything on third down.  Brady’s 1-of-5 passing to Hogan (his 7-yard touchdown in Week 1) and 0-for-3 to Dorsett.  That’s certainly not what you’re looking for and the drop off from last year’s group is pretty staggering.

The worst part is, there’s no real answer in sight.  It’s doubtful they’ll bring another player in as neither Dorsett or Hogan are going anywhere. The hope might be that when Edelman is back and if Gordon can play well, they can somehow make it work.  But again, that’s provided everyone can play at a high-level every week and no one gets banged up or injured.  That’s asking a lot over the remaining 13 games, which would turn into more if they make the playoffs.

Their other glaring issue, which could potentially be what buries them if Edelman can’t play in all of their remaining games or if anyone does get hurt, is going to be their inability to beat one-on-one coverage.  That’s where Danny Amendola excelled and he was the missing piece that helped them win each of their two championships.  What’s made New England’s offense so effective in the past is the fact that with Amendola and Edelman healthy, even without Gronk, defenses couldn’t deal with both players and they always had one other player who could also get open.  Mix in the running backs and they always had enough to make it through and they put up enough points to mask the problems they had on defense.

This year, that hasn’t been the case and now they’re 1-2 with quite a few tough games still left to play. With the team already behind in the division and so many problems still left to solve, the idea of a top seed should be the farthest thing from anyone’s mind.  Having just lost back-to-back games, the only thing fans should be focused on his hoping they can keep from making it three in a row with a 3-0 Miami team that will likely come into this week with plenty to prove.

Fortunately, Miami’s not lighting things up on offense, coming into this game 23rd in the league in total yards and 27th in 3rd down efficiency.  That’s good news for a Patriots club that isn’t playing well defensively to this point, but they’re still going to need the offense to turn things around after two straight weeks of misery.

But make no mistake, this is going to be a long season full of growing pains and plenty of things that will need to work out perfectly in order for Brady to have a shot at getting his team back in position for another championship run.  The only question is going to be whether or not he’ll have the weapons he needs to get them there.

Needless to say, this may be the biggest number of question marks we’ve seen in some time and fans should brace for the worst and hope for the best.  That may not be what people want to hear, but with Brady still under center and Belichick on the sideline, there’s still a chance things could get better.

Unfortunately, until that happens it’s going to lead to some tense Sundays moving forward until they hopefully figure it out.

READ NEXT:
Patriots – Dolphins Week 4, Key Matchups, Who Has the Razor’s Edge?
Posted Under: Patriots Commentary