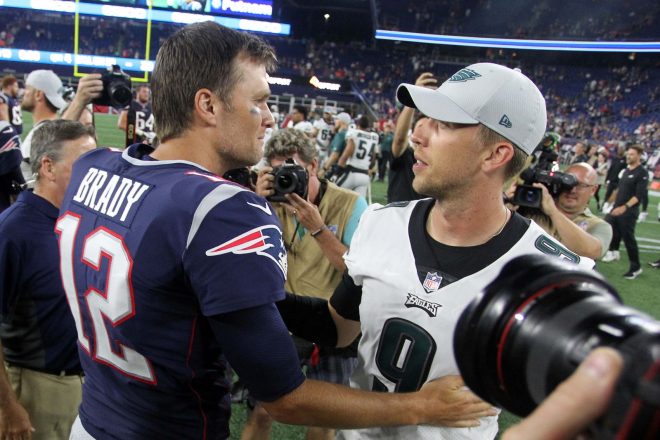 The Patriots entered week 2 of the preseason with a little extra “hype” surrounding their matchup with the defending Super Bowl champion Philadelphia Eagles.

While the game wasn’t going to be a true “rematch” of the defeat back in February, there were enough reminders of the Super Bowl thanks to the Eagles fanbase.

Quarterback Tom Brady, who didn’t see any action against the Redskins a week ago, was reportedly expected to play the entire first half, and he didn’t disappoint.

“No one ever drowned in sweat.” – U.S. Marine Corps. #GameDay

The Patriots, after forcing a three and out to start the game, Brady immediately kicked the offense into gear with some help from James “Sweet Feet” White

Brady, a perfect five for five on the opening drive, found Chris Hogan for the games first points.

Tom Brady's first drive of the preseason: 5-for-5, 26 yards, and a touchdown pass to Chris Hogan.

In what would become a recurring theme throughout the night, the Patriots defense made Eagles quarterback Nick Foles uncomfortable, and quickly off the field.

Patrick Chung with the big sack on 3rd down! #PHIvsNE #Patriots pic.twitter.com/8C9WuiclLH

The Patriots have already forced more Philadelphia punts tonight (two) than the did in all of Super Bowl LII (one). Good start for the defense.

A Stephen Gostkowski 37-yard field goal put the Patriots up 10-0  after one quarter of play while Tom Brady looked as smooth as ever.

At the start of the second quarter, the good feelings were brought to a halt, when rookie tackle Isaiah Wynn was carted off the field with an ankle injury.

It was then reported on Friday that Wynn tore his achilles and will miss the entire 2018 season.

Isaiah Wynn is getting taken off on a cart. That’s not good. pic.twitter.com/77gY81h2nN

#Patriots injury update: Isaiah Wynn is being evaluated for an ankle injury. #PHIvsNE

The defense continued to make big plays, as newcomer Adrian Clayborn forced a strip sack that was recovered by rookie Ja’Whaun Bentley and returned 54 yards for a touchdown.

17-0 Patriots at the 12 minute mark of the second quarter.

Brady was in midseason competitive form.

Lol Tom Brady yelling “Fucking Bullshit” after not picking up the 1st down #PHIvsNE #Patriots pic.twitter.com/WdpYPVfD8w

With 6:29 to go in the second quarter, the Eagles got on the scoreboard by way of a four yard touchdown pass from Nate Sudfeld to Shelton Gibson.

The new additions continued to shine on Thursday night, as wide receiver Cordarrelle Patterson showed off his speed.

James White and the offensive line aided Brady with another touchdown under two-minutes in the half.

Y’all need to stop sleeping on my dawgs!!! @SweetFeet_White too nice with that pigskin boiii! give that man respect!

At the Half the Patriots found themselves up 27-7 as Brady’s impressive night came to a close.

In the second half, the young Patriots defense continued to impress as rookie Christian Sam came up with an interception.

The turnover led to Cordarrelle Patterson’s first touchdown as a Patriot from backup Brian Hoyer.

Since trailing 17-0 in the first half last week, the #Patriots have outscored opponents 60-14 #Patriots #PHIvsNE.

Midway through the third, the Eagles offense put together consecutive scoring drives for the first time all night, with Sudfeld finding Richard Rogers and Rashard Davis to bring the score to 34-20 after three quarters.

In the fourth quarter, Gostkowski nailed 29 yd field goal and that would be it for the scoring as the Patriots would go on to win their second preseason game of 2018 by a final score of 37-20 on an all around impressive showing by both sides of the ball.

#Eagles get moral victory when Brady hugs Foles after the game pic.twitter.com/qCTSZZYKKJ

A sweet shout out from @sweetfeet.

Back to the practice field. Good win last night! @jwhiteprod thanks for pic