5 years ago at 7:46 am ET
Follow @SteveB7SFG
Posted Under: Patriots Commentary 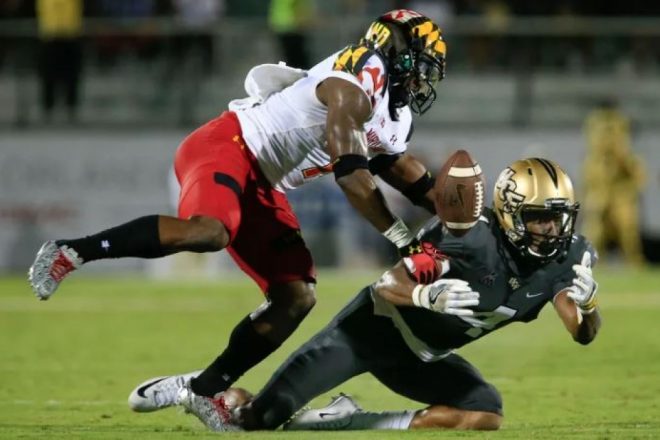 Every year, like clockwork, the Patriots bring on a bevy of undrafted free agents and it seems at least one sticks on the roster, many times carving out a nice role for themselves. Malcolm Butler just left and signed a big contract with the Tennessee Titans but a few years ago he was an undrafted free agent like this latest crop and no one gave him much of a chance to make the roster.

We remember early in his first year after a training camp practice, he came over to the media area on the side of the practice field and was hardly spoken to until about midway thru training camp. No one believed he’d make the cut. He soon changed a lot of minds and was, after that, a popular player to interview. This year’s crop of free agents? Several look very intriguing but the best of the group may be former Maryland Terrapin cornerback J.C. Jackson.

Jackson started his college football career in Florida and almost ended up in prison. He was arrested for a felony, an armed home invasion but was later found not guilty. But that was the end of his career as a Gator. He went to a junior college and played his last two seasons at Maryland for head coach D.J. Durkin, who was the defensive coordinator at Florida during Jackson’s first college season

Durkin believed enough in Jackson to give him a fresh start and he made the most of it. Jackson himself believes that he’s a different person now and knew he was not on the right track. He’s straightened his life out and has made quite a turnaround.

He started in 23 of 24 games for Maryland and in 2017 made 40 tackles, three interceptions, with seven passes defensed. The Terps had a terrible season last year, but it had more to do with their rash of QB injuries as much as anything else. Because of this, Jackson largely flew under the radar.

But that is just scratching the surface. Jackson is a tough physical, if slightly undersized corner who is solid in run support, tackles well and provides very good man coverage.

Jackson has good athleticism and he will fight for the ball at the high point. While he isn’t a burner and doesn’t possess great top end speed, he’s quick off the line and at the snap he can lock up with a receiver and is very physical.

His first step quickness may lend itself to the slot if that is where the team decides to move him, something he’s already said that he isn’t averse to. He’s done a really good job of disrupting the timing of receivers, which is essential at the next level.

He’s solidly built and wants to get in on every tackle. Some of the things that he’ll have to work on with the Patriots, like many college corners, he tends to get grabby if he misses his jam at the line of scrimmage. While he’s shown good recovery, he is a bit stiff in the hips at times when a receiver is coming out of his breaks.

Jackson would immediately challenge for a role on the Patriots Special Teams, which everyone knows is the first step to making the team. But with his physicality, and ability to play either outside or in the slot, he has as good a chance at any at sticking on the roster.

The odds-on favorite to win the slot battle rest now with Jonathan Jones who played well there before ending up on IR with a foot injury, or recently drafted Florida corner Duke Dawson. But if he’s not completely ready to go when the Patriots on-field OTA work begins, it may open the door for some solid competition

The Patriots right now have Stephon Gilmore, Eric Rowe, Jason McCourty, Jonathan Jones, Cyrus Jones, Jomal Wiltz, Ryan Lewis, as well as draft picks Duke Dawson and Keion Crossen with Jackson makes a pretty crowded roster at the position but there will be some opportunities to turn some heads this spring.

I like his compete level, the ability to play either man coverage or zone and his willingness to fire up inside on run support. He’ shown the ability to undercut routes and has the ability to get better in all phases of his game.

Jackson is a guy whose best football may be in front of him. He’ll be a guy we’ll watch closely as minicamps and training camp is just around the corner.

His highlight film from 2017 courtesy of Sky Designs: