5 years ago at 9:40 am ET
Follow @SteveB7SFG
Posted Under: Patriots Commentary 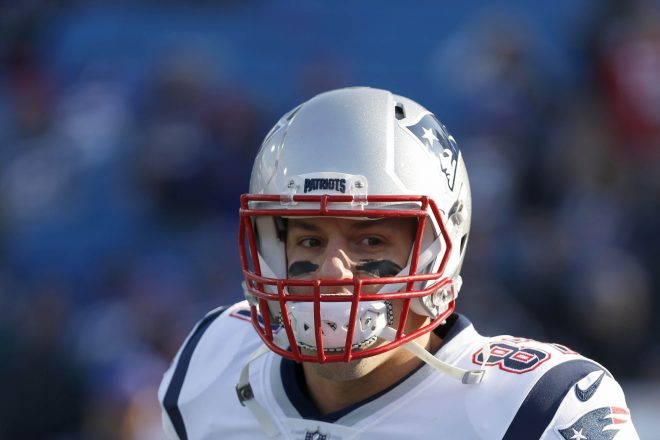 Well, file this one under unexpected developments. Apparently, the rumors about Patriots tight end Rob Gronkowski possibly stepping away from the game and retiring are true after all.

Despite having an outstanding season, Curran reports that Gronkowski didn’t enjoy himself during the season and was growing increasingly frustrated.

“(Gronkowski) did not have a good time despite the fact his body was in a better situation than it’s been in a long time — ever maybe. Despite the fact that he’s one of the most dominant players at any skill position, it’s starting to wear on him physically, mentally, the atmosphere in New England.”

Curran reports that during the rigors of training camp, there was a growing discontent with the training staff over the workout regimens and that Gronk was “pissed.” That could mean a variety of things but it may mean more of the Alex Guerrero saga will raise its head again. Gronkowski supposedly has been seeking out Brady’s personal body guru and there is a chance that it was a sore subject with the training staff.

If that is the case…this won’t go away easily. Curran added, “I don’t think that some of the principal players on this team were really happy with the atmosphere and the climate … they still need to have a hell of an air-clearing at Patriot Place to get these guys back.”

Mark Daniels of the Providence Journal, approached Gronkowski during the season about Gronk using the Guerrero method and that the Patriots tried to stop him from writing about the TB12 method. In the end, Gronkowski wanted to talk about it and he gave Daniels the story anyway.

It certainly would seem that there needs to be a sit-down with the veteran leaders of the team with the coaches and ownership and clear whatever bad air is still lingering over what may have been a tense atmosphere in Gillette last season.

Our original thought here over the retirement rumors was that Gronkowski was just frustrated at the way the season ended and would take stock of his situation and bounce back. It was also a nice way to get the team to sweeten the pot a little bit with a contract extension.

One could hardly argue with that line. He’s suffered a myriad of injuries in his NFL career and has grown increasingly frustrated at the one set of rules for defending him as opposed to everyone else. Opponents get away with a lot more leeway when trying to contain him, with a ton of grabbing, holding, hitting well after the five-yard limit as well as targeting. We saw what happened late in the season when he blew up against Buffalo and took out his frustrations with a cheap shot after a play that resulted in a one-game suspension.

But this is different. This changes the landscape quite a bit. Curran’s source has to be with Gronkowski himself or someone within his close circle, no doubt a member of his family. And the source of frustration goes much deeper obviously. His family has always been fiercely protective of him and they’ve always had his best interests at heart.

Gronkowski caught 69 passes for 1,084 and eight touchdowns and was named to his fourth First-Team All-Pro selection of his career in 2017. In the playoffs, he added 16 catches, including nine for 116 yards and two touchdowns in the Super Bowl against the Philadelphia Eagles.

If Gronkowski is truly serious about retiring, then the team would probably want him to do it now rather than later this summer. The Patriots will have some serious decisions to make. With both Martellus Bennett and Dwayne Allen free agents, they may opt for both, one of which or neither to return. Those decisions may rest on if Gronkowski decides to call it a career at 28.

But make no mistake, regardless of what Gronkowski’s decision is, neither Bennett nor Allen will play for the team with what they are currently slotted to earn. That won’t change. Either or both have some serious renegotiating to do. If both aren’t brought back and Gronkowski does indeed retire, tight end becomes a huge area for an upgrade as that will leave them with Jacob Hollister and Will Tye.

No can fault Gronkowski if he’s had enough, he’s been thru a slew of surgeries, more than many players have that have played much longer than him. If this has to do with hurt feelings over his training regimen, then the parties need to sit down at Gillette and get the dialog going. The clock is ticking, and it is decision time for everyone involved.