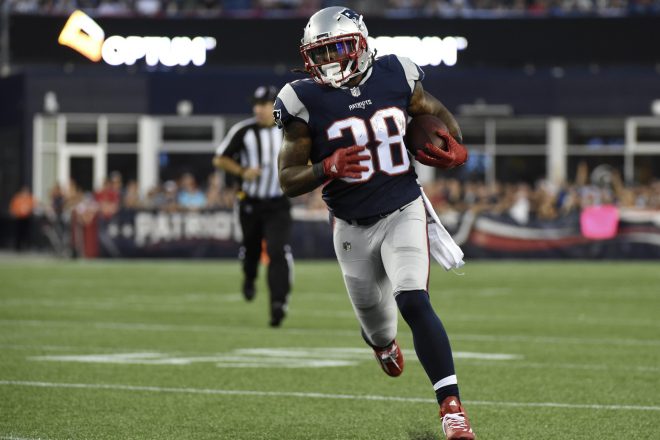 Brandon Bolden is returning to the New England Patriots for a seventh season.

Bolden, signed as an undrafted free agent in 2012, has spent most of the last two seasons on special teams after coming into the league as a running back. This past season, Bolden was with the kickoff coverage, kickoff return, punt coverage and punt return units, recording eight special teams tackles.

From 2012-2015, Bolden had over 200 carries with six touchdowns. In 2017, Bolden recorded just 13 carries for 67 yards but did score a touchdown during the Patriots AFC Divisional round victory over the Tennessee Titans.

In August 2017, head coach Bill Belichick spoke highly of Bolden’s contributions to the franchise over the years;

“Brandon’s played for us on all three downs. He’s played on early downs, he’s played in sub situations. He’s a smart player, has a good set of skills, He can run, he can catch, he can pass protect. He’s given us a lot of production and leadership in the kicking game.”

“He does a good job in the room – whether it be in the running back room or the special teams room – of being prepared, helping out the younger guys,” Belichick continued. “He’s a good communicator, so things on the punt team, punt return where things can happen pretty fast and you need to make some adjustments – he’s good with that. Very good in blitz pickup, and in his understanding of the passing game. He’s a four-down player – three-down offensive player with versatility in the kicking game and all different phases.”

With Bolden back in the fold for 2018, he adds depth to a thin running back group with James White, as Dion Lewis and Rex Burkhead enter free agency.