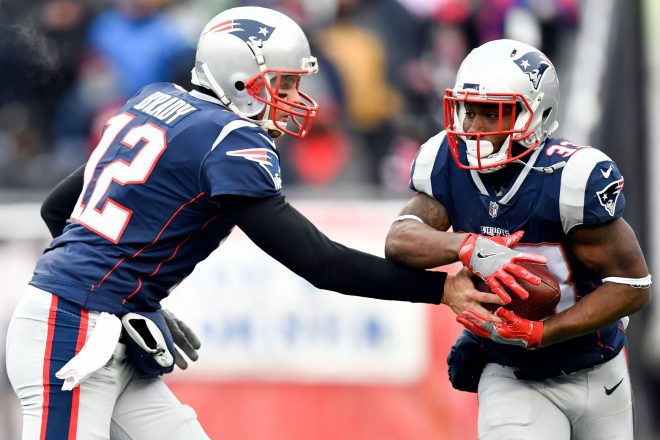 The New England Patriots remain at home at Gillette Stadium for the AFC Championship Game against the Jacksonville Jaguars.

This week’s game will be broadcast by CBS on Sunday, January 21, at 3:15 p.m. ET and can be seen on WBZ-TV Channel 4. Jim Nantz will handle play-by-play duties with Tony Romo as the color analyst. Tracy Wolffson will work from the sidelines... The game will also be aired on the Patriots flagship radio station 98.5 The Sports Hub with Bob Socci and Scott Zolak on the call, produced by Marc Capello.

The Jaguars (12-6) jumped out to a huge 21-0 lead over the Pittsburgh Steelers and then kept the heat on the Steelers defense by gouging them for 45 points in a 45-42 win in Pittsburgh.

The Patriots and Jaguars have a limited history against one another since Jacksonville entered the league in 1995. Sunday’s game will only be the 12th time the two teams have met. But the conference championship game will mark the fifth time the teams have met in the playoffs.

New England holds a 10-1 overall record including 7-0 at home over the Jags. The only game Jacksonville has won was a Divisional Playoff game in 1999. The teams last met in Foxboro early in the 2015 season, but not much can be gleaned from that matchup as both rosters have undergone a host of changes since them.

The Patriots running game has been extremely effective since Dion Lewis has taken over as the primary running back. He and Rex Burkhead, who should return from injury this week gives New England a dynamic 1-2 punch that is effective in the passing game as they are in the running game.

The Jaguars have a big, physical front and speedy outside linebackers that flow to the ball really well. But as aggressive as they are on defense at rushing the quarterback, they can be run on if you run the ball right at them. The slow developing stretch runs to the outside won’t work with the speed of the linebackers.

Look for Lewis and Burkhead to run to the weakside this week. Yannick Ngakoue is a slightly undersized but athletic defensive end as they try to keep the Jaguars defense from just teeing off on the quarterback. The key from a New England perspective for the running game is keeping the third downs to manageable distances.

The Patriots passing game got some of their weapons back last weekend and it was no surprise that Tom Brady threw for 337 yards and three touchdowns. Now with Burkhead back, the backs in the passing game should be able to be at full strength too with Burkhead, Dion Lewis, and James White. Chris Hogan, Brandin Cooks, and Danny Amendola are the outside wide receiver targets and TE Rob Gronkowski remains the big mismatch in the middle.

Jacksonville’s defense allowed just 169.9 yards per game during the regular season by combining an outstanding pass rush that got 55 sacks and great coverage by their cornerbacks on the outside with A.J. Bouye and Jalen Ramsey. Calais Campbell led the way with 14.5 sacks and Ngakoue was next with 12.

Look for the Patriots to mix their “11-personnel” with 3 WRs and 1 RB with Danny Amendola on the field with their “21 personnel” with 2 WRs, 2 RBs and a TE to keep the Jaguars defense guessing. With their big pass rushers, the key from NE’s perspective is to go hurry up as soon as the team makes a first down. They want to stop the Jaguars from substituting freely on the defensive line and hopefully wear them down.

Gronkowski and the backs are the keys for Brady this week in the passing game. Both of their safeties are dinged up a little bit and look for Brady to get Gronkowski involved early and often. The running backs are the big keys for New England in the passing game. The Jaguars corners should match up well with the wide receivers outside the numbers but another big key will be the quickness of Danny Amendola inside the numbers. Brady will look to get the ball out quickly, think of the game plan against the Seahawks (which is very similar to Jax), or the Falcons defenses.

Next up the Jacksonville offense:

The Jaguars have the top-rated running game in the league with the big man Leonard Fournette providing the bulk of the heavy lifting inside. Fournette smashed the Steelers to the tune of 109 tough yards and three touchdowns on Sunday. Chris Ivory was a healthy scratch and T.J. Yeldon is the change of pace and a good receiver out of the backfield with Fournette.

QB Blake Bortles has been very effective at scrambling out of the backfield and is very good at moving the sticks when there is no one open in the receiving patterns.

The Patriots struggled against the run all season and allowed 114.8 yards per game, which is coincidentally less than Jacksonville did (116.3 ypg). But in the last three games, the run defense has noticeably stiffened allowing a total of 189 yards (63 ypg). With Allen Branch and Kyle Van Noy back and healthy as well as the addition of James Harrison, it is a different unit now.

Look for the Jags to try to pound Fournette as they did all season to make third-down conversions for Bortles easier where they’ll have a run/pass option. Yeldon is a bit of a wildcard here. How well the Patriots do or do not cover the run will go a long way in this one. Their game plan will be to force the ball into Bortles’ hands and make the Jaguars win that way.

The Jaguars passing game is a microcosm how Bortles’ season has gone. When he has played well, the Jaguars have been very difficult to stop. And when he’s not, he’s looked at times awful. He had a poor playoff game against Buffalo which he turned around and had a very solid game against the Steelers.

With Allen Robinson on IR, the Jags have Marquise Lee, Allen Hurns and rookie Keelan Cole who shined when he was here during the joint practices/preseason game this summer. Tight end Marcedes Lewis is their leading touchdown receiver with five and provides a good weapon in the middle of the field.The aforementioned Fournette and Yeldon give Bortles good but not great weapons in the passing game.

The Patriots secondary has been much much better since the first month of the season. They have a trio of good corners in Stephon Gilmore, Malcolm Butler, and Eric Rowe. The pass rush has heated up down the stretch and had a franchise record eight sacks against Tennessee last week.

Look for Bortles to play action pass on first down a lot here, trying to catch the defense selling out to stop the run. That is a key for both teams this week. If the Patriots can force the ball into Bortles’ hands in constantly having to throw on third down, that’s the matchup the Patriots will win. The edge rushers must stay disciplined and not get past him to allow scrambling for first downs.

The Patriots’ Special Teams continue to be among the best in the NFL, they excel in punt and kick coverage and continuously turn in big plays. Stephen Gostkowski had a very solid season and his kickoffs consistently put opponents deep in their own end. Ryan Allen is very adept at pinning opponents inside the 20 and the team has perennial Pro-Bowl ST player Matthew Slater on the coverage units.

The Jaguars punter Brad Nortman had a punt blocked against the Steelers last week, something that STs coach Joe Judge may opt to try again. The Jaguars have good return teams and solid coverage teams as well. But at home, the nod goes to NE and Gostkowski who has had a very solid season.

Well with the hoopla around Tom Brady’s hand/thumb injury the past few days, unless rule him out, I’ll assume he’s playing and will be his usual self. Since his ACL injury in 2008, when the last time that Brady missed a start? Exactly.

This should be a good chess match as both teams will jockey for field position to give their offenses a shorter field.   Brady has faced similar defenses like the Jaguars run against the Seahawks in the past, I look for them to go hurry up as soon as they make a first down. The Jags corners and pass rush are very tough obstacles but as we’ve seen Brady will try to get the ball out in two seconds or less as they slowly work the underneath and middle routes, targeting the linebackers and safeties in coverage with Gronkowski and the trio of running backs. Danny Amendola may be the forgotten man in terms of defensive game planning, but he always rises to the occasion in the playoffs. And this is a battle-tested unit.

The Jaguars are a QB away from being a Super Bowl favorite soon but are they there yet with Bortles? I don’t think so. I equate him similar to Mark Sanchez with the 2010 Jets. They got to the conference championship game with great defense and a game manager QB. I see this one playing out similar to that season. With all the talk of the Jaguars defense (and it is deserved), no one is talking about New England’s defense which has been very stingy in allowing points. Well, they keep it going, Not Done Yet. Patriots 27-17