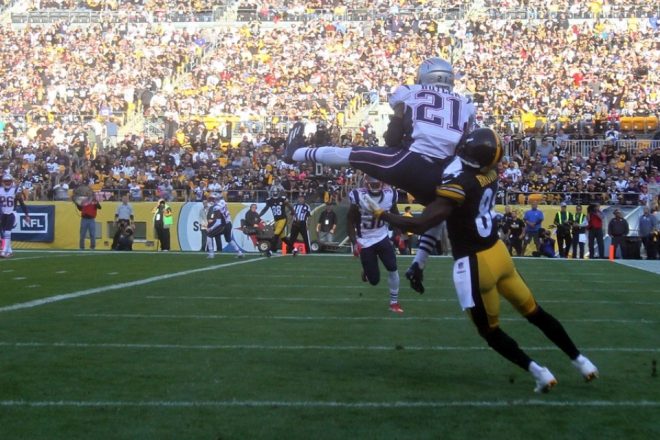 Watching Antonio Brown run up and down the field against the Ravens last week was a reminder that the Patriots will definitely have their hands full as they try and slow down an explosive Steelers’ offense on the road.

During their last meeting in the AFC Championship Game, it was Malcolm Butler who once again was given the duty of trying to slow him down, and he was relatively successful.  Butler and Brown battled it out and the Steelers’ receiver was held to just 77 yards on 7 catches on an afternoon where the Steelers couldn’t get much going.  But the bigger story after the game was the fact that even when his team did have success, Brown was seen “pouting”, which happened after DeAnegelo Williams scored Pittsburgh’s first touchdown.

Aditi Kinkhabwala of NFL Network reported on the incident after the game, which showed a different side of Pittsburgh’s star receiver.

“I was sitting with Hines Ward … we were sitting next to each other last night, DeAngelo Williams scores the Steelers first touchdown. Antonio Brown was wide open in the back of the end zone and he pouted,” said Kinkhabwala.  “Guys, he pouted! His team just scored a touchdown and he was upset that he was wide open and Roethlisberger didn’t go to him. Roethlisberger was then waiting on the sideline, Brown was the last player off the field. Roethlisberger had to talk to him.”

“Instead of those minutes next to Todd Haley … he had to sit and worry about Antonio Brown’s ego.”

There’s a reason why Brown might have been so miserable.  According to Pro Football Focus, Brown caught just two passes with Butler on him that day,  clearly frustrating the Steelers’ receiver to the point where after the game he was too embarrassed to talk to the media.

That seems to be the theme with the Steelers.  When things are going well, they’re on top of the world and tend to talk about what a great team they are.  When things don’t go their way, they hang their heads, contemplate quitting, and things get ugly.  That seems to be the mantra of a Pittsburgh team that just hasn’t been able to figure out a way to win the big game and you tend to learn a lot by how clubs react during times of adversity.

Needless to say, hopefully if all goes well, Butler will have Brown pouting again this weekend.