5 years ago at 9:16 am ET
Follow @SteveB7SFG
Posted Under: Patriots News 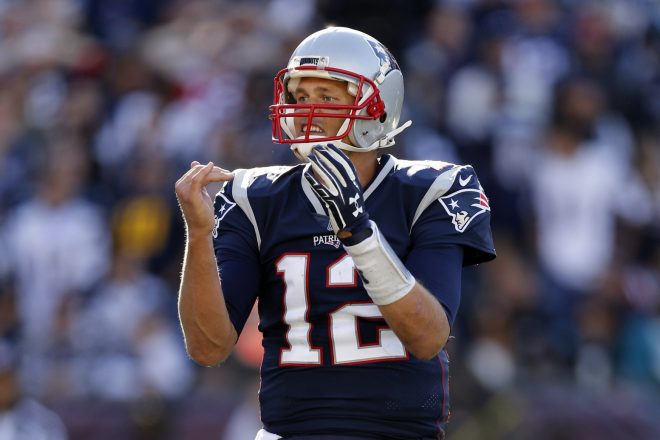 The Patriots return home for one game this week against the Miami Dolphins before heading back out on the road for a three-game road trip. In a weird quirk in the NFL’s scheduling, the Patriots and Dolphins meet twice in three weeks.

This week’s game will be broadcast by CBS on Sunday, November 19 at 1:05 p.m. and can be seen on WBZ-TV Channel 4. Ian Eagle will handle play-by-play duties with Dan Fouts as the color analyst. Evan Washburn will work from the sidelines.The game will also be aired on the Patriots flagship radio station 98.5 The Sports Hub with Bob Socci and Scott Zolak on the call, produced by Marc Capello

The Patriots (8-2) are coming off a very successful two-game road trip with blowout wins coming against the Denver Broncos 41-16 and last week in Mexico City against the Oakland Raiders 33-8. Tom Brady continues his torrid pace in 2017 and the defense for the sixth game in a row allowed 17 points or less.

The Dolphins (4-6) have lost four in a row and in danger of falling out of the playoff race after entering the season with so much hope of earning back to back playoff berths.

The Patriots and Dolphins history has been a streaky one with Miami holding an overall 53-50 lead all-time in the teams’ rivalry. However, the Patriots have won 11 of the past 14 meetings including the last eight at Gillette Stadium. The Patriots swept the series last season, 31-24 in Week 2 with Jimmy Garoppolo and Jacoby Brissett at the helm and in the regular season finale 35-14 in Miami.

The Patriots running game has been improving with Dion Lewis taking over the bulk of the running game with Rex Burkhead getting the complimentary carries and James White just a few here and there. Mike Gillislee has been a healthy scratch for two weeks in a row. The Patriots haven’t run the ball a ton lately because they’ve been so adept at passing it but this week could see more emphasis on the running game.

Miami for the first month of the season looked vastly improved in the running game. But during their losing streak, they’ve been getting gashed by the run. Having released Rey Maualuga at middle linebacker won’t help matters as he was impressive as a run stuffer.

Look for the Patriots to mix things up quite a bit this week. Miami’s defensive ends will be looking to influence the passing game by teeing off, so they’ll attempt to run right at them on Sunday.

The Patriots passing game is averaging over 300 yards per game, tops in the NFL. Tom Brady has been brilliant about spreading the ball around to a plethora of different receivers and they’re continually able to find mismatches. With their wide receivers banged up, they haven’t missed a beat.

Miami’s pass defense is allowing just 229 yards per game but opposing QBs are completing nearly 70 percent of their throws and have an average passer rating of 104.3 which is second worst in the league.

Look for Brady to work the tight ends, Rob Gronkowski and Martellus Bennett as well as the running backs, James White and Rex Burkhead heavily into the mix this week. The Dolphins pass rush has had issues getting to the QB, and if Brady has time, he’ll carve them up in death by 1000 cuts.

The Dolphins traded their top running back Jay Ajayi to the Eagles earlier in the season and now are going with Damien Williams and the intriguing Kenyan Drake who’s averaging about 5.5 yards per carry. The Dolphins have been struggling to run averaging just 80.4 yards per game and score, with just one rushing touchdown on the season.

The Patriots run defense has struggled in 2017, with Malcom Brown injured and Vincent Valentine and Dont’a Hightower on IR, the middle of the line has been suspect. Coupled with less than stellar play that we’ve come to expect from Alan Branch, it is an issue. The Raiders ran the ball effectively last week but the Patriots jumped out to such a big lead they were forced to abandon it.

Look for Miami to feature Drake more this week. Williams has been the de facto starter since Ajayi left but that may change as they are looking for answers to get their offense untracked. And we feel here, Drake will have a solid day on the ground.

Miami’s passing game has been mired in mediocrity since Ryan Tannehill went down in camp. The team signed Jay Cutler and he hasn’t gotten it done. With the targets he has in the passing game with Jarvis Landry (3rd in the NFL with 67 catches), Kenny Stills, DeVante Parker, Julius Thomas at tight end and the running backs, the Dolphins passing game should be its strength.

The Patriots pass defense is playing much better since a nightmarish start to the season. Stephon Gilmore and Malcolm Butler did a fine job on the duo of Michael Crabtree and Amari Cooper last week. Landry is their go-to guy to move the sticks but Stills is the Miami big play guy and if Eric Rowe isn’t ready to go, that will fall to Jonathan Jones, who has played well this year.

Cutler was in concussion protocol this week but did return to practice, albeit in a limited fashion on Thursday, which means he probably passed. If so, he’ll probably get the start but one has to wonder if the Dolphins would be better suited to go with the steady if unspectacular Matt Moore in there.

The Patriots’ Stephen Gostkowski was the AFC STs Player of the Week after booting a pair of 50+ yard field goals (62 and 51) in a 4-4 day against the Raiders. His short kickoffs coupled with outstanding coverage has put the Patriots in great advantageous position. Ryan Allen’s punting has been steadily improving and it seems like every week the Patriots are getting big plays from their STs units.

The Dolphins Special teams have been playing very well. Their own coverage units are very solid and they have a pair of very good kickers but their return game hasn’t had a big impact. With the way New England’s STs units are playing right now, they get the nod.

This one will be an intriguing one to keep an eye on. The Patriots will want to get off to a fast start and see if Miami, who has dropped four in a row answer the bell or pack it in. Two of their four losses in the last month have been blowouts. The Patriots secondary has been much, much better the past month and I look for them to continue that trend this week. It is a much different atmosphere for the Dolphins when they play at Foxboro. They haven’t won in New England since the Wildcat game in 2008 when Matt Cassel was the QB for New England.

Look for Tom Brady to spread the Dolphins out and find the mismatches underneath. Getting T.J. McDonald back from an eight game suspension should help in defending the tight ends, but he and Reshad Jones can only do so much. The running backs in the passing game may open up some down the field options for Brandin Cooks.

The Patriots hold serve at home with another big win and head to Buffalo at 9-2.  Patriots 34-16