5 years ago at 10:34 pm ET
Follow @bob_george
Posted Under: Uncategorized 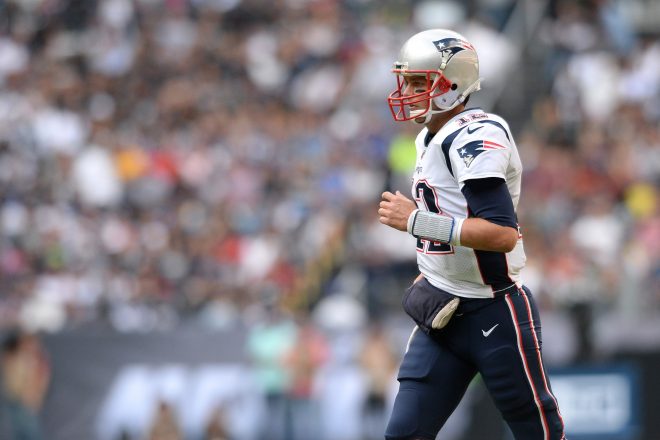 They want to put an NFL team in Mexico City, but London may get one sooner.

What difference does it make? Put a team in Japan, China, Australia, or even sub-Saharan Africa, and Tom Brady will be good for at least 3 touchdown passes and the Patriots a blowout win. London has proven to be Patriot-friendly, and now you can add Ciudad de Mexico to that list. In three games outside the USA, the Patriots are 3-0 with an aggregate score of 113-22.

The Patriots made their first regular season appearance in the Mexican capital city, their second overall visit in 20 years, and their second straight game in high altitude. Mexico is an intriguing country, with a broad spectrum between opulence and poverty, where retail prices are always negotiable, and with the always intimidating Montezuma’s Revenge (which is why the locals will tell you “No bebide el agua!”). Mexico City is the most populated city in North America, with three times more people than New York City, and that is no lie.

The Patriots are the better team on paper against the Oakland Raiders. But the on-field gap between the two cities is as wide as the Golfo de California. Bill Belichick kept his team all week in Colorado Springs at the Air Force Academy to acclimate to a higher altitude than Denver, where they spent last weekend and enjoyed a rare win in the Broncos’ crib. Oakland’s head coach Jack Del Rio kept the Raiders at home and came to Mexico on Saturday.

Maybe the altitude didn’t matter. The Patriots totally outclassed the Raiders, played fresh most all game long, and came away with a 33-8 win on Sunday at Estadio Azteca, the iconic soccer venue. That’s two blowout wins in a row for the Patriots in high altitude, which is nice considering their track record of playing in Denver, which is 5,280 feet above sea level. Aztec Stadium is 7,320 feet above sea level, but the Patriots could have played atop Pico do Orizaba and have done just as well against the Raiders.

It’s hard to look at the Raiders and think about the fact that they should have been the opponent for the Patriots in last year’s AFC Championship Game and not the Steelers. Derek Carr suffered a season ending leg injury last year just prior to the playoffs, but the former Fresno State quarterback is back and healthy and the Raiders seemed poised to resume their return to greatness, especially now with former Seattle running back Marshawn Lynch in the fold.

Such was not to be. The Patriots came out in a no-huddle offense to try and tire out the Raider defense. They opened the game with a 15-play, 87-yard drive capped off by a Brady touchdown pass to Dion Lewis for 15 yards. Four plays before the touchdown, Oakland blew a chance to shock the Patriots early when Rex Burkhead coughed up the ball after a six-yard run, but Dwayne Allen fell on the football with two Raider defenders all around the ball.

The blown fumble recovery and subsequent touchdown more or less spelled doom for the Raiders, even that early in the game. On the ensuing drive, facing third and 11 at the Oakland 35, Carr tried to hit Johnny Holton deep down the left sideline. The ball glanced off Holton’s shoulder pad and Duron Harmon was able to make the interception. The Patriots failed to score on the ensuing drive, but Oakland took themselves out of their next drive thanks to a pass interference penalty on Amari Cooper.

Brady hit Brandin Cooks for 52 yards, setting up a touchdown pass to Danny Amendola from 5 yards out to make it 14-0 Patriots. The next sequence more or less sealed the deal for the Patriots, as they showed their complete superiority over the Raiders.

Leading 14-0, you take a knee and head for the locker room. Not the Patriots. They have to get that double score.

Brady hit Lewis over the middle for 20 yards, then hit Amendola for 18 yards along the left sideline. A ten-yard pass to Rob Gronkowski over the middle put the Patriots at the Oakland 44 with five seconds left. Stephen Gostkowski came out to try a 62-yard field goal. Kicking from the right hash mark, Gostkowski blasted one which would have been good from 70. It was his career long and a new franchise record long field goal. It looked like the automatic field goals Gostkowski used to kick prior to his yips dating back to last season.

Naturally, the Patriots scored to open the second half. On the third play from scrimmage, Brady found Cooks down the right seam on a post pattern for 64 yards and a touchdown. Gostkowski would kick three more field goals, one from 51, one from 40 and one from 29. A shutout was possible until early in the fourth quarter, when Carr found Cooper for a nine-yard touchdown pass. Otherwise, the Patriots dominated the Raiders completely, and outclassed the Silver and Black in every way.

The Patriots were not impervious to the altitude, although their play on the field suggests otherwise. Both Amendola and Stephon Gilmore had to go to the locker room to be treated for dehydration. The walk to the locker room itself could cause medical problems, as the long upstairs walk caused several players on both teams to have to catch their breath. Otherwise, the Patriots were the better prepared team, and played a near-perfect game.

Brady finished an eye-popping 30 of 37 passing for 339 yards, three touchdowns and a rating of 131.9.   Cooks had easily his best game as a Patriot, catching six passes for 149 yards. Amendola had eight catches for 66 yards. Lewis had 60 yards on ten carries, averaging six yards a carry. Carr finished 28 of 49 passing for 237 yards, a touchdown, an interception and a rating of 68.2. Michael Crabtree led the Raiders with six catches for 51 yards. In his first game against the Patriots since Super Bowl XLIX, Lynch had similar numbers to Lewis, rushing for 67 yards on 11 carries.

The rest of the Patriot season is five of six games against AFC East teams, the one exception being a potentially season-defining tilt at Pittsburgh on December 17. Two of the next three games are against Miami, with a home date with the Dolphins on tap next weekend back home.

But the Patriots will leave Mexico with good memories. Everyone knows about the beach resort cities, the food, and Jose Cuervo. Not much is said about Mexico City other than overcrowding, pollution and the recent earthquake back in September. But Brady had nothing but praise for the city in his postgame press conference. It is a major financial center for North America, with a ton more going for it than most people unfamiliar with Mexico might know.

Whatever the case, the Patriots now head home, and nobody will be complaining. Adios, Mexico!

By: Robert Alvarez
Bill Belichick issues a statement praising Vince Wilfork following his selection into the Patriots Hall of Fame.
20 hours ago