5 years ago at 9:30 am ET
Follow @SteveB7SFG
Posted Under: Patriots Commentary 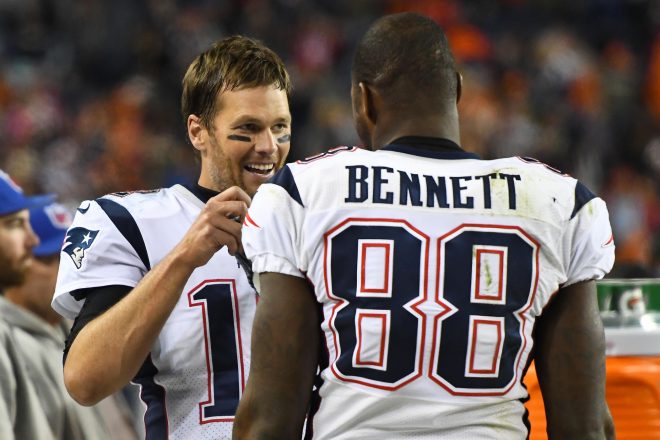 The Patriots quickly put the Denver Broncos in the rear view mirror due to outstanding special teams play on Sunday night and then with a tremendous offensive game plan, kept Denver’s defense off-balance and in chase mode all night long in a 41-16 rout.

With the stadium at Mile High in Denver has been a house of horrors for the Patriots, they’ve now won there in back-to-back seasons. Even more importantly, the win allows the Patriots to keep pace with Pittsburgh having the best record in the AFC at 7-2 and opened up a two-game lead in the AFC East due to Buffalo getting spanked at home by New Orleans.

The “No-Fly Zone” didn’t apply to Tom Brady on Sunday night. Denver’s strength on defense is their three cornerbacks, who are arguably the best in the NFL and their pass rush. So Josh McDaniels and Brady did the smart thing. They got the ball out quickly to negate the pass rush and attacked their weakness, the linebackers in coverage.

In our pregame matchups we pointed out that the place to attack was the linebackers with the tight ends and backs. And Brady was absolutely clinical in doing so, Denver had no answer for that. Brady’s first touchdown was to Rex Burkhead who easily beat his coverage on a skinny post to open the scoring.

Brady used play action passing to freeze the linebackers on more than one occasion but the best one was arguably on the deep 26-yard completion to Gronkowski where there was a huge gap in the coverage. Brady finished 25-34 for 266 yards with three touchdowns and should have had a fourth with the call on Gronkowski being called incomplete when the ball never touched the ground.

Brian Hoyer got to come in late and got in a bit of working going 3-3 including a really nicely designed and conducted screen pass to Brandin Cooks that went for 27 yards.

The running backs were part of the focus this week and they didn’t disappoint. On a night where Mike Gillislee was a healthy scratch, Rex Burkhead and Dion Lewis were the focal points and both had very solid outings.

While the running game wasn’t dominant, it was good enough. Denver, other than last week in Philly has been very stout against the run and getting just under 100 yards kept the defense honest and allowed Brady to run play action.

Lewis didn’t have a catch but was good in the running game, lugging the ball between the tackles. Burkhead provided good power also between the tackles, moving the pile a few times in short yardage and picking up a key fourth down run. He was also very productive in the passing game. Both featured key moments on STs which we’ll get to below.

James White didn’t get a ton of snaps this week but he had a nice touchdown reception from Brady where he put an excellent move on safety Will Parks and had an easy pitch and catch for the score. James Develin was outstanding in run support getting the ball carriers to the second level.

This was more by design than anything else. The team was shorthanded with Chris Hogan out so, they attacked the Denver weak spots using the backs and tight ends. However, they kept Denver’s secondary honest by targeting Cooks 11 times, mostly in short underneath routes. Phillip Dorsett and Danny Amendola were only targeted six times total but responded with six catches.

On a night the coaches were putting the onus elsewhere, the wide receivers still had decent production and did exactly what was asked of them.

Rob Gronkowski had a typical Gronkowski evening, seeing double, at times triple coverage down close to the goal line but still had good production with four catches for 74 yards. He also had a diving 19-yard catch for a touchdown erased by an official ruling that the ball hit the ground, but we’ve beat that horse to death enough.

Martellus Bennett was back in a Patriots uniform and although he played only about 8 snaps made his presence felt, catching 3 passes for 38 yards. His first catch was a big 27-yarder where the Broncos had a communication breakdown (other teams have them too), and two linebackers went after Burkhead leaving Bennett all alone.

Dwayne Allen finally got a catch and it was a big one, a touchdown catch where he was held by Von Miller and then made a nice catch on an outside pass by Brady. He was also very good in the running game. Jacob Hollister didn’t play on offense but had a couple of big plays on Special Teams.

The offensive line heard all week about the fearsome Denver pass rush especially by Von Miller. Miller was facing backup swing tackle LaAdrian Waddle filling in for injured Marcus Cannon at right tackle and had one pressure all night on Brady. Waddle, receiving little extra help, was mainly left on his own and held up extremely well. Ditto for Nate Solder. Shane Ray on the other side was relegated to milk carton status. The only sack given up was on a safety blitz where James White uncharacteristically whiffed on a pass block, with Brady getting sacked inside Denver’s 10 yard forcing a field goal.

The run blocking was okay but not great. But the bottom line is that the Patriots scored on seven straight possessions. That doesn’t happen…ever unless Brady is getting excellent protection. And yes they aced this test.

The Patriots defensive line was good but not great in this one. They did a decent job of defending the run although the Broncos did have a couple of really good chunk plays, most of those came after the team was comfortably ahead. But they were stout in the red zone which is a plus, with the Broncos scoring only one touchdown.

The pass rush however was virtually non-existent. Brock Osweiler was nearly as comfortable as Brady was in the pocket. This will be an area to monitor moving forward but they couldn’t get any consistent pressure even when Matt Patricia dialed up some blitzes.

Kyle Van Noy gets high marks for his continuing high level of play all over the field. With Hightower gone for the year, Van Noy calls the signals for the defense and will rush the passer, cover the backs in the flat and drop into coverage. He read a play perfectly and blasted in dropping Jamaal Charles for a loss on one running play. David Harris got the most work of the season and was very good in run support and put a jarring hit on TE Jeff Heuerman knocking the ball loose. Elandon Roberts got good pressure on an A-Gap delay blitz and forced Osweiler to unload the ball.

Special teamers Marquis Flowers and Trevor Reilly got some work in as Matt Patricia worked everyone into the system and all played well.

While Malcolm Butler had a very rough first half, Emmanuel Sanders had 114 yards receiving by halftime. He recovered however, and played tough and physical in the second half where Sanders could manage just 23 yards after the break. It wasn’t pretty by any stretch of the imagination but Butler has a short memory and he doesn’t get down or sulk when he’s not playing well.

Stephon Gilmore returned from his concussion and played well. He was tasked with coverage on Demaryius Thomas and neutralized him quite well. Thomas had five catches for 44 yards. In Thomas’ nine games previously against the Patriots he has averaged 92.5 yards per game and 16.6 yards per reception. Thomas did snag a touchdown on Gilmore but that was just a well designed play by Osweiler. His play action fake froze the linebackers just long enough and Roberts didn’t get a deep enough drop where he’d have been right in the throwing lane. Thomas had inside position on Gilmore and made the catch for the score.

Devin McCourty was his normally solid self in centerfield and was forced to make a couple of key tackles when Sanders was getting loose. Pat Chung and Duron Harmon played well and Chung got an interception off of Osweiler when he read the play and jumped the route in front of Heuerman.

The Special Teams get very high marks this week for turning in three tremendous big plays that easily turned this game into the laugher that it was. After the Pats were held to a three and out on their first possession, Jonathan Jones flew up the field on punt coverage and Broncos returner Isaiah McKenzie, who has shown a tendency for bobbling punts muffed this one. Jones blasted him, allowing Jacob Hollister to recover the ball. The Patriots would then score on seven straight possessions.

Dion Lewis had a 103-yard kickoff return for a score getting several key blocks including good ones from Hollister and Dwayne Allen. Once he reached the outside, he had clear sailing and no one was going to catch him. That silenced the crowd quickly.

Rex Burkhead came clean on a punt block after a fantastic play by Brandon Bolden freed him up. Bolden caused his man to step out wide and Burkhead burst thru the gap like he was shot out of a cannon. That set the Patriots up with a short field for a score.

Stephen Gostkowski’s kickoffs were a stake in the heart of the Broncos. He dropped them just short of the goal line time and again and the coverage units were outstanding. Trevor Reilly unloaded on McKenzie on one where it was amazing that McKenzie was able to hold onto the ball.

Denver made the night complete by jumping offside on a 4th and 5 where the Patriots lined up to punt. The first down resulted in the Patriots putting another score on the board where they completed a 16-play, 94-yard drive.

Bill Belichick’s team had two weeks to prepare to face a team that always seems to have its way with New England at home. Belichick and the staff came up with a fantastic game plan to attack the middle of the field with the tight ends and running backs and they simply eviscerated a very good, very proud defense where they scored on seven straight possessions. That doesn’t happen very often, if at all to Denver at home.

The players were focused and executed the game plan extremely well. Belichick likes to talk about producing in “All 3 Phases” of the game. The team did it and more. They allowed only one touchdown and just 16 points on defense, scored 41 points and had tremendous splash plays on special teams.

This was the perfect way to start off the second half of the season and a long road trip that will feature five of the next six games on the road.