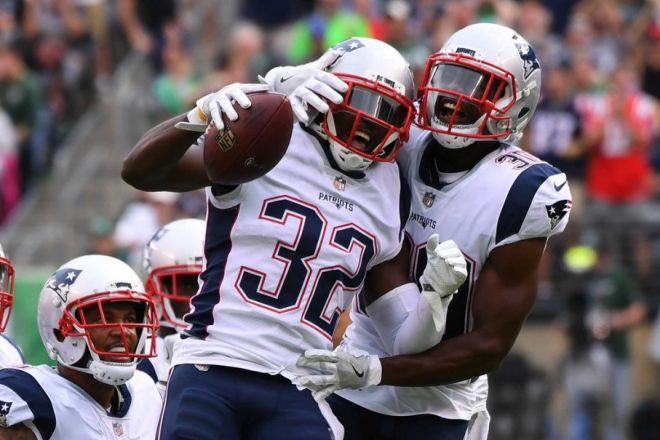 The Jets were given a Bronx cheer by the replay officials in New York just across the river and it played a key point why the Jets weren’t going to overtime. But in the end, the Patriots were able to hold on again 24-17 as Tom Brady became the NFL’s all-time winningest quarterback in regular season history with his 187th win breaking a tie with Brett Favre and Peyton Manning. He’s already the NFL’s all-time leader in wins with both regular season and playoffs combined.

But back to the controversy. Austin Seferian-Jenkins caught a pass at the four-yard line and rolled to the end zone, where just at the pylon, Malcolm Butler tried to and for the briefest of moments jarred the ball free. But Jenkins never really lost control and rolled out of bounds in the end zone in what appeared to 77,562 people in the stands and thousands on television as a touchdown. But NY overturned the call on the field and ruled it a touchback and New England’s ball on the twenty. A huge gift and swing of momentum.

And before my timeline fills up with Patriots Nation telling me it was the right call, switch the teams around and picture Rob Gronkowski rumbling to the end zone and the same play happens….is it a fumble then? It was the worst call in a generally terribly officiated game.

After having 10 days to prepare for the Jets, the Patriots took the first 15 minutes to figure out if the game was at 1:05 not 1:45. The defense was gashed badly on the Jets first drive as Josh McCown looked like a guy QBing a well-oiled machine instead of an offense averaging 156 yards per game. The Jets went 88-yards going 4-4 on third down and immediately thoughts were …”Here we go again.”

The Patriots were gashed on defense and turned the ball over on offense and it was 14-0 Jets before the Pats finally decided to kick it in gear. The lights then came on for Belichick’s crew and they rallied for 24 straight points and seemed poised for taking total control of the game over. But some sloppy play and indifferent defensive play struck again and the team had to hold on for another seat-of-your-pants type of win.

The Patriots recovered from a bad sequence at the end of the half to get a turnover and then went down the field in just 26 seconds to score a game-tying touchdown on a pass from Tom Brady to Rob Gronkowski. Gronk who was interfered with horribly on an earlier non-call where Stephen Gostkowski missed a 47-yard field goal when it seemed the team would go into the half trailing 14-7 or worse.

The Jets were moving but McCown made a mistake when he got greedy. He made a bad decision to throw on the sideline where Malcolm Butler was in great position to jump the route and he did intercepting the ball. Brady then hit a beautiful rainbow play to Brandin Cooks to set the Patriots up at the two where Gronkowski outmuscled rookie Jamal Adams for the tying score.

Receiving the ball for the second half kickoff, Brady marched them down the field where Gronkowski scored his second touchdown of the game getting behind the secondary for a 33-yard touchdown and suddenly New England is up 21-14. It was their best sequence of the day and at that time, they looked poised to put the Jets far in the rear-view mirror. But it was not to be and the team allowed McCown, to march up and down the field in the fourth quarter like they were facing Aaron Rodgers or Matt Ryan, who coincidentally comes to Foxboro next week.

There were positives to report, such as the Patriots not panicking once they got down by 14 points. They raised their level of play on both sides of the ball and showed a ton of resiliency against a division opponent on the road in a loud stadium. On a day where they weren’t playing their best. They rebounded and climbed out of a big deficit.

While they didn’t start or end the game particularly well, the Patriots showed the mental toughness that champions must have.

But there is no sugar-coating the play of the defense where although they ‘officially’ allowed only 17 points, their level of play early and late in the game just isn’t going to get it done.

And now Matt Ryan and the Falcons are coming to town next week, fresh off of blowing a seventeen point lead at home against the Dolphins. One other footnote for the game is to call attention to all of the people who constantly rail about the Patriots making the playoffs because of how weak the AFC East is. Well the AFC “Least” has more wins in Atlanta this season, than the Falcons do.

By: Steve Balestrieri
Jerod Mayo and Steve Belichick, after playing tight man coverage all day, laid off the ball and allowed big cushions, which Rodgers exploited
16 hours ago