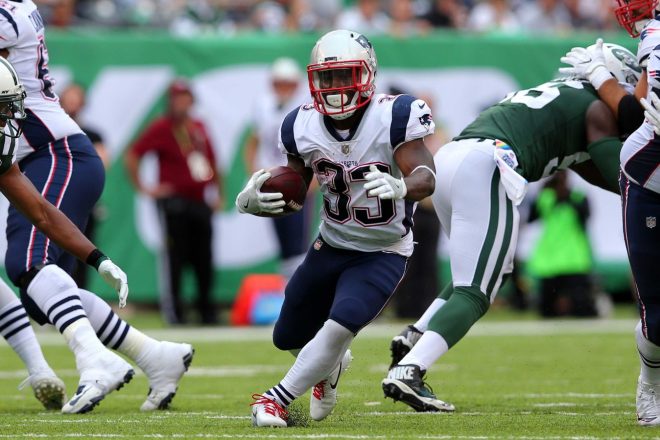 Dion Lewis has had his moments in the early part of the 2017 season, but Sunday’s performance against the Jets was just what the Patriots needed during their 24-17 win down in New Jersey.

Lewis had a strong showing, taking over the lion’s share of the carries after a first quarter fumble by Mike Gillislee in Jets’ territory forced him out of the game.  It sparked a big opportunity for Lewis, with the veteran carrying the football 11 times for 52 yards along with a touchdown.

His rushing touchdown came after a pass interference call against the Jets in the second quarter put the ball at New York’s one yard line.  From there, Lewis took the ball into the end zone and it got New England’s offense started as it was the first touchdown during a 24-3 run that ultimately allowed the Patriots to come back after they initially trailed 14-0.

Nine of Lewis’ 11 carries came on first down, with the veteran averaging 4.7 per carry over that span as well as four first downs.  From there, Lewis had two carries on second down, both of which moved the chains.

It was a productive outing for a player who has seemingly come on as of late, and he was glad he was able to go out there and make the most of his opportunities as the Patriots picked up a key division game on the road.

“Whenever you get a chance, you have to make plays,” said Lewis after the game.  “That’s my job.  I was just happy to go out there, move around a bit, and help my team.”

The victory improved them to 4-2 on the season, which will now see them come home and get ready to take on the Atlanta Falcons next Sunday night at Gillette Stadium.