5 years ago at 8:09 pm ET
Follow @IanLogue
Posted Under: Uncategorized 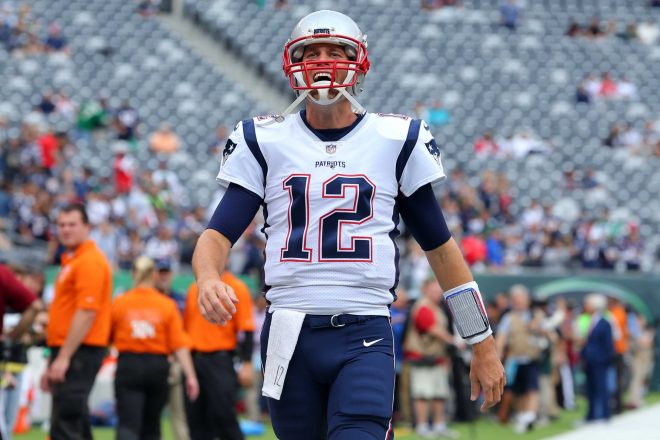 People have questioned Tom Brady’s place among the greats in NFL history, but on Sunday he did something to ensure there shouldn’t be any further argument about who the best of all time is.

Quarterbacks are judged on wins and losses and against the Jets, Brady won his 187th career regular season game, moving ahead of Peyton Manning and Brett Favre to become the all-time leader in that category.

While the win didn’t happen quite the way he hoped, Brady said after the game that he’s proud of how his team fought back along with how they also were able to close out the game.

“I wish we would have done better, but we won, so (there is) probably a lot to learn from it,” said Brady.  “I wish we could have played a little bit better offensively. We got down early and fought back. We had a good series before the half and hung in there at the end.”

Brady finished the afternoon 20-of-38 for 257 yards along with two touchdowns, but also had a first half interception.  He seemingly struggled as the Jets mixed things up in coverage and seemed to have difficulty deciphering coverages.

It took a while for them to get going, but Brady and the offense managed to put up 14 second quarter points to allow them to knot the score at 14-14 at the half.  However, in the second half, Brady missed just five passes, opening the second half with a 6-of-8 performance for 103 yards and a touchdown in the third quarter and never looked back, with the Patriots adding a field goal by Stephen Gostkowski early in the fourth quarter to put the game out of reach, allowing New England to complete a 24-3 run after the Jets took a 14-0 first half lead.

Bill Belichick told reporters after the game that while he was happy for his quarterback, the goal every week is to win football games.

Now his team is 4-2 on the season, with a Sunday night battle against the Falcons up next weekend at Gillette Stadium.