5 years ago at 5:30 am ET
Follow @SteveB7SFG
Posted Under: Patriots Commentary

The Patriots put together a great celebration for the fans to drop the fifth Super Bowl banner on Thursday night. And the place was rocking. The team and Robert Kraft went all out to put together quite the event. The Chiefs and Andy Reid threw some cold water on the game that followed, but they played well and deserved to win.

And of course, there are lots of “the sky is falling” folks all over social media in the aftermath of the loss to the Chiefs. Amazing how so many people can predict 19-0 one week and then openly question the team the next. To quote Aaron Rodgers R-E-L-A-X folks. This isn’t Bill Belichick’s first rodeo. They have some work to do, but he and the staff are going to get things figured out. Speaking of which…

Belichick Doesn’t Care About Past Years or “What Happened When”:
Immediately after the loss, social media was full of, “the last time the Patriots lost the opener” and the “last time the Chiefs blew out the Patriots” and the like. So when his conference call on Friday rolled around, naturally Bill Belichick was going to be asked about these same happenings. And his answer was typically Belichick. 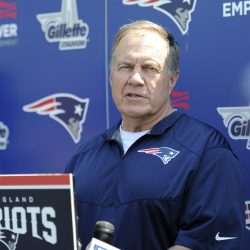 “I think I said it a thousand times. I think we’ve got a lot of work to do,” Belichick said. “I don’t think anything that we did really was good enough. I’m not really interested in living in the past in 2014, 2015, 2003, 2004, which constantly keeps coming up. I mean, everything’s about some other year but this year and this team. I don’t really think all that’s relevant because we’re talking about another team, but we’ve got a thousand questions about it every week. So, I’m really concerned about the 2017 team, what this team is, what this team needs to do. I’m not trying to live in the past like everybody else is.” Bingo…we’ve got Bingo here!

Patriots Lose and the Dolts Come Out in Force:
The sky is falling crowd certainly weren’t limited to the fans. The Patriots and Brady haters fell all over themselves to once again proclaim “this is the beginning of the end” for Brady. Please… We’ve been hearing this drivel since 2008 when Brady tore his ACL against the Chiefs in Foxboro and for the life of me I can’t understand why so many people flock to these inane, ridiculous “hot take” shows so that another clueless presenter can rub his hands and say…” aha! Told you so”

Among the absolute worst is Rob Parker. How he has a job is a testament to how much the prepubescent crowd is jonesing for sports hot takes. This is the guy who fell all over himself stating in 2012, that Tom Brady will never sniff another Super Bowl. And after that, and two Super Bowl wins, including the biggest comeback win ever, does soften his take? No, he doubles down on his own lameness.  His latest idiocy was sent to me by a friend who read this elsewhere. Have a look: 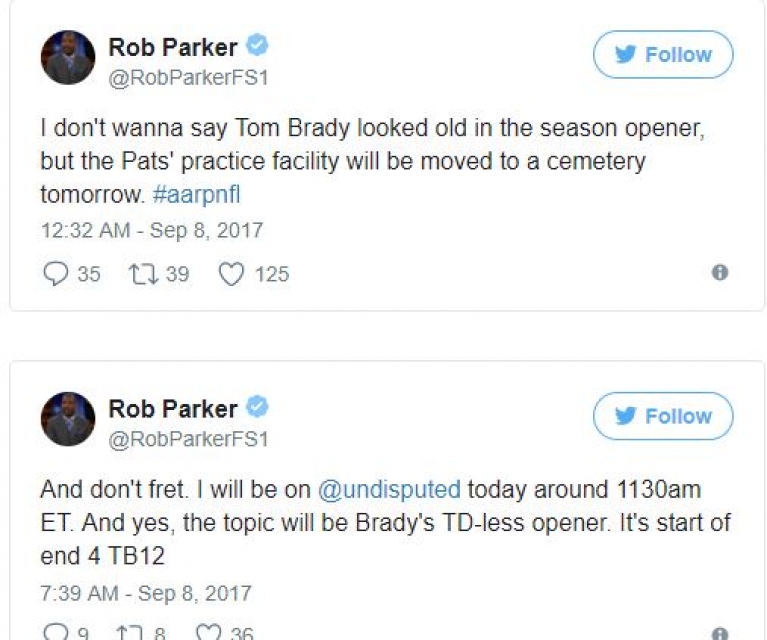 Keep at it though…because if you say it long enough, eventually (5 years and counting) it will come true and you take a victory lap.

Dion Lewis Drawing Trade Interest via Boston Herald:
Jeff Howe, Patriots beat writer for the Boston Herald mentioned on Saturday morning that the Patriots are getting a lot of feelers from other teams about Dion Lewis. With a dearth of returners on the team at the present moment, the Patriots will probably not be willing to part with Lewis.

But with  Mike Gillislee, Rex Burkhead and James White on the active roster and D.J. Foster on the practice squad, if the compensation was good enough, would the team think twice about it? The feeling here says yes. But what would the Patriots and more importantly another team think is appropriate compensation.

Van Noy Gets Two-Year Extension:
Despite the bad game played by the team on Thursday night, the good news that came out of the aftermath is that the Patriots have agreed to a two-year extension with Linebacker Kyle Van Noy. He was scheduled to be an unrestricted free agent in 2018. 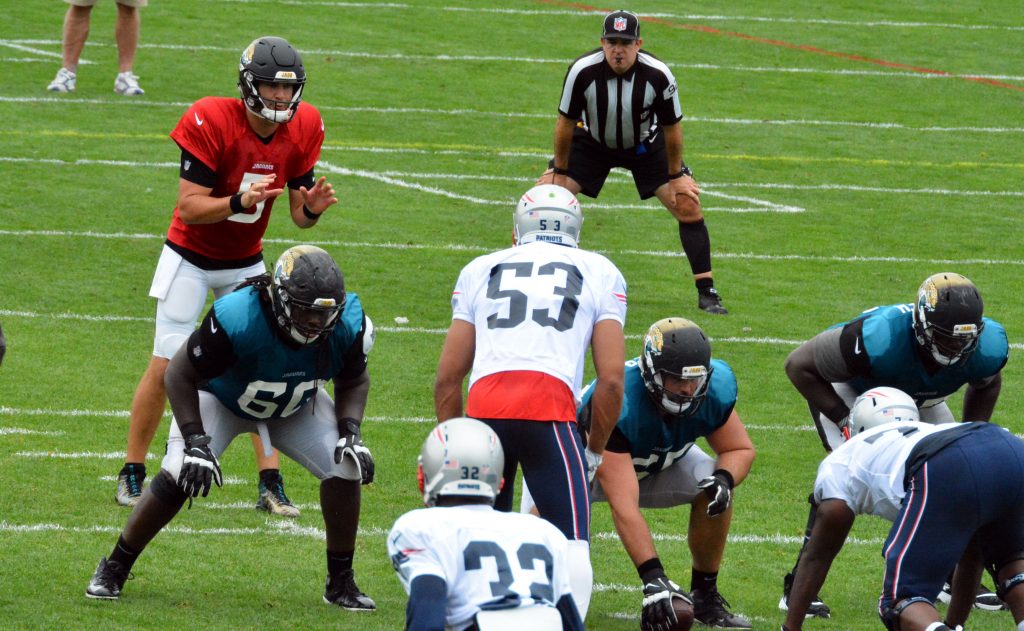 Kyle Van Noy lines up against the Jaguars in joint practice. (SBalestrieri photo)

Van Noy was a former 2nd round pick of the Detroit Lions who was acquired along with a 7th round draft pick for a 6th rounder last year. He was a key role player in the Super Bowl run a year ago and played in all 69 defensive snaps Thursday night.

Van Noy was asked about he has fit in well in New England and said he’s happy here. “Everything,” he said. The atmosphere. The team. The coaches. I just fit pretty well with it. I’m happy to be a Patriot.”

Patriots Workout A Number of Quarterbacks:
The Patriots worked out a number of players this week including four quarterbacks. Among them were Thad Lewis, Matt McGloin, Matt Barkley and David Fales.

And, this being New England, the rumor mill began after many, trying to read the tea leaves, thought that the team was putting Jimmy Garoppolo on the trade market. I wouldn’t put much stock in that theory. However, one player who could be in line for a reunion with the Patriots would be a player they also worked out, LB Akeem Ayers.

Ayers was brought in for the Super Bowl run in 2014 and like Van Noy was a valuable role player playing in nearly 50 percent of the defensive snaps as an off the line linebacker who could occasionally rush the passer. If he can still move, he’d be an intriguing option to bring in, given his knowledge of the system and their need, based on the latest injury to Dont’a Hightower.

Bad Timing By NFL Mexico Prompts Apology: NFL Mexico is extremely popular with our neighbors south of the border. So when the Chiefs won the game on Thursday night, the twitter account of NFL Mexico was looking for an appropriate response to the Chiefs’ shocking upset. They tweeted in Spanish, “When Mexico City shakes with an #earthquake because it can’t believe the @Chiefs won the #Kickoff2017 game.”

Unfortunately, about 30 minutes later Mexico was rocked by their most severe earthquake in 50 years. Measuring 8.1 on the Richter Scale, the earthquake has thus far resulted in 61 deaths and over 200 people being injured. The NFL then deleted the tweet and apologized to the fans. Bad timing with the original tweet but good move on the league’s part of addressing it quickly.

Who Do You Like This Week? NFL Schedule Week 1:

After missing on the Patriots – Chiefs game on Thursday night 0-1, here’s the rest of the schedule for Week 1 in the NFL.

Bills Gear Up For Opener Against the Jets:

The Buffalo Bills have a new regime at the helm and are wanting to get off on the right foot. Coach Sean McDermott has hinted that the team is going to lean heavily on RB LeSean McCoy, which they’ve done the past few seasons, however, with the passing game secondary to the running game.

But the team wants to get off on the right foot and at least for one week, with a win on Sunday against the Jets, the team most likely to finish the season with the worst record in the NFL, the Bills would have first place all to themselves.

The Bills have scored a rushing touchdown in 12 straight games and will lean on it again, their percentage of receiving yards with current members of the team from a year ago is just 35, third lowest in the NFL. And nearly 80 percent of that comes from two players, the aforementioned McCoy and Charles Clay.

The Dolphins game against the Buccaneers was postponed due to Hurricane Irma as it threatens to bring a lot of damage (as this is written on Friday night), to the Miami area. Now the Dolphins must play a 16-week season with no bye week and have flown out to Los Angeles to spend extra time practicing, getting ready for the Chargers in Week 2.

Aside from the logistical standpoint of making last minute arrangements for staying and practicing out there, it has to be very tough on the players and coaches from a personal standpoint. They’re leaving behind, their families and friends and while they have work to do, their minds have to be…at least partly on the folks back home. It brings in the human element that we don’t talk much about much.But these guys are people first and NFL players second.

Ealy and the Jets Want to Show that they got it Right (Maybe):

The Patriots waived Kony Ealy this summer after trading for him this spring. After experimenting with him in a way that was unfamiliar to the former Panther, he was deemed to not fit with the style they want to play and was released.

Now both the Jets and Ealy would love to prove the Patriots wrong and the fact that the Jets got one right. However, in trying to spin this one ESPN’s Len Robbins got his facts a little skewed in what he wrote the Patriots gave up for Ealy.

The Jets recently signed Ealy after he was waived by the Pats. It cost Gang Green nothing.New England, by comparison, paid a significant price to acquire Ealy. The Patriots sent a 2017 second-round draft pick and a third-round pick to the Carolina Panthers for the former Super Bowl 50 standout.

That is incorrect. New England gave up its 2nd round pick for Ealy and Carolina’s 3rd round pick, which meant they essentially moved back only 8 spots in the draft  They did NOT give up a 2nd and a 3rd round pick. And Robbins take that Ealy was seething to prove New England wrong wasn’t evident in Ealy’s words.

“What I can do for this defense is be disruptive and give them my experience of being in the playoffs and in the Super Bowl,” Ealy said. “It’s not just a one-man show, obviously, but we’re going to work together. “We’ve got a great group of talented guys on this defense, and we’re going to turn some heads.”

Perhaps someone is just trying to stir up more stuff in the Jets-Patriots border war.