5 years ago at 10:58 am ET
Follow @IanLogue
Posted Under: NFL Commentary 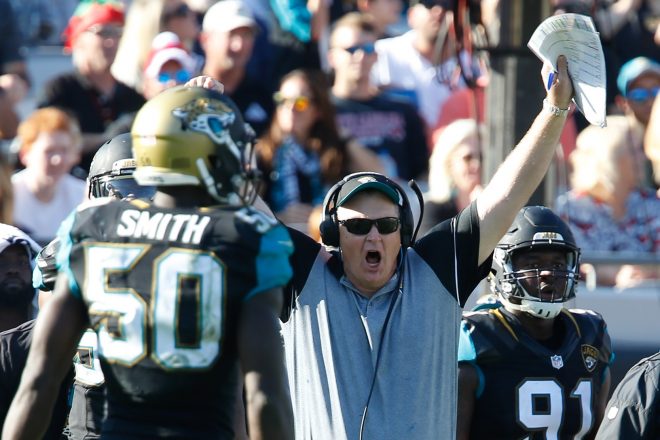 For a team that’s trying to get over the hump of being among the NFL’s bottom-feeders, spending three days working with the Patriots had to be one of the more beneficial periods for a club that’s trying to become a contender again in the AFC South.

Having fired former head coach Gus Bradley, who many Jaguars fans seemed to believe was squandering a tremendous amount of talent before owner Shahid Khan finally made the right move by letting him go, new head coach Doug Marrone has taken a different approach.  Bradley was notorious when it came to his proverbial mention of the team always “getting better”, which was fine in the beginning but by the end of his tenure was just frustrating to hear.  He talked about building a team that was learning how to win, but instead it built a culture of excuses that lasted far longer than it should have.  For those who recall the early years of Pete Carroll here in New England, Bradley’s press conferences had a similar tone and you could almost see his eventual demise coming based on the experience here.

But Marrone has been the complete opposite of Bradley.  He’s showed no hesitation as it comes to reprimanding players when they need it, including quarterback Blake Bortles.  Marrone has been heard repeatedly this preseason verbally lashing Bortles for holding the ball too long (“We can’t take sacks!!!” – was recently heard being screamed by Marrone toward Bortles in a practice prior to their trip to New England) as well as in some of his decision-making.

More importantly, Marrone seems to know that there’s a tremendous amount of talent that has simply underachieved, and seeing how New England operates this week should have been an eye-opening experience that will help Jacksonville moving forward.

“For us, the work was outstanding,” Marrone told the media on Wednesday following their walkthrough via Jaguars.com.

“I think we found out a couple of things; I think the main point of inconsistency, the up and down,” Marrone said. “I think when you’re a team that hasn’t won a lot of football games you’re going to see that and you’re going to strive for that consistency.

“Really, at the end of the day, the teams that win are very consistent in their approach in all three phases and their execution.”

The Jaguars secondary took their lumps this week after Brandin Cooks, Rob Gronkowski and Chris Hogan each made big plays against Jacksonville’s defense.  They got an extensive look at what an experienced veteran quarterback looks like and came away impressed, with safety Tashaun Gipson saying Brady doesn’t resemble a player who just turned 40.

“Just going against a guy like that – he just turned 40 and you wouldn’t be able to tell,” Gipson said via Jacksonville.com. “He’s looking as sharp as ever.”

Working against what may arguably be one of the better secondaries in the NFL was a solid test for Bortles as well as the rest of Jacksonville’s offense.  Marrone admitted that having an opportunity for his players to work against a quality opponent is certainly helpful, especially since it’s a better barometer for where they’re at versus having success against their own defense.

“We’re seeing a lot of different schemes, different coverages – things we don’t get every day in practice,” Marrone said. “We would have to ‘card’ those up and have our own players run those plays for us. When that happens, you kind of get in my opinion a false sense of security.

“When you go out here and it’s full speed, that’s something you can put in the catalogue and teach from – and that’s going to help you down the road.”

It’s been a productive three days and now they’ll go against each other one final time tonight when the two teams meet in the first exhibition game for both clubs at Gillette Stadium.

How Was This Article?
Posted Under: NFL Commentary