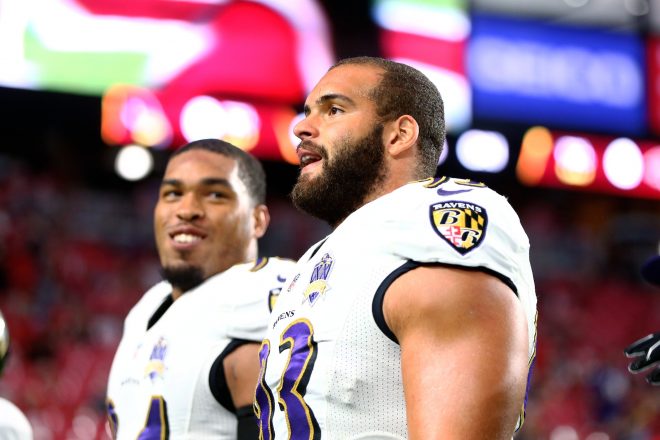 Guy Willing to Do it All – One of the more notable signings of the offseason hasn’t gotten much press but the addition of Lawrence Guy appears like it could be one that might end up being one of the more important additions for the Patriots in 2017.

Guy, who the Patriots signed to a 4-year deal that could be worth as much as $20 million deal back in March, was an important piece for a Baltimore defense that saw him head off to one of their biggest AFC Rivals.  The 26-year old was a key component for the Ravens, who established a role for himself after Baltimore acquired him off of waivers back in 2014 and he evolved into a strong player in the middle of their defense.

He’s got plenty of versatility, having the ability to play multiple spots and he’s also had success on special teams, which as most fans know, is something Bill Belichick appreciates.  Guy was named Special Teams Player of the Week in September of 2016 after his performance during the club’s second-largest comeback in team history when he blocked an extra point that the Ravens recovered and returned for 2-points.  The play got the Ravens on the board and sparked Baltimore overcoming a 20-0 deficit to eventually defeat Cleveland 25-20.

He’s no stranger to hard work or trying new things and he’s not afraid to play whatever position he’s asked, although he joked that he might not be a great fit in the secondary.

“I said, ‘I feel comfortable anywhere you put me at.’ It’s one of those situations with me as a player that I … found that I needed to play different positions for me to be the best player I can be,” Guy said Wednesday via NESN.com. “Coming in this situation, wherever they need to put me at, I can go ahead and do it. I’m not a great corner. I’m a little bit heavy, but I’ll try it.”

One of the best things about Guy seems to be the fact that he’s aware that doing multiple things makes a player more valuable, which is something Belichick has emphasized over the years. Given that New England’s schemes sometimes change completely from week to week, having a player that can adapt is clearly important.   That makes someone like Guy a good fit, and he’s happy to do whatever the team needs him to in order to make sure he can contribute as much as he can.

“I like to be on the field, so if they put me at a position they need me to work at, I’ll go out there and do it,” said Guy. “The whole object is to be able to play multi positions on the field so you can be out there for the most time you can and how you help the team out. If you can only do one thing, you’re not really helping the team. If you can do multiple things, you can help the team a lot.”

White’s Attitude Hasn’t Changed – James White finished the 2016 Championship season in unique fashion, having been the player fighting his way into the end zone for the game-winning touchdown, capping off a solid year for that ultimately lead to his being rewarded this offseason with a contract extension.

White spent time last season splitting snaps with LeGarrette Blount, seeing most of his time on third down where he finished with the second-most receptions on the team behind Julian Edelman, catching 18 passes on third down with 9 first downs.

Those are the moments that White works for and after slowly coming into his own, he’s maintained the same attitude.

“You never know who’s going to be the guy to have the big game or who’s going to get the most plays. So you’ve got to stay ready, so you don’t have to get ready. So that’s pretty much what my process was, to be ready for when my number’s called.”

White joins a crowded backfield this preseason that features incumbents Dion Lewis and D.J. Foster, along with newcomers Rex Burkhead and Mike Gillislee competing for playing time.  Like the receiver spot, we’ll likely see an interesting development at some point with a surprise cut reflecting a difficult decision from Belichick due to his belief in whichever player survives.

For White, he’s thankful for every moment he’s experienced so far and just as he always has, he’s looking forward to making the most of the upcoming season.

“I’ve been blessed to have an opportunity,” White said. “I’ve just tried to make the most of it, and I just want to try to continue to get better, continue working hard and continue to stay humble.”

For White, that game-winning touchdown is in the past.  He’s simply on to 2017.

White & Lewis Among the Toughest to Tackle – One of the most impressive traits about Dion Lewis and James White is how dynamic the two players are with the football in their hands, and ProFootballFocus released a graphic emphasizing just how good the two are.

Lewis and White ranked 4th and 5th in the NFL among running backs who forced missed tackles after catching the ball out of the backfield, trailing only Arizona’s David A. Johnson, Cleveland’s Duke Johnson and Detroit’s Theo Riddick.

Over the last two seasons, @Patriots RBs Dion Lewis and James White have been among the best at forcing missed tackles in the passing game. pic.twitter.com/8C47y4sMsx

While many are familiar with how athletic Lewis is, White’s shiftiness was on display many times throughout last season as he quickly became a dangerous asset in New England’s passing game.

The numbers don’t lie, and it’s no secret the Patriots have plenty of talent at the position and a limited around of room, leaving New England with a good problem to have heading into training camp. 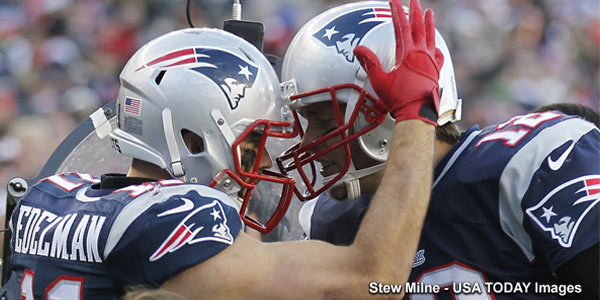 Brady and Edelman are nominated for honors at the 2017 Kids Choice Awards.

Brady, Edelman Among Players Up For Nickelodeon’s Kids Choice Awards – It shouldn’t be a surprise that plenty of kids love Tom Brady and the Patriots, and Brady finds himself among some of the world’s most popular players up for an award at the upcoming Kid’s Choice Awards.

Joining Brady as a fellow teammate up for an award is Julian Edelman, who is up for the “Hands of Gold” award.  His catch in the Super Bowl will likely be on display as he tries to win out against the likes of Adrián Beltré (MLB), Braden Holtby (NHL) Antonio Brown (NFL), Ian Kinsler (MLB) and, of course, Odell Beckham Jr. (NFL).

No word yet on whether or not the two will be on hand, although given that it’s an award show for kids, it would certainly be fun to see the two make an appearance in the event either one earns an award.

Fans can now vote via the Nick App and the event is set to be recorded live on Thursday, July 13th from UCLA’s Pauley Pavilion in Los Angeles.