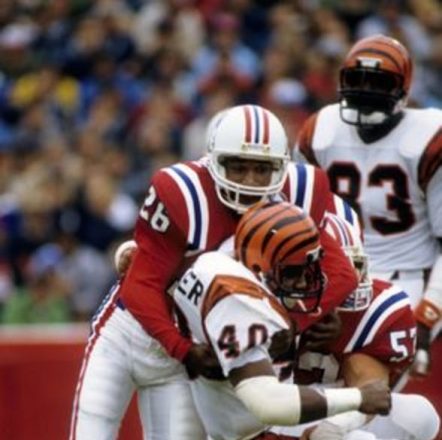 The New England Patriots formally announced on Monday that cornerback Raymond Clayborn had been selected as the 26th member of the teams Hall of Fame following a vote by the fans.

Per the Patriots press release;

“Clayborn was a three-time Pro Bowl player (1983, 1985, 1986) during his 13-year Patriots career that extended from 1977 through 1989. He was drafted by the Patriots in the first round (16th overall) out of Texas in 1977 and quickly established himself as one of the game’s best cornerbacks, as well as a superb kickoff returner. He set a franchise record with 36 career interceptions, a record which Ty Law tied in 2004 and remains today, 28 years after Clayborn finished his Patriots career. His 555 interception return yards rank second in franchise history to Law’s 583 return yards. Clayborn also returned 57 kickoffs for 1,538 yards and three touchdowns. As a rookie in 1977, he returned 28 kickoffs for 869 yards and led the NFL with a 31.0-yard return average and returned three kicks for touchdowns, both of which remain franchise records. He is one of just 20 NFL players since the 1970 merger to finish a season with a better than 30.0-yard average on kickoff returns (min. 20 returns) and is the only Patriots player to accomplish the feat.”

“I was fortunate to be a season ticket holder during Raymond’s entire Patriots career,” said Patriots Chairman and CEO Robert Kraft. “For the first half of his career, he teamed with Michael Haynes to form one of the best corner tandems in league history. Throughout his career, Raymond was a physical, shutdown corner. One of my favorite memories was watching the 1985 team advance to the Super Bowl after Raymond helped us break the Orange Bowl curse when he stymied future Hall of Fame quarterback Dan Marino with a dominant performance against Pro Bowl receivers Mark Duper and Mark Clayton. Raymond had six passes defensed and an interception to help us claim our first conference title. It was the greatest upset victory in franchise history at the time and one the entire New England region celebrated. It is a well-deserved honor and I look forward to presenting him his hall of fame jacket.”

The Patriots will honor Clayborn in a special ceremony at The Hall at Patriot Place on a date to be determined around the time training camp opens.

By: Russ Goldman
In this episode, we look back at the loss to the Vikings on Thanksgiving, and later on, we preview the upcoming game against the Bills.
1 hour ago

By: Robert Alvarez
Linebacker Jahlani Tavai agrees to a two-year contract extension with the Patriots.
19 hours ago

By: Robert Alvarez
Devin McCourty will appear in his 200th career NFL game on Thursday night against the Buffalo Bills, Robert Kraft honors his milestone.
21 hours ago

By: Robert Alvarez
Robert Kraft lends the Patriots team plane to the University of Virginia so its players can attend the funerals of fallen teammates.
21 hours ago

By: Robert Alvarez
Sideline mic'd up sights and sounds during the New England Patriots' Week 12, thanksgiving matchup with the Minnesota Vikings.
22 hours ago