With the month of February about to come to an end, things are about to get interesting with one of New England’s key free agents heading into tomorrow’s 4pm deadline where teams will have to decide whether or not to use their franchise or transition tag.

As free agency approaches, Dont’a Hightower is one of the key players on New England’s roster set to hit the market as he looks cash in after a strong start to his Patriots career.  Despite injuries that have caused him to miss time over the past few seasons, the veteran linebacker has come up big when it’s mattered most, having made key plays against both Seattle and Atlanta during the team’s two recent championship runs.

That will obviously lead to quite a pay increase, with the likely question being whether or not the team will use the franchise tag or the transition tag as they look to extend one of their most important defensive players.  If the Patriots were to franchise Hightower, the move would guarantee his services for the 2017 season at somewhere between $14 million – $15 million while keeping other clubs away from their player.  However, using the transition tag, as Mike Reiss of ESPN recently suggested, would earn Hightower a reported $11 million and would allow the Patriots the opportunity to match any potential deal he may be offered by another team.

Reiss believes the transition tag makes more sense as it would be “a more affordable fallback option” while the club tries to work out a long-term deal to keep Hightower in New England.

The next question will be the current state of the discussions between the two sides, and whether or not Hightower would ultimately like to remain here.  He’s earned the respect of every player in the locker room and he’s become one of the most reliable defensive players for the coaching staff, with the veteran responsible for making the calls on defense as well as shouldering a big leadership role.

But Hightower holds a significant advantage here as the Patriots essentially put all their eggs in his basket after trading away Chandler Jones and Jamie Collins, with the team clearly believing keeping Hightower was the more important priority since there’s simply not enough money cap-wise to pay all three.  Given how things have played out, Hightower has proven them correct and if he walks, they really don’t have a viable replacement right now, which is a problem. Losing someone like him would be difficult, especially given his postseason contributions since players like Hightower are certainly hard to come by. 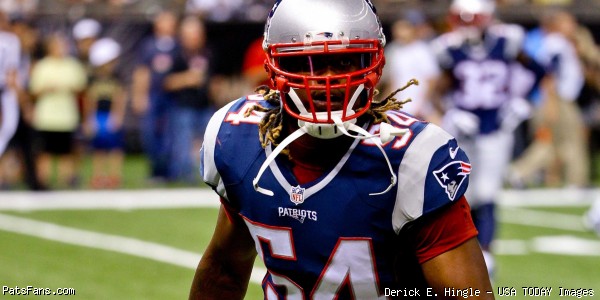 
In terms of trying to figure out how things might play out, Devin McCourty’s situation comes to mind.  The Patriots opted against franchising the veteran safety and allowed him to test the market, which fortunately worked out after he entertained multiple offers before ultimately signing a long-term deal and staying in New England.  The big key to that process was likely the fact the negotiations seemed to remain relatively positive between the two sides throughout the time McCourty was fielding offers, which is one of the most important aspects for a player being wooed by other clubs.

The last defensive player who was franchised was Vincent Wilfork back in 2010 before eventually agreeing on a 5-year extension worth $40-million, but those negotiations leading up to when he was initially tagged weren’t exactly the best.

In late January that year Wilfork appeared on WEEI and one thing he talked about was the fact he honored his six-year rookie deal and he expected to be rewarded for everything he had done and didn’t feel the $7-million he would have received for the franchise tag that year was enough.

“I did honor my six-year deal. Now, that six-year deal is up. It’s time for me to move forward, with the Patriots or not with the Patriots,” Wilfork told WEEI via ESPN. “[The franchise tag] is decent money for most people out there. What I do, it’s OK.  But I don’t look at myself as an okay player.  Like I said, it’s just basically a slap in my face, and an insult to me, to tell me I’m an OK player.”

Heading into the deadline, Wilfork later admitted that it left him wondering how things would turn out before realizing how important he was to his team.

“When the time presented itself, especially with the tag – when it came to me – it was probably five minutes before we got on the phone and started talking,” said Wilfork about how things played out after he signed his franchise tender back in 2010.  “I think within those five minutes it was like, ‘OK, are they going to trade me or what’s going to happen now?’ Once we talked and found out the tag was getting put on because we were trying to reach a long-term deal I was very positive a deal was going to get done.”

That process ultimately worked out for Wilfork, but how things will play out with Hightower remains to be seen.  If his first choice is New England but he’s looking to find out what his true value is on the open market before making a decision, it’s certainly his prerogative to do so.  In the end, whether or not he wants to remain in New England will be up to him, but it looks like the Patriots will have their work cut out for themselves after Ian Rapoport recently reported that Hightower already turned down a deal that would have paid him a reported average of $10 million per season prior to the start of the 2016 campaign.

Now the only question will be how much it will cost to get this done.  Should they let him hit the market, it will be interesting to see exactly who might emerge as a contender for his services and whether or not his price tag might ultimately end up being too rich for New England, even despite his significant value to the team.

For now, we’ll have to see what happens tomorrow before we know whether or not Hightower will even get that opportunity.