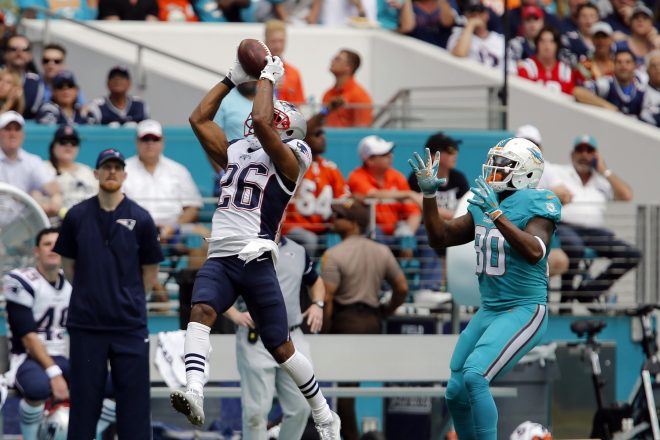 We’ll be doing profiles on each of the free agents in the upcoming days and give you our take on whether they return or move on. One of the starters and a very important piece is cornerback Logan Ryan.

The Patriots picked up Ryan with the 83rd pick in the 3rd Round of the 2013 NFL Draft. The Rutgers alum stepped in and played well as a rookie appearing in all 16 games and logging seven starts. With the additions of Darrelle Revis and Brandon Browner in 2014, his playing time and confidence was curtailed somewhat.

With the previous two’s departure after Super Bowl XLIX, Ryan again was elevated to a starting role and played well in 2015. He’s had bouts of inconsistency, and the beginning of 2016 was no exception. He was surpassed early in the campaign by Eric Rowe before really turning around his play down the stretch and into the playoffs. He played the best football of his career in the second half of 2016 and at 26, there’s no reason to think he couldn’t get even better.

Ryan is a sure tackler and is outstanding in run support. He’s 5’11, 195-pounds and is often tasked with covering an opponent’s top WR with over the top safety help. He specializes in man coverage and plays WRs tight to the line and is a physical, sticky corner when he is on top of his game.

Why Ryan Will Return: The Patriots have a ton of cap space and could easily pay Ryan the cash that would be needed to keep him in a Patriots uniform. He’s durable and has been active for every game in his four-year career since entering the NFL.

Bill Belichick loves versatile, durable players and Ryan fits the bill on both. He can play outside, locked up on an opponent’s top WR or slide inside in the slot. He’s not the biggest guy but isn’t afraid to stick his nose into the mix in the running game.

He’s among the surest tacklers on the team and rarely does a receiver or a runner gets many yards after contact with Ryan. He’s a trusted, veteran member of the defense who knows the calls down pat and is never out of position. He’s a very good playmaker with the ball in the air with six interceptions and 25 passes defensed in the last two seasons, along with a forced fumble and 131 tackles.

Why Ryan Won’t Return: There are always teams looking for trusted, veteran corner that can play man coverage and always be in position. And his versatility with the ability to play inside or outside is a bonus.

With many teams needing such a player, they’ll likely throw much more money than the Patriots can afford. While the Pats do have plenty of cap space, with Malcolm Butler and Dont’a Hightower already needing new deals and with others on the defense also up for renegotiation, Butler may be the odd man out.

Bottom Line: It will be interesting to see how much money other teams will throw at Ryan who is a #2 corner. One possible destination will be Jacksonville. The Jaguars desperately need cornerback help and Butler’s versatility and ability would be great fits.

Although the Patriots would love to see Ryan back, he’s probably going to get paid and paid well. He’s young enough to be a very solid contributor for the next several years and a durable, tough corner is always in demand.

I see another team giving Ryan a nice big contract and the Patriots waving goodbye. The chances of Ryan returning are probably less than 30 percent. He’s earned his payday and will take advantage.