5 years ago at 6:40 am ET
Follow @SteveB7SFG
Posted Under: Uncategorized 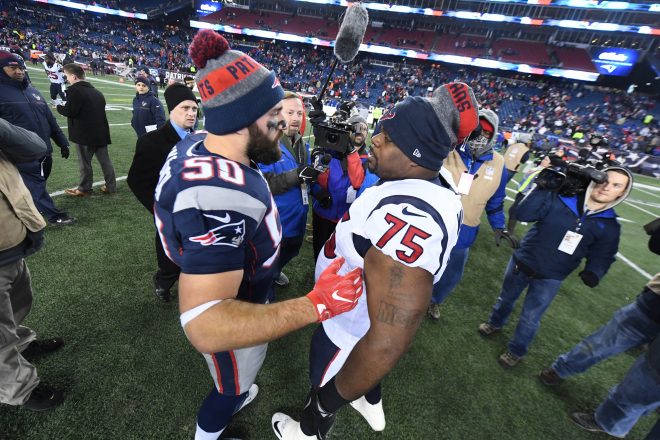 With the win this evening, the Patriots return to the AFC Championship Game for the sixth straight season which is an NFL record. They break the record they shared with the Oakland Raiders who were in the 1973-77 title games.

It is telling of how deep this team is and the resilience that they have when they play poorly which they did for long stretches of tonight’s game and still walk away with not only a victory but cover a ridiculously high 16.5 point spread.

The Patriots with the win are just two wins away from title number 5.

Dion Lewis set a Patriots and NFL record during tonight’s game with a rushing, receiving and return for a touchdown, the first time it has been done in postseason history. Lewis’ 98-yard kickoff return also marked the first kick return for a touchdown in the Patriots postseason history. But something tells me, he’ll focus more on the two balls he put on the ground this week.

Julian Edelman also set a Patriots record tonight. With his 8 catches for 137 yards he moves into first place for receptions in Patriots postseason history, moving past Wes Welker. Edelman is now tied with Thurman Thomas with 76 catches in the NFL playoffs. With possibly two games remaining on the slate this season, he could jump pretty high on the leader board.  Andre Reed (85), Michael Irvin (87) and Welker (88), Reggie Wayne (92) are the next players ahead. Jerry Rice with 151 postseason receptions remains far ahead of everyone else.

Congrats to Logan Ryan who played arguably his best game in a Patriots uniform tonight. Ryan has had ebbs and flows in his career in Foxboro and this will certainly go down as big night. He covered WR DeAndre Hopkins tightly all night long and turned in an interception with a return to the Houston five-yard line that set up the Patriots final touchdown of the game. He’s going to get paid, if not here, somewhere.

Goodbye, Big Vince?
By all indications, it looks like Vince Wilfork played his last NFL game tonight on the cold field of Gillette Stadium. Reports are that he’s contemplating retirement. If true, this game wouldn’t be the way he’d want to go out, but it is poetic justice his career ends on the field where he played such a meaningful role for many years.

Wilfork always carried him with class and dignity and he and his wife’s actions off the field and in the community, were of the highest order. Happy Trails #75.

Fake “News Reporting” Click Bait, Returns to the Election and Foxboro:
A fluff piece with no teeth or actual news reporting, despite being touted as such on SB Nation tried to paint the Patriots as losing their fan base because of their ties to Donald Trump. Raise your hand if this particular angle has been beaten to death already.

The female author of the piece got what she wanted and got her 15 minutes, but then cried gender bias when the backlash on social media called her out. And anyone who has ever been on Twitter knows that the daggers of the quicksand that it can be knows no one certain bias. The piece tried to claim that the Pats are losing their fan base support because Bill Belichick and Tom Brady supported President-elect Donald Trump in the November Presidential election.

Using six people as a barometer from a neighborhood in Lincoln? We’ve yet to hear of fans turning in their season tickets because the waiting list continues to grow. And the ratings for the Patriots games continues to lead the networks whenever they play. Do fans really care who a player or coach supports in an election? No, they care about wins and titles.

Anything that seeks to get that 15 minutes, and this clickbait piece certainly did, only need mention the Patriots and it is sure to get plenty of play. Woody Johnson, owner of the New York Jets also reportedly supported Trump and contributed to his campaign, and yet we’ve heard nary a peep of his fanbase backlash.

Patriots Prominent on Social Media This Week:
Between the pics of Bill Belichick napping on the ferry to Martha’s Vineyard and the subsequent flap over whether to allow ESPN the use of that from the fan that took it, to others, the Pats were all over social media this week.

Adam Markopoulos’ picture captured Belichick and his girlfriend Linda Holliday on the ferry to the Vineyard. Bill had his laptop out to work but after Holliday curled up in his lap and fell asleep, Bill nodded off himself. Which is not particularly noteworthy. We’ve all been there. But the popular perception of Belichick as Emperor Palpatine overseeing the Death Star and never sleeping makes it a coup. 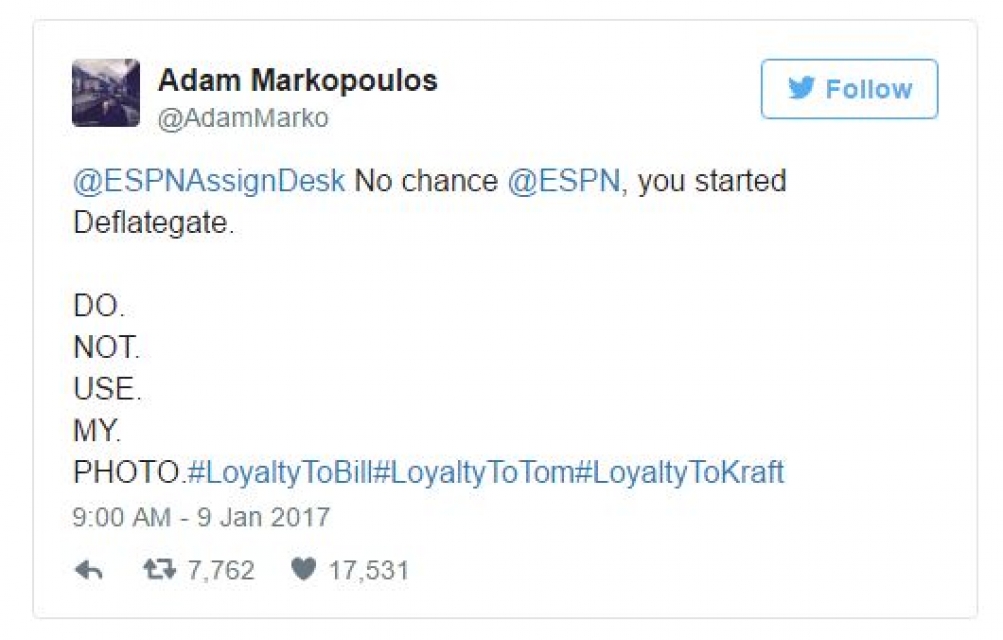 We sometimes forget that these players and coaches are human and Markopoulos’ pic naturally went viral. ESPN asked to use the picture and that’s when the story got interesting. Markopoulos turned them down, as is his right but the way he did it struck a nerve with New England fans.

Rob Gronkowski and Danny Amendola posted greetings and encouragement to sick children, which is always worthy of note and popular with NFL fans. But the back and forth between Tom Brady and Dwayne Johnson aka “The Rock” was a great one. The two are friends and both represent Under Armor. Brady’s new sleepwear is on sale and his imitation of Johnson while sending him a set was good. But Johnson’s retort was even better.

Who Do You Like Today:
After last week’s Wild Card Weekend where I went 3-1, the Divisional Playoffs are usually the best games of the postseason. So far, I’m 2-0 in the playoffs this week, having taken Atlanta and the Patriots.

But two intriguing games await today, with Cowboys and Packers, followed by KC and Pittsburgh. I’m sticking with my picks from Friday and going with Dallas and KC moving on.

Bills Hire McDermott As New Head Coach:
The Buffalo Bills have found their new head coach in the person of Sean McDermott the former Defensive Coordinator of the Carolina Panthers.

McDermott, 42, becomes the 20th coach in Bills history and the third coach in just the past four seasons. He becomes a head coach for the first time and has built an impressive resume along the way.

Speaking with the Buffalo media for the first time, he thanked his former coaches and added, “I’ve been a part of building a defense, brick by brick, step by step,” McDermott said. “Within that, I have gone to two Super Bowls. I know what that smells like, feels like, tastes like. I feel confident in my ability to move this franchise forward.”

While he will report directly to the owners, Terry and Kim Pegula, GM Doug Whaley will retain control over the roster, although McDermott stated it will be a collaborative effort. He didn’t mention what the feeling was on current QB Tyrod Taylor and whether the Bills would pick up his option this spring.

Dolphins Promote Burke to Defensive Coordinator:
The Miami Dolphins moved quickly to replace departed DC Vance Joseph who was named as the head coach of the Denver Broncos by hiring from within, Linebackers Coach Matt Burke.

Burke was brought in by the team in 2016 after stops with the Bengals, Lions, and the Titans. Now he faces some serious challenges. Miami’s defense allowed the most yards (6,122) in team history and was 29th in the NFL in that category (382.6 yard per game).

The Fins defense was a woeful 30th against the run allowing over 140 yards per game and 15th against the pass (242 yards pre game) and 18th in scoring defense (23.8 points per game).

Burke plans on keeping the 4-3 system over switching to a 3-4 and said he wants an aggressive, attacking defense. But questions need to be addressed with the defense. Ndamukong Suh and Cameron Wake are the cornerstones of the DL but Miami must decide whether to keep Mario Williams. Jordan Phillips and Earl Mitchell missed significant time to injury.

Linebackers Koa Misi and Jelani Jenkins also suffered injuries as did the secondary with Reshad Jones and Byron Maxwell missing multiple games. Burke will have his work cut out for him in 2017.

Jets to Target Deshaun Watson in the Upcoming Draft?
After a dreadful 5-11 season that seemed ripe for promise the Jets hold the #6 pick in the upcoming 2017 NFL Draft.  What will they do with that pick now holds the biggest question for the team as it enters the dead zone before the draft hype picks up after the Super Bowl?

Right now the Jets have four QBs, Ryan Fitzpatrick, Geno Smith, Bryce Petty and Christian Hackenberg. But really, they may have none. Not one of the above mentioned QBs distinguished himself to be looked upon with anything resembling confidence in the position heading into 2017.

So what does GM Mike Macaggnan do? He may look hard at the National Championship Game from Monday night and try to land Clemson’s Deshaun Watson. Watson led a furious 4th quarter comeback against Alabama to secure the National title.

He’s thrown for 4000 yards and 35 touchdowns in back-to-back seasons and is as comfortable under center, as he is in the shotgun. A dual threat runner and passer, he has good pocket awareness and footwork and could be as close to NFL ready as any other QB coming out of college this spring.