6 years ago at 11:08 am ET
Follow @SteveB7SFG
Posted Under: Patriots Commentary 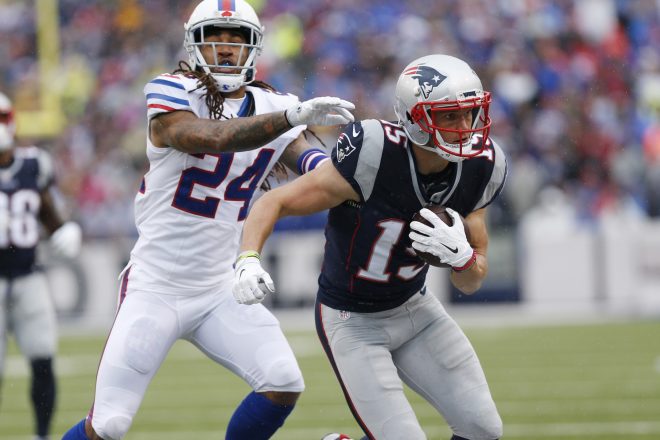 The Return of the Jedi, Puts Bills in Their Place

The Patriots win puts them at 7-1 in with the best record in the AFC as well as comfortably ahead in the AFC East, three games ahead of the Bills. Now they have a nicely scheduled bye week before facing the Seahawks in two weeks in Foxboro.

The Patriots road record now stands at an impressive 4-0. They’ve shown the ability to win in a couple of tough environments and a mentally tough football team. They’re coming together as a group which is always a good sign.

Bill Belichick always says that you never really know what you have with a team until October. That’s when a team’s character starts to show. Well, he has to be pretty pleased with this group overall. They show every sign of being a very tough team to beat from here to the end of the season.

Quarterback: A+
Tom Brady continues his torrid start to the season since missing the first four games. Yesterday he was 22 of 33 for 315 yards and four touchdowns. The Patriots converted on over 69 percent of their third downs with Brady hitting the first five thru the air.

He picked the Bills clean, and although they had good pressure on him for much of the game, he was able to move in the pocket and slide away from pressure while still keeping his eyes downfield.

Brady also got everyone involved in the passing game, connecting to four different receivers for touchdowns. No matter what the Bills tried, he was one step ahead yesterday and the Patriots offense looked nearly unstoppable on Sunday.

Running Backs: C-
LeGarrette Blount didn’t have the best day out in Buffalo on Sunday, gaining only 43 yards on 18 carries but did have his team-leading ninth touchdown. He didn’t have much room to maneuver as the Bills were getting good penetration and were able to disrupt plays at the point of attack.

James White had just two carries for 15 yards and added 14 more yards on two catches out of the backfield. We had White having a much bigger role on Sunday than how things played out. But with the kind of day Brady was having throwing the ball, they didn’t use the screen game much.

Brady even got into the act, scrambling for 15 yards for a big third down conversion. Doing his best Clydesdale impression, he rumbled, ever so slowly for the big gain which no doubt ate at Rex Ryan.

Wide Receivers: A-
Chris Hogan made his first trip back to Buffalo after signing as a free agent with the Patriots this spring and showed what they were missing. Hogan caught 4 passes for 91 yards including a highlight reel 53-yard touchdown pass where he blew by Stephon Gilmore and Brady dropped it perfectly in the bucket. On the season Hogan has four catches for 35+ yards. Patriots deep threat that everyone keeps pining for? Check.

“He’s definitely deceptively fast,” Brady said. “Most guys when you run down the field and look back for the ball, it slows you down. I think Hoags does a great job of continuing to keep his speed while still looking back.Once he’s by them, he’s by them. That’s playing speed and he’s definitely got that. That’s been a huge part of our offense.”

Julian Edelman caught his first touchdown pass of the season, an impressive 12-yard effort where he went all out, stretching out to just reach the end zone. Brady’s closest friend on the team had modest numbers with 4 catches for 37 yards but his value can’t be judged on just numbers. He draws coverage away from others (Gronkowski 53-yard TD) and provides superb blocking downfield. He narrowly missed a 2nd TD when a nice throw from Brady was about 3-4 inches too far and the ball slipped thru his fingers.

Danny Amendola…all he does is make big plays every time he gets his hands on the ball. Stepping into a bit of a bigger role due to the hamstring injury to Malcolm Mitchell, Amendola as usual, made the most of his opportunities. He caught three passes for 29 yards including the opening touchdown of the day….more to him in a bit.

Tight Ends: A
The Patriots tight ends were going to get a lot of attention from the Bills defense on Sunday considering the success that they’ve been having. In the end, it didn’t do them much good. The Patriots two big men combined for 9 catches for 144 yards and a touchdown.

Gronk had five catches for 109 yards and a score including a 53-yarder where he took Nickell Robey-Coleman to school. That gave him the franchise record for touchdowns (69) breaking a tie with Stanley Morgan. Even though the Bills think of him as just a JAG, Gronkowski has been on fire the past four weeks, 21 catches, 463 yards, and three touchdowns.

Martellus Bennett has been hobbled by a bad ankle the past few weeks, it was obvious that was in pain after several plays on Sunday. But he still chipped in with four catches for 35 yards and provides an extremely hard nose in the blocking department.

Offensive Line: B-
The offensive line didn’t have the greatest day. Buffalo’s defensive line won the battle in the trenches in the running game and the Pats’ running backs could find precious little room to run. They could only gain 72 yards on the ground for the day, far below what they’ve been averaging this season.

The pass protection was fair, the Bills did bring a lot of pressure on Brady and he was sacked four times but for the most part, he was able to slide or move in the pocket and find receivers downfield. Buffalo entered the game with 21 sacks, second only to the Broncos, so they are very good at getting after the passer.

Defensive Line: B-
The Patriots defensive line was gashed by the running game of the Bills again, allowing 167 yards on the ground. Mike Gillislee filled in nicely for LeSean McCoy gaining 85 yards on just 12 carries and Taylor scrambled for 48 more including a 26-yard TD on 4th down.

In the second half of the game, they were able to generate some decent pressure on the QB and backup DE Trey Flowers notched two sacks playing as an interior pass rusher. Alan Branch had a nice game of pushing the pocket as well.

Linebackers: B-
Jamie Collins wasn’t his dominant self, something we looked for, especially without McCoy in the lineup. But after the Bills impressive opening drive, they never again had any consistency moving the ball. The communication issues at the end of the half with 12 players, and then 10 falls on both the coaches and the linebackers who call out the defense. We expect those breakdowns from the Bills, not a Bill Belichick/Matt Patricia defense.

Dont’a Hightower and Elandon Roberts played physical and tough at times, but on others were pushed out of the play. Hightower had the hit for the game when he flattened Gillislee on the Bills first drive of the game. Shea McClellin was taken to school by Reggie Bush out of the backfield.

Secondary: B
The secondary had a solid day, Malcolm Butler did a good job of locking up Robert Woods for the most part on the day. Eric Rowe had a rough time with the officials and was really victimized by the refs on a terrible call at the end of the game.

The Bills live off of deep pass plays but they hit no 40+ yard plays on Sunday. With just three of 20+ yards. Taylor completed just 50 percent of his passes and passed for just 183 yards and no touchdowns on the day.

Devin McCourty and Pat Chung were both very solid again. The safety play this season has been a major plus. McCourty laid a huge but clean hit on Brandon Tate just as he caught the ball.

Special Teams: A-
Great bounce back game after a bad one in Pittsburgh. Stephen Gostkowski made a nice effort in this one, making two field goals, one from 51 yards at the end of the first half in the swirling winds of Buffalo. He was a perfect five for five on EPs.

Ryan Allen averaged 44-yards net on his punting and the coverage units did a fantastic job on punt coverage. Danny Amendola took the 2nd half kickoff back 73 yards to set the Patriots up in great shape to blow the game open.

Other than one bizarre play where Colton Schmidt dropped the ball on a Bills punt and then raced for a first down, the STs had a very good, solid day.

Coaches: B
Bill Belichick had the troops ready for this one after the debacle in Foxboro and having to listen to Ryan and the Bills chirp about their win. Josh McDaniels had the offense clicking on all cylinders and they scored 41 points, but almost got too smart for his own good. They ran a trick play reverse pitch to Julian Edelman that was nearly intercepted by the Bills.

Matt Patricia had some issues with his players on the defense. A 12-men on the field penalty was nearly followed by a back-to-back one. Then they were left with just 10 men on the field. That is a coaching tool. Overall the defense didn’t play great but held them to 17 points until a garbage time TD set up with a gift PI call. It wasn’t great but it wasn’t awful either.