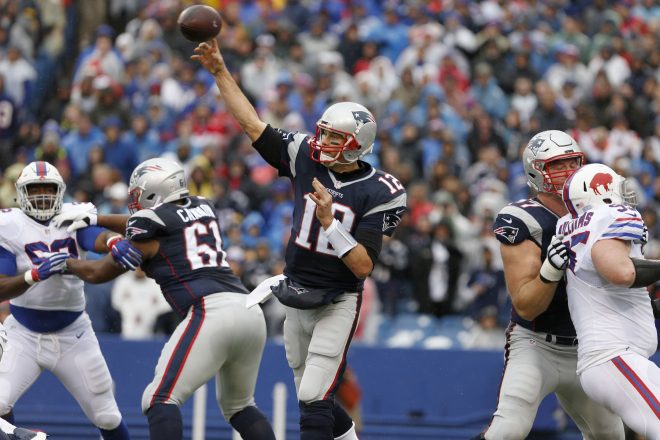 ORCHARD PARK, N.Y. – It’s one thing to shut out the Patriots with an injured third string quarterback at the helm. It’s another to try and do it with the big guys back in the lineup.

Tom Brady and Rob Gronkowski both missed the Week 4 16-0 loss to the Buffalo Bills at Foxborough, the only loss for the Patriots this year. Both men returned for Sunday’s rematch at New Era Stadium, and the Patriots predictably laid a 41-25 smacking on the Bills. The Patriots now lead the AFC East by three games, and head into their bye week in wonderful shape.

Brady threw for 315 yards and four touchdowns. One of them went to Gronkowski, who grew up in nearby Williamsville. The catch was Gronk’s 69th career touchdown, making him the all-time Patriot leader in touchdowns, passing former wide receiver Stanley Morgan. Gronkowski finished with five catches for 109 yards. Buffalo consistently found it too difficult to cover Gronkowski; one of his catches was a nice 18-yard sideline tightrope grab in the third quarter.

His touchdown was another seam pass, similar to the touchdown he caught last week at Pittsburgh. This week’s scoring toss went for 52 yards up the right seam, as Gronk whizzed past Nickell Robey-Coleman that was a complete mismatch.

The final score was closer than the game was, as the Patriots were never seriously threatened all game long. As is the case with Rex Ryan coached teams, the penalty count was high for the Bills, many calls keeping Patriot drives alive. Tyrod Taylor could not sustain a good passing game, misfiring on many throws and negating his ability to avoid sacks and run with the ball. The Bills had a good running attack all game long, but the lack of a passing game prevented the Bills from a possible second win over the Patriots this season.

Buffalo was flagged 12 times for 84 yards for the game. Interestingly, the Patriots were flagged for ten penalties, but for more yardage (116) than Buffalo. Two of those penalties were pass interference calls on Eric Rowe (29 yards) and Justin Coleman (29 yards), accounting for more than half the total penalty yardage.

Buffalo had 164 team rushing yards, and a 6.4 average per carry. Mike Gillislee, the replacement for the injured LeSean McCoy, had 85 yards on 12 carries. Particularly galling to the Patriots was a muffed punt by Colton Schmidt early in the third quarter, which went for 16 yards on fourth and 15 on the Buffalo 20. The Bills eventually scored a touchdown on a Taylor 26-yard scramble, also on fourth down. Tackling was a problem all day for the Patriots, especially when trying to sack Taylor and with Gillislee running between the tackles.

Passing was also a slight problem for the Patriots, despite Taylor misfiring on many throws. Buffalo outgained the Patriots, 376-357. The Patriots were able to win because Taylor could not make important plays when he had to, and the large number of Buffalo penalties. But if the offense cannot continue and make up for defensive lapses, the Patriots could wind up getting bitten on the ankle in December, and especially January.

Taylor finished 19 of 38 passing for 183 yards and a rating of 63.8. He threw no touchdowns but also no picks. Robert Woods had four catches, Walter Powell had 59 yards receiving to lead the Bills. Taylor did manage to complete passes to nine different receivers, but that was more of a by-product of various receivers having to leave the game with injuries.

Chris Hogan, Julian Edelman and Danny Amendola had the other three touchdown receptions for the Patriots. Hogan, playing in front of his former home fans for the first time, had four receptions for 91 yards. Obviously the object of disgust from some fans, a fan threw an adult object at Hogan while making a third quarter catch on a bubble screen for three yards. The Patriots scored a touchdown on a one-yard plunge by LeGarrette Blount two plays later.

In addition to his three catches for 29 yards, Amendola opened the second half with a scintillating 73-yard return. Two plays later, Brady found Edelman for a 12-yard touchdown to complete a double score (Stephen Gostkowski hit a 51-yard field goal at the end of the first half) to make it 24-10 Patriots.

The Patriots were clearly a different team on Sunday than they were in Week 4, especially on the offensive side of the ball. Unlike going up against Jacoby Brissett, who was nursing an injured thumb on his throwing hand which forced the Patriots to further dumb down the offense, there was no dumbing down anything on Sunday. In his postgame press conference, Ryan literally conceded the division to the Patriots, saying that “they were the better team”, and that “even if we run the table, we aren’t going to catch them”. Ryan paid homage to Brady several times, obliquely acknowledging that their shutout win in September has to come with a big asterisk attached to it.

Heading into their bye week, the Patriots are at 7-1, the best record in the NFL. Except for that Buffalo game at home, the Patriots look far superior to any team they have played, especially on offense, even with Jimmy Garoppolo at quarterback. For the second half of the season and beyond, the fortunes of the Patriots may hinge on, injuries notwithstanding, the play of the defense. The Patriots continually feature “bend but don’t break” zone coverage, allowing for short passes but nothing long. The Patriots are also deficient in the pass rush (Taylor was sacked only once today but hurried on several other occasions), as they are content to just keep the play in front of them.

The next Patriot game will be in 2 weeks, on Sunday night at Foxborough against Seattle, the team they beat in Super Bowl XLIX. Given two weeks to prepare for Seattle, expect Bill Belichick to be on point with a team that no longer has Marshawn Lynch and with Michael Bennett nursing injuries.

The Patriots will never say this publicly. But they have to be beyond elated to stick it to Buffalo at home after suffering their only 2016 loss to them. Any win over Rex Ryan is sweet. And Ryan may be correct. Barring a calamity of unseen proportions, can the Patriots be caught in the division?

Enjoy your week off next week, and if you want to know where Brady will be, you’ll likely have to ask his wife. “Other family members” have that call, he said.