6 years ago at 11:01 am ET
Follow @IanLogue
Posted Under: Patriots Commentary 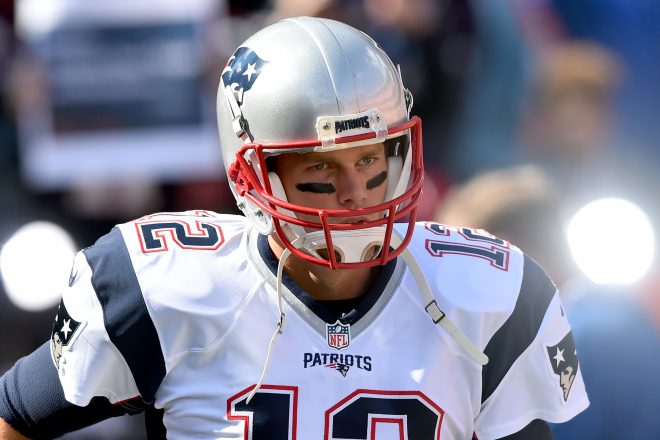 Some final notes and thoughts heading into Sunday’s game:

1) Things Should Be Different Against Bills’ Taylor This Time – With the Patriots set to play the Bills on Sunday, one thing that stood out from their previous match-up was how much success Tyrod Taylor managed to have while the Patriots were handcuffed by Jacoby Brissett’s thumb injury during their 16-0 loss to the Bills earlier this month.

In that game, Taylor finished 27-of-39 for 246 yards and a touchdown, with his 69% completion percentage ranking him second among quarterbacks the Patriots have faced so far this season with 20 attempts or more against them.

Looking closer, the area in that game where Taylor did the most damage was in the first half, where he completed 77% of his passes (17-of-22 for 165yds and a TD) after he missed on just five throws.  That was second only to Andy Dalton’s 81% first-half performance against New England (13-of-16 for 143yds) after he missed just three.  But one of the key differences in that meeting was the fact New England was forced to rely on the running game for the first two-quarters and didn’t have much success, rushing for 37-yards on 13 carries while going 0-for-5 on third down.

The plan by the Patriots coaching staff in that contest seemed to be to keep the ball out of Brissett’s injured throwing hand, with the rookie attempting just three pass attempts in the first half as he battled through a thumb injury. That left the Patriots a bit one-dimensional, which allowed the Bills to build a 13-0 lead that was just enough where they couldn’t come back from it. It also left the defense on the field for nearly twenty minutes over that span, with Buffalo holding a 19:49 – 10:11 edge in time of possession.

That will likely change this weekend, where Sunday’s first half should play out a little differently.  In their previous meeting in Buffalo last season, it was the Patriots who outscored Buffalo on the road 24-13 over the first two quarters, which ended up being the difference in the game after the Bills ran off 19 points in the fourth quarter before losing 40-32.

The bad news is, if that plays out and the Patriots build a big first-half lead, Tom Brady has been lethal in the second half since coming back from his suspension. Looking at the numbers, he goes from a 73% completion rate with four touchdowns in the first half, to a 79% completion rate over the final two-quarters, along with his other four touchdowns.

But last Sunday’s game in Pittsburgh was a reminder of the difference in this rematch, as the Patriots went to LeGarrette Blount on the ground 11 times for 74 yards and a touchdown, needing Brady to attempt just 8 throws in the second half.

With Blount running this well Brady has the luxury of a balanced attack that kept Pittsburgh completely off balance, enough so that things opened up for Brady to hit on two throws of over 30-yards to tight end Rob Gronkowski late in this contest, one of which was a touchdown.

Taylor might have the advantage of home-field but he’s no longer the more experienced quarterback on the field this time around and the players are already heading into this game with a big chip on their shoulders given what transpired prior to their last meeting.

It should make for another great battle, and Taylor should be hoping his defense can keep Brady at bay and keep this one close.  If not, with the way the veteran QB is playing, he’ll be in for a long day. 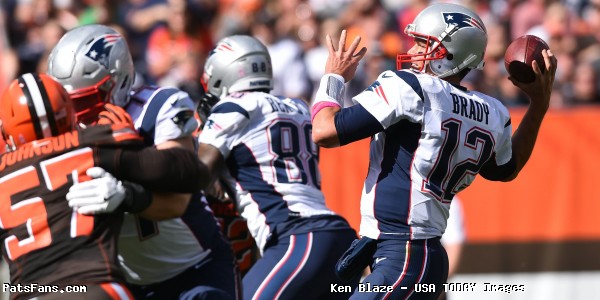 Brady’s been unreal since returning from his suspension. (USA TODAY Images)

2) Brady finishing as strong as he’s starting – One other thing that stood out was the fact that Brady’s 1st and 4th quarter totals are ridiculous so far since he’s come back, with the veteran QB getting off to a great start and finishing even better.

It’s pretty remarkable and it’s been a big key to their success over the last three weeks.  It’s also yet another reminder of why he’s the best in the game, and a big reason why it’s hard not to like their chances of playing in February if he keeps it going.

3) Second Half Improvement By The Defense – The defense seems to be taking a hit by critics who have been frustrated by some of the team’s seemingly recent struggles, but a closer look reveals an interesting difference when you look at their performance in the second half when it comes to dealing with opposing quarterbacks.

Quarterbacks have had a fair amount of success in the first half, with all but one finishing with a completion percentage of 63% or better among quarterbacks with 10 or more attempts. 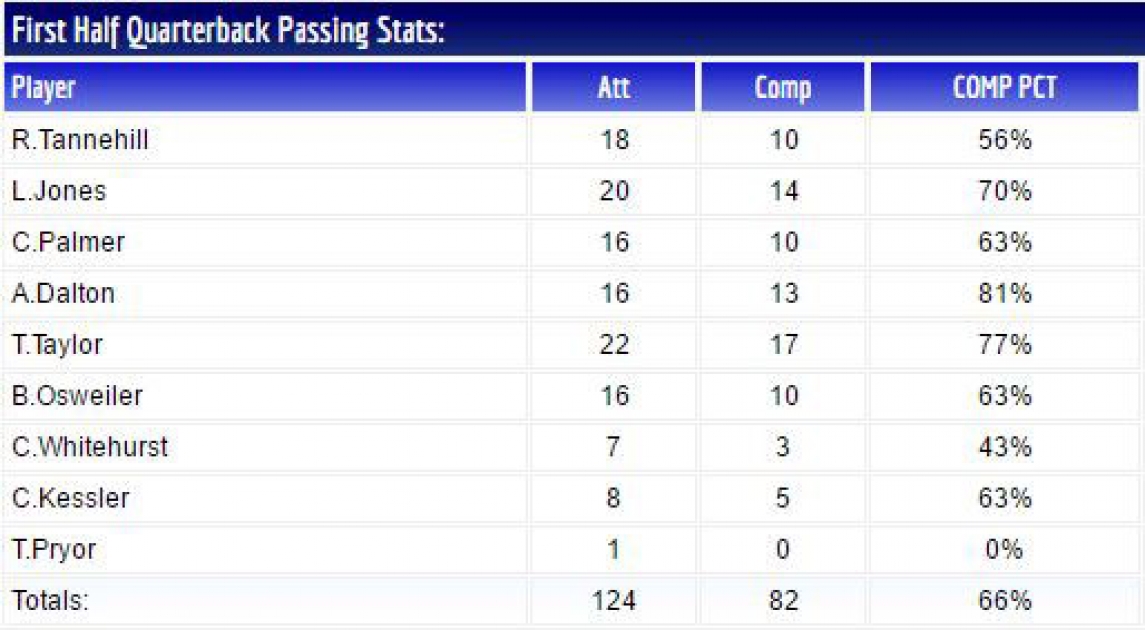 However, in the second half, it’s been a different story. Four of those seven quarterbacks with 10 or more attempts each saw their completion percentages drop below 60%, which includes each of the two quarterbacks they’ve faced the last two weeks in Landry Jones and Andy Dalton. 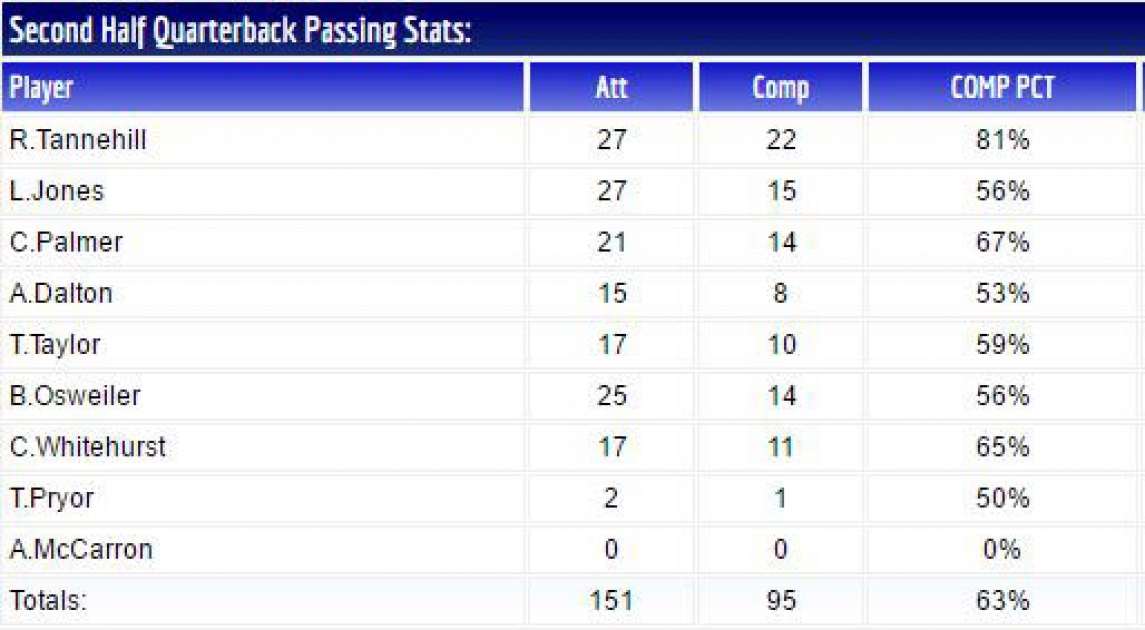 It’s a great job by a defense that continues to improve, which has been the hallmark of Bill Belichick’s defenses over the years. History has shown that they tend to get better as the season progresses and hopefully after what we’ve already seen, it’s a trend that continues. 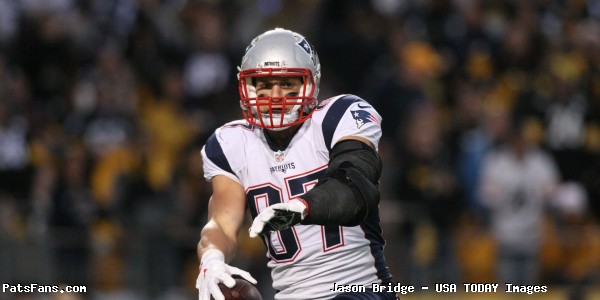 4) Edelman and White Start it Off, Gronk and Bennett Finish It Up – One thing that’s interesting is the strong shift in numbers from the first half to the second since Brady returned, where Brady seems to spend the first two quarters getting Julian Edelman and James White going early, only to see the trend shift to the tight ends in the second half. 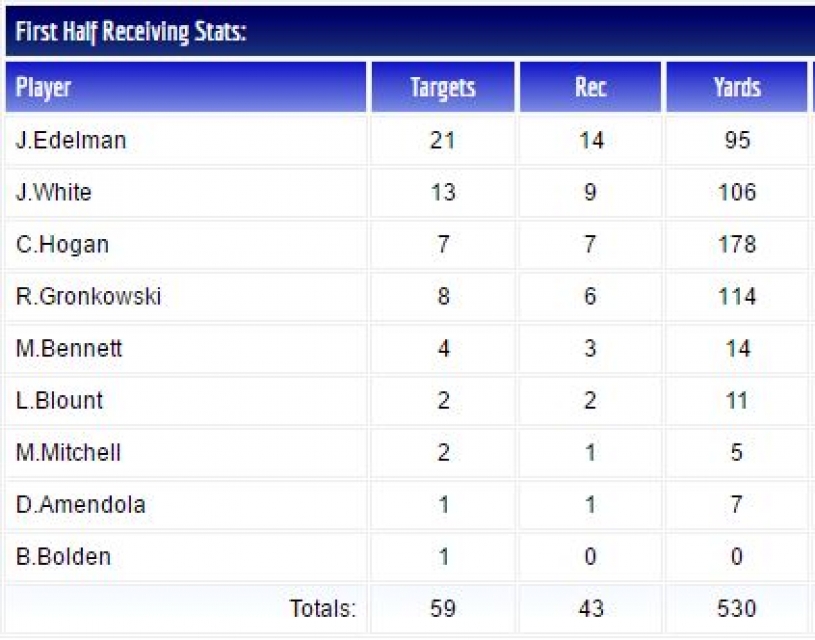 Looking at the last three games with Brady back under center, over the first two quarters, Edelman and White have gotten the lion’s share of the targets, with Gronk and Bennett seeing limited attention as they open things up underneath for each of those two players.

However, in the second half after the adjustments are made, opponents seem to have a tough time keeping up with Gronk and Bennett, as you can see a dramatic shift in the targets toward those two players, which explains a lot of the success Brady has had over that stretch. 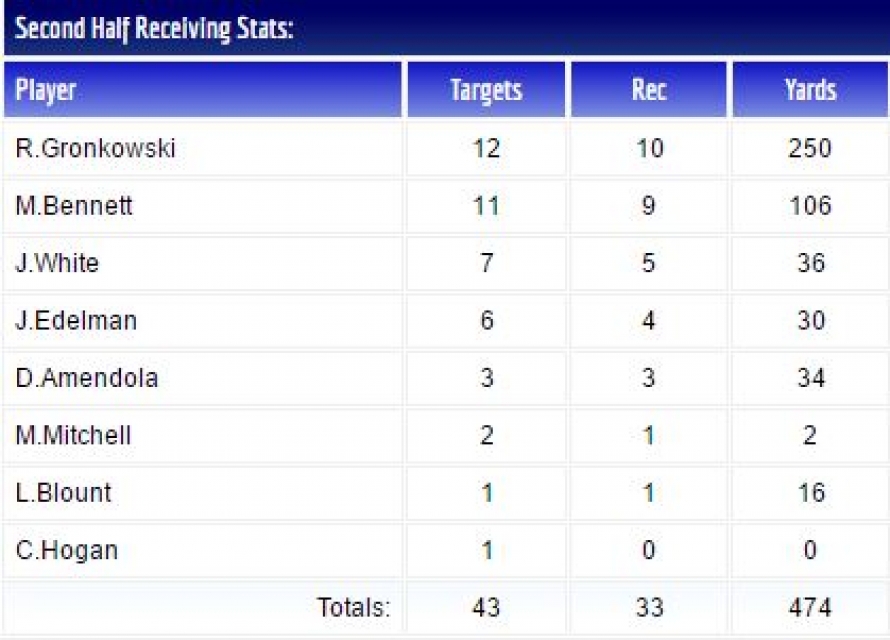 It’s a nice snapshot of how the Patriots adjust and it paints a terrific picture of how well they utilize every player in their offense. But it will also bear watching this weekend because Martellus Bennett was held out of practice on Friday with an ankle injury, which after the trade of A.J. Derby this week, could leave them with just Rob Gronkowski heading into Sunday’s match-up.

5) Deep Ball Not a Problem For Brady – Through his first three games back Brady is having some pretty good success hitting on his deep passes down field.

The veteran QB so far has hit on 10-of-13 (77%) on passes of over 15-yards so far this season, hitting all three of his attempts on his deep left throws, 2-of-3 on throws down the middle, including a touchdown and 5-of-7 with a touchdown on deep right passes. 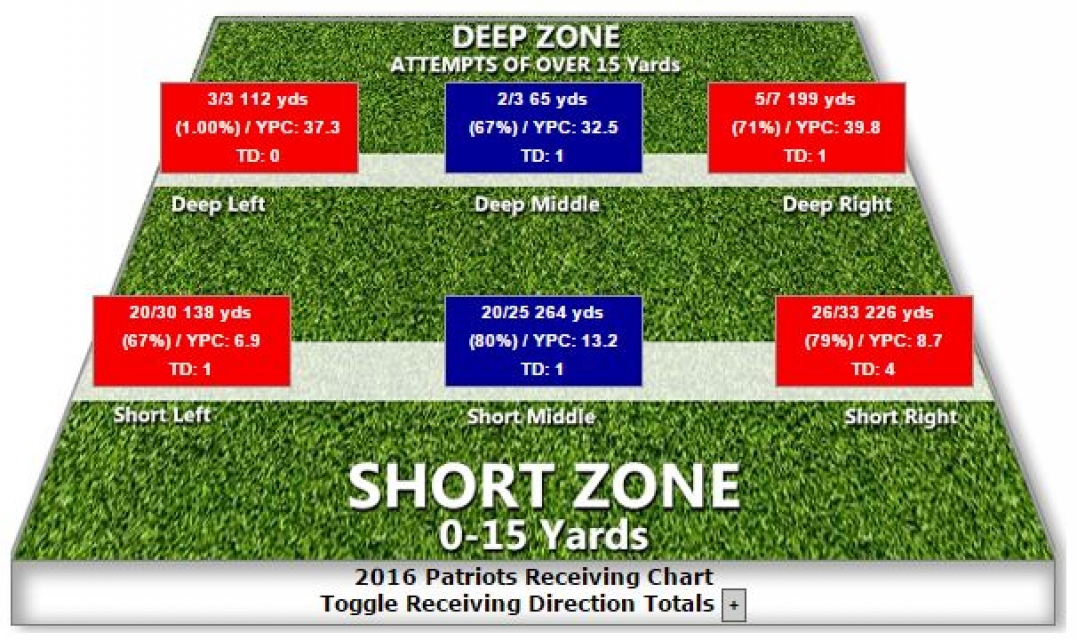 This seems to be something he may have spent some time working on during his suspension, and his overall accuracy has been sharp since he’s come back. It’s a big improvement from last season where he was 18-of-34 (53%) on deep left throws, 13-of-28 (46%) on deep throws down the middle and 10-of-38 (26%) on deep right throws.

As Brady always likes to say, he’s always working hard to improve. With another weapon now seemingly added to his arsenal, it’s only going to make life even more difficult for opposing clubs.

6) Levy Reminds of a Better Time in Buffalo – It was hard to watch Chicago native and former Bills head coach Marv Levy get recognized Friday night without realizing how badly things changed after his coaching days in Buffalo came to an end.

The Bills coaching legend was honored during the fourth inning of game three of the World Series at Wrigley Field as the 91 year-old former coach was on hand to enjoy the home town Cubs battle the Indians. But one thing that came to mind was the fact that seeing Levy was a reminder of how important it is to appreciate the good times here in New England, because as Bills fans can attest, they obviously don’t last. Buffalo was once among the AFC East’s elite, having been one of the best teams in the Division during Levy’s career. During his run as coach from 1986-1997, he compiled a regular season record of 112-70 and six AFC East titles, while leading the Bills to four straight Super Bowl appearances despite coming up short in each one.

But the biggest thing that sticks out is those teams handled themselves with class and were one of the more respected opponents for opposing teams, with the match-ups with New England certainly taking on a different feel than that of today’s team. The reputation and image Rex Ryan has built has to have Bills fans longing for the old days, where Levy carried the club with class and was the type of leader that teams look for.

It’s a reminder of the fact that someday Belichick will be doing something other than standing on the sideline at Gillette Stadium and it makes you wonder what things will look like years from now when that day finally comes. We know it won’t be Brady coaching the team, but whoever it is, hopefully things work out a little better here than they have to this point for the Bills.