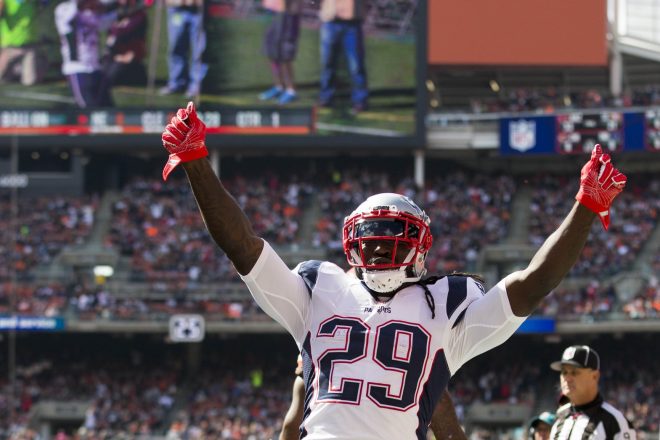 Patriots Make Two Trades on Tuesday – On Tuesday the Patriots made a couple of trades, with one helping them for the immediate future, while one may help them in 2017.

They acquired LB Kyle Van Noy from the Lions, with ESPN reporting that the Patriots will be exchanging a sixth-round pick in the 2017 draft for the Lions’ seventh-round selection.

Adding a linebacker makes sense given the injury to Jonathan Freeny along with the fact both Jamie Collins and Dont’a Hightower have each been banged up, with Bill Belichick opting to try and fill out a group that is likely looking forward to having a bye to heal up a bit after they get through Sunday’s battle against the Bills.

Meanwhile, the Patriots shipped tight end A.J. Derby off to Denver in exchange for a 5th round draft pick in 2017, which is one round higher than where the former sixth-round pick was taken.  The loss of Derby now leaves them with the task of figuring out who they’ll have at the number three tight end spot behind both Rob Gronkowski and Martellus Bennett.  One option could be to bring back Bryce Williams, who is currently in Los Angeles on the Rams’ practice squad and could be added to New England’s active roster.

Williams was let go at the end of training camp but worked hard, falling victim to a numbers game thanks to a crowded group that included the likes of Rob Gronkowski, Martellus Bennett, Clay Harbor and Derby.  After being let go from the Patriots he landed with the Rams and has been on their practice squad ever since.  Bringing him back would shorten the learning curve given his familiarity with the system while also allowing them to gain some perspective on Los Angeles, who the Patriots will face in December.

Oddly enough, Williams recently talked about his experience in New England, which he enjoyed, telling HeroSports.com that being with the Patriots was a place where he felt he could contend for a spot, or at least learn as much as possible.  He reflected on his first time in the locker room, which he called “awesome”.

“I walked in the locker room and saw Tom Brady and it was kind of crazy,” Williams said. “I was like, ‘hey Tom, and he said, hey Bryce.’ It was pretty awesome, but I had to play it cool. But now I can say I caught passes from one of the best quarterbacks of all time.”

Whether or not another shot here in New England is another story.  For now he remains optimistic that he’ll get his chance eventually and the fact he’s even in the NFL is something he’s proud to have accomplished.

“It’s all really surreal,” Williams said. “It hasn’t been easy, but this league is always changing. I could get that call to join the 53-man roster any day. And I’ll be ready.” 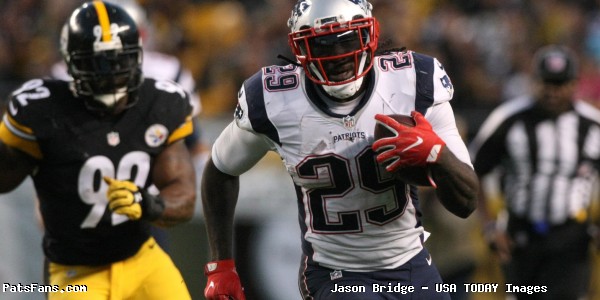 Blount has been terrific this season. (USA TODAY Images)

McDaniels Praises Blount – Given how many carries LeGarrette Blount has this season, one thing that’s surprising while looking at his numbers is the fact that of his 566 total rushing yards, 344 of them have come in the second half of games, with his yards per carry average sitting at 4.6.  That’s higher than the 3.2 he’s rushed for in the first half, which has seen him carry the football 69 times for 222 yards.

According to offensive coordinator Josh McDaniels, the fact that he’s been he fact he’s been able to do that is a testament to the veteran’s hard work week in, and week out.

“Well, LG [LeGarrette Blount], he prepares hard every week; practices hard and takes care of his body,” said McDaniels during his conference call on Tuesday.  “He tries to do the things that are necessary to make sure that he continues to feel good as the season progresses, like all good backs are going to have to do. The guys are getting tackled 15, 18, 20, 25 times a game. They take a lot of hits and it requires a lot of time and effort to make sure that you’re ready to go each week.”

“He certainly has done his job when we’ve asked him to do that. He helped us the other day in terms of – he caught a pass or two. He’s protected the quarterback, and then obviously, he’s run the football. He continues to do what we ask him to do and he always prepares hard and is ready to go each week. We’re going to need another good week of preparation from him along with the rest of our guys on our team”.

Rowe Making Progress – Belichick gave Rowe some praise on Tuesday after the veterade made some plays during the team’s battle on the road against Pittsbugh last Sunday.

Rowe, who finished third on the team in tackles Sunday along with a pass defensed, seems like he’s starting to get comfortable and accrding to Belichick is getting a little better each week.

“I think he’s done some good things the last couple of weeks,” said Belichick during his conference call Tuesday.  “Still there is some obvious newness for him which is to be expected, and each week is a different week in terms of matching up against our new opponent. But in terms of working with his teammates, communication, making adjustments, things like that – it gets a little better each week which is a good thing.”

“I think we have a way to go but he has certainly had a positive impact in the opportunities that he’s gotten over the last couple of weeks so we’ll just see how it goes.”

Patriots work out three linebackers – According to ESPN’s Mike Reiss, there were three players who worked out for the team on Tuesday, with 2016 7th round pick Trevor Bates of the University of Maine among those who worked out at Gillette Stadium.

They also added defensive back Shamiel Gary to the practice squad.

Madden has appreciation for Belichick – When you look back at the names that Belichick is up there with when it comes to wins, one thing that tends to be forgotten is the fact he’s been able to do it in an era where the system generally works against coaches and makes winning so many games that much more difficult.

In an interveiw with Sports Illustrated, former Raiders Coach and broadcaster John Madden said that he has a lot of respect for the Patriots head coach, especially considering how much harder it is to accomplish given the era of free agency, the salary cap, etc.

“Now, you have team and the next year you have a totally different team. So you have to coach them in a totally different way and do different things. And the way Bill Belichick does it, I mean, to me, the job that he does and other coaches that can kind of keep it on a low, it’s amazing because it’s a lot harder than their predecessors had to do it.”

Madden also said that if he was still coaching and he had to pick a quarterback to start for one game, Tom Brady would be his pick.

“Tom Brady. That would be, for me, a relatively easy choice,” said Madden.  “I mean, we’re not talking about over a long period of time. If I just had a game now or year from now, I would want Tom Brady. Now before this year, it would’ve been tough for me to decide between Peyton Manning and Tom Brady.”