6 years ago at 8:20 am ET
Follow @SteveB7SFG
Posted Under: Patriots Film Room

Reviewing this week’s game film via NFL Gamepass from the Patriots win over the Steelers just highlights what a mismatch nightmare Rob Gronkowski is for opposing defenses. The Steelers did their best to neutralize Gronk and fellow tight end Martellus Bennett for most of Sunday’s game but at crunch time in the second half, he made key plays in the two drives that capped off a Patriots win.

We’ve highlighted a few of the plays from the Patriots offense that show some good play calling by Pats Offensive Coordinator Josh McDaniels, some very good execution, and the complete player that Gronkowski is.

James White 19-Yard TD: On the Patriots first scoring drive of the day, they moved methodically down the field taking up nearly half of the first quarter, running on eight of the plays and passing on just four, moving 61 yards to the Pittsburgh 19-yard line. There they faced a 3rd down and 2.

They lined up in a passing formation with four wide, two to each side, Mitchell and Amendola to the left, and Edelman and Bennett to the right. Brady is in the shotgun with White aligned to his left. 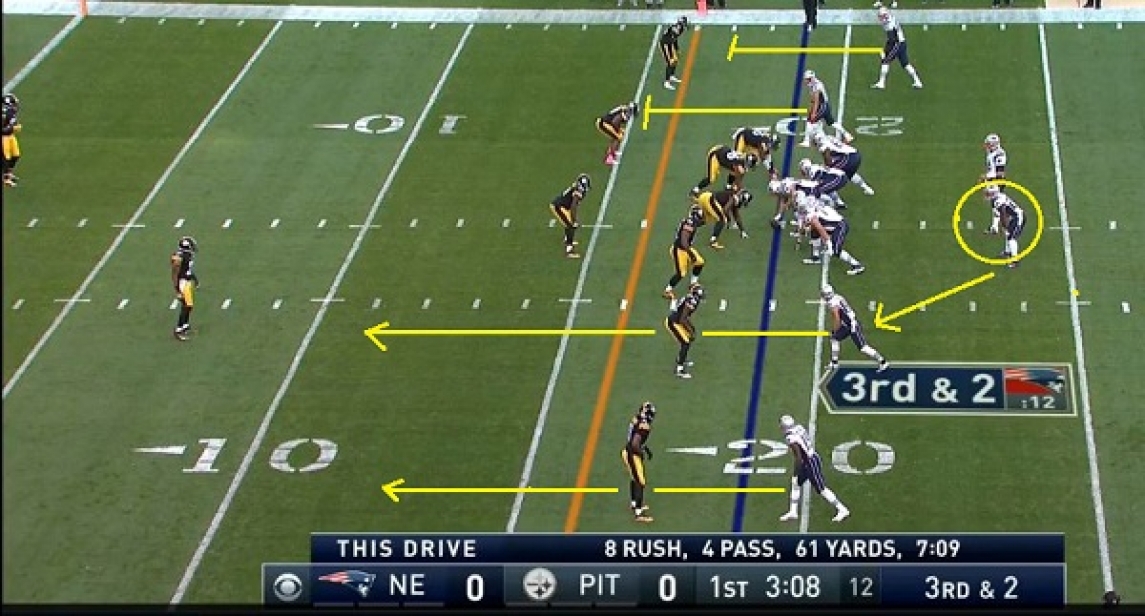 Pittsburgh shows that they will rush only three and moves their coverage players in the middle up tight to defend the sticks. They have two deep safeties at the seven and one-yard lines.

This was a nice play call by Josh McDaniels and good execution by the players. At the snap, all the receivers try to drag their coverage guys deep. White flairs out just behind the line of scrimmage at the numbers. Brady hits him with the pass and White has clear sailing down the field because of Joe Thuney. Thuney fired out from his left guard position and took down LB Lawrence Timmons who would’ve been in perfect position to stop the play for no gain. 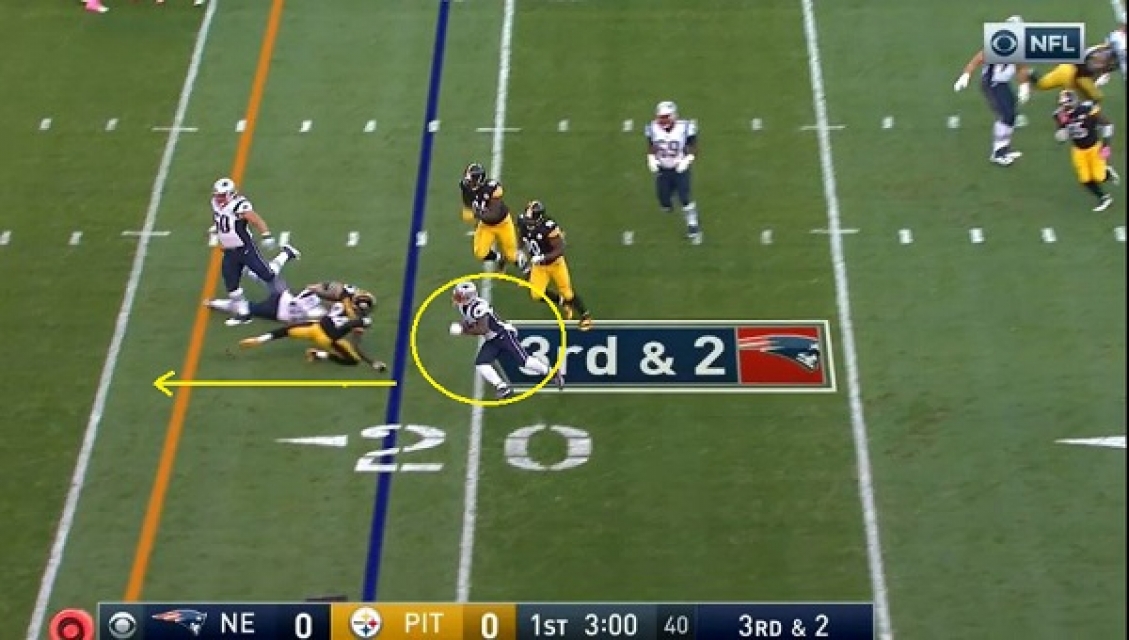 At the 15, White cut back against the grain of the Pittsburgh defenders flowing to the left attempting to cut him off. He then made a nice move inside and took it into the end zone to give the Patriots a 7-0 lead. This was a well-designed and executed play, especially by Thuney and White to cap off an impressive drive. 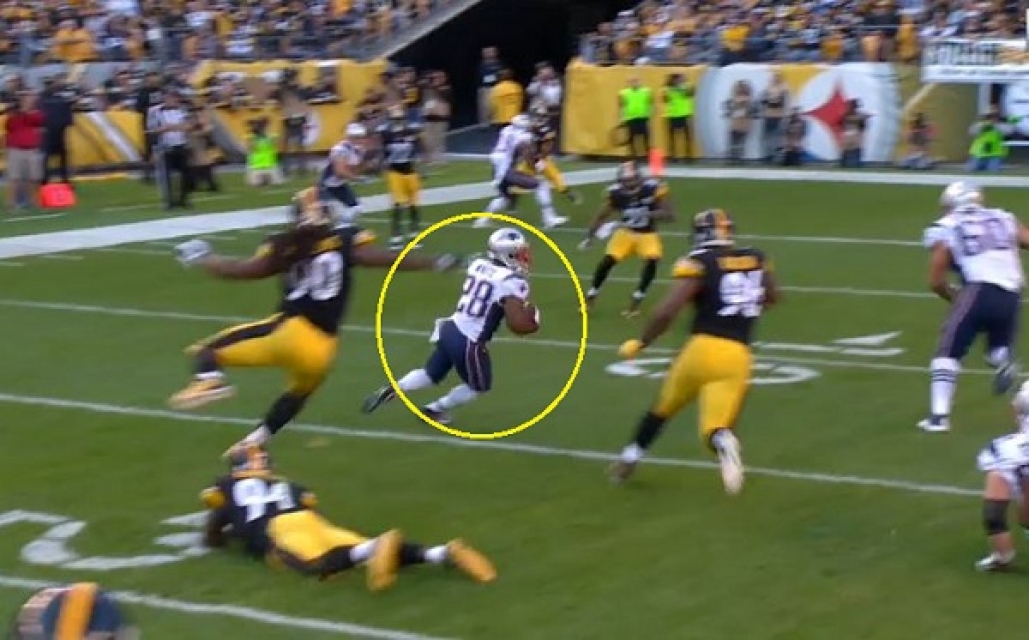 LeGarrette Blount 3-Yard TD: The Patriots on their third possession moved quickly down the field. After hitting a play to Gronkowski down to the three-yard line, the Patriots quickly line up in a goal line, run-heavy formation with both tight ends, Gronkowski and Bennett lined up on the left-hand side of the formation. Blount is the lone back behind Brady who is under center.

The Steelers weren’t prepared for the quick snap. Many of their players aren’t lined up yet or properly. There was still some milling around in the secondary. Neither safety, Mike Mitchell or Robert Golden is ready and that is exactly where the play is going to go.

At the snap, the offensive line blocks down to the right. Nate Solder gets a good push on DE L.T. Walton. Bennett seals off James Harrison to the inside and Lawrence Timmons, coming over in support is caught up in the wash. Gronkowski fires straight off the ball and blocks Mitchell, which is a mismatch. Blount runs right in the gap created by the tight ends. Golden was a tad slow to react and doesn’t get there in time to stop Blount from rumbling in the end zone for the second score of the game. 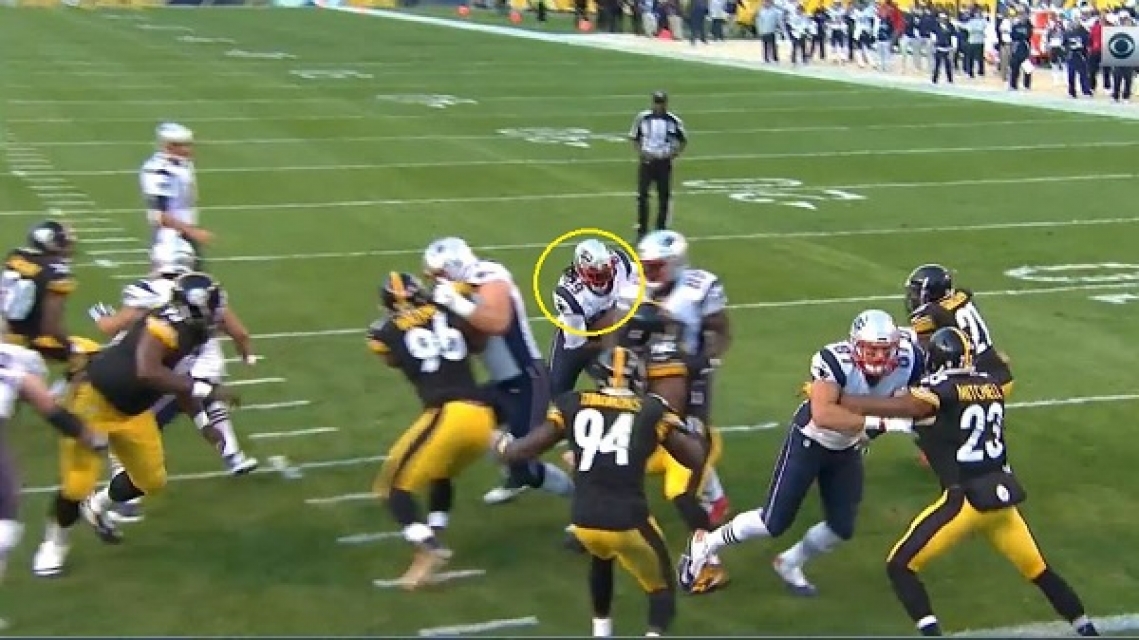 Gronkowski 36-Yard TD: After the Steelers had narrowed the Patriots lead in the third quarter to 14-13, the Patriots answered with a 5-play, 75-yard drive to give them a 20-13 lead. The Patriots faced a 3rd down and 7 from the Pittsburgh 36-yard line.

The Patriots went to a four-wide passing formation with Chris Hogan split wide right and Danny Amendola, Julian Edelman and Gronkowski on the left side. James White is the lone back and is standing next to Brady on his right while Brady is in the shotgun.

Pittsburgh is rushing just four and is aligned with five players either at or just in front of the first down marker attempting to take away the short pass in the middle of the field. Brady sees the numbers and alignment, immediately recognizing that Gronkowski will be in single coverage. 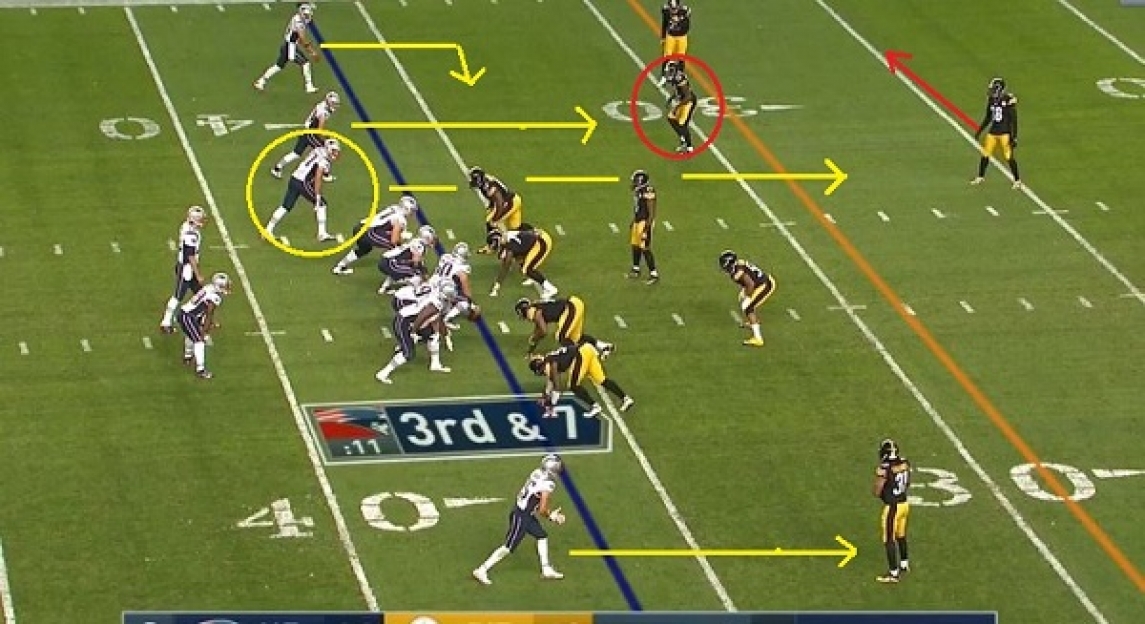 At the snap, Gronkowski runs straight down the seam and blows right by Golden who whiffed trying to jam him at the line. Edelman runs a short cross in the middle and Amendola takes his route down to the 20 and pulls his defender and the deep safety outside. Gronkowski splits the safeties and is wide open. Brady throws a dime right on the money. Gronk corrals the ball at the 13-yard line and has an easy touchdown. 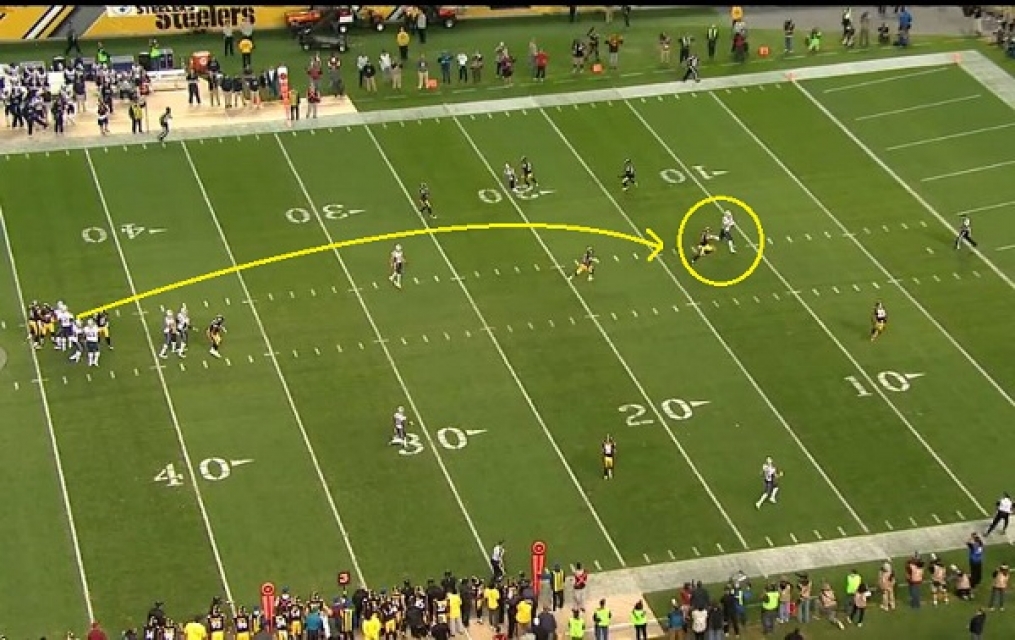 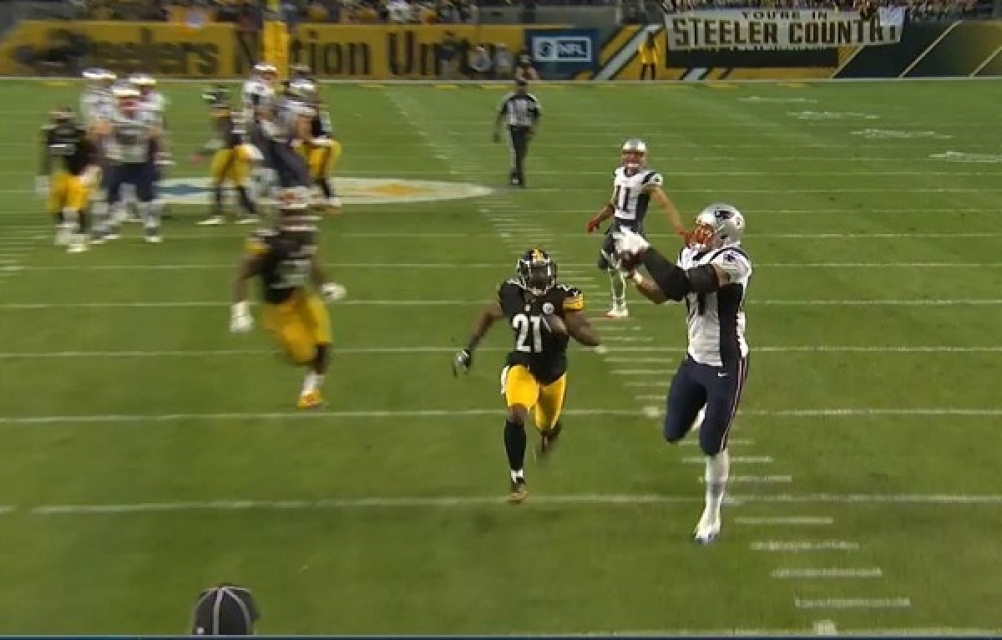 Gronkowski 37-yard Reception: Following the Patriots touchdown, the Steelers moved down into the Patriots territory and kicked a FG which narrowed the lead to 20-16. Brady then engineered another impressive drive to put the game away. The drive covered just six plays and 75 yards with the key one being Gronk taking up nearly half of it with this play.

Facing a 1st and 10 at the Pittsburgh 42-yard line, the Patriots line up in what looks like a run formation. Brady is under center; Bennett is aligned in-line on the right-hand side. Gronk on the left. Edelman is in the slot and Mitchell wide to the left. Blount is the sole back and seven yards deep in the backfield. 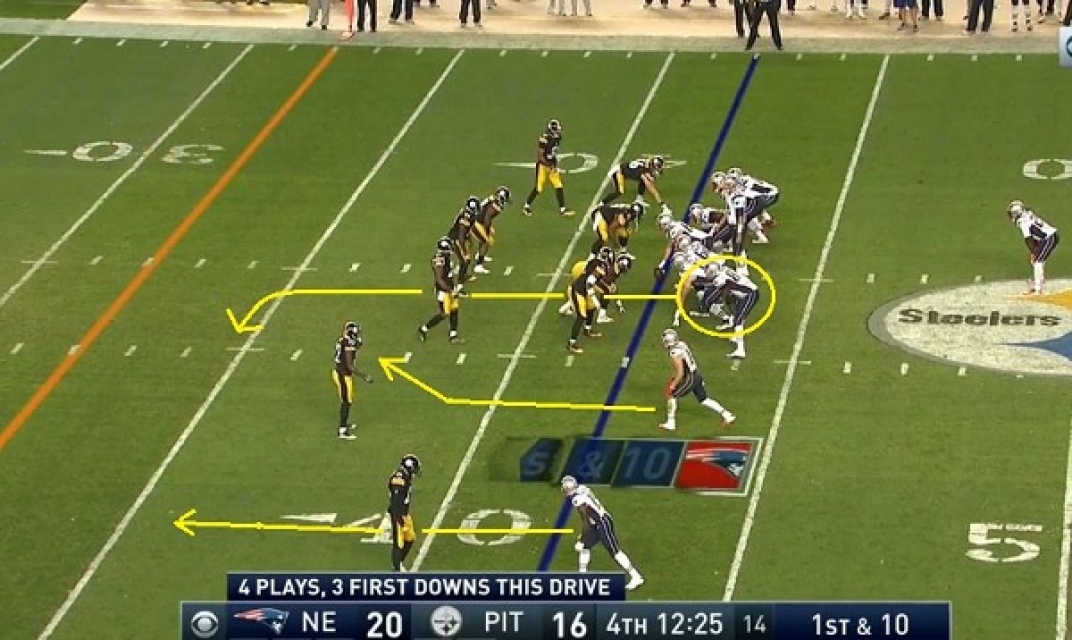 At the snap, Mitchell runs straight down the field. Edelman runs a deep post. Gronkowski runs straight for about five yards and dipped his shoulder and Golden bit. Golden moved quickly to cover the deep post but Gronkowski digs left into the area vacated by Edelman and Mitchell.

He has about 4-5 yards of separation on Golden who won’t catch him. It is an easy throw for Brady, and he hits Gronkowski in stride at the 24-yard line. He then keeps rolling down to the five-yard line where he’s finally brought down. Blount would then run it in on the next play to put the game away. 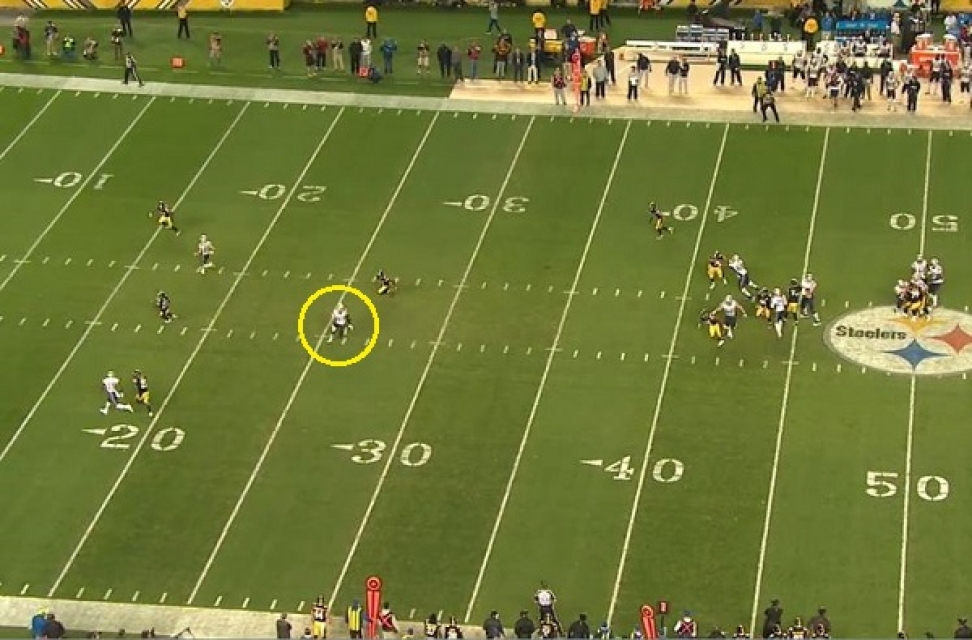 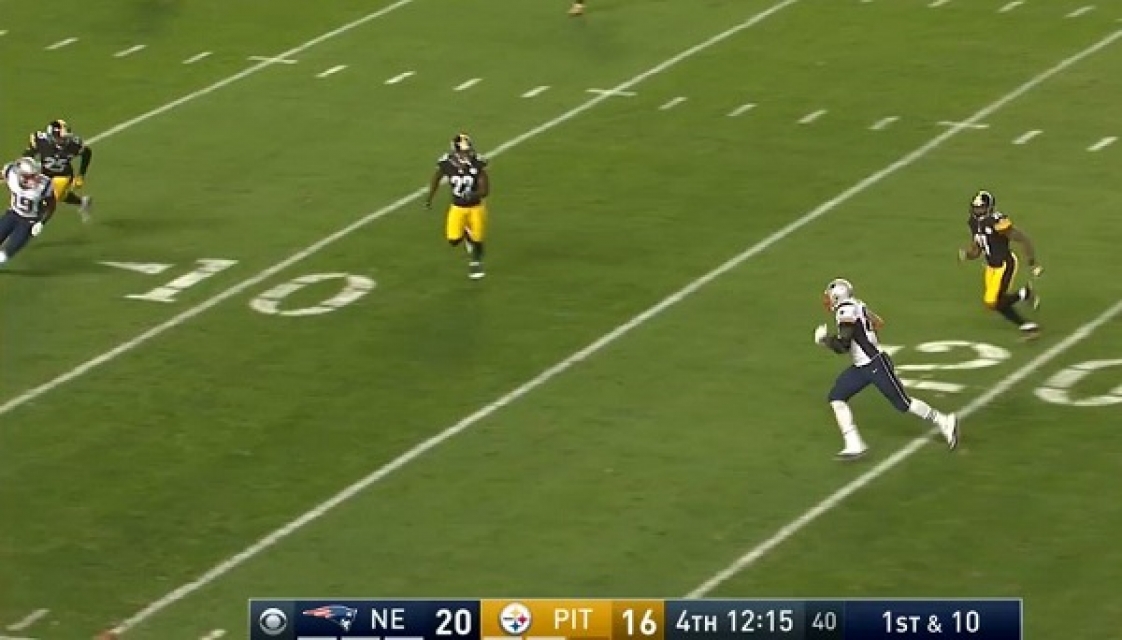 It is a testament to how talented and dangerous a receiver is in Gronkowski when the Steelers put so much effort into slowing him down and he still gets 93 yards receiving as well as a touchdown. The big man averaged over 23 yards per reception and punished the Steelers secondary for the second year in a row.