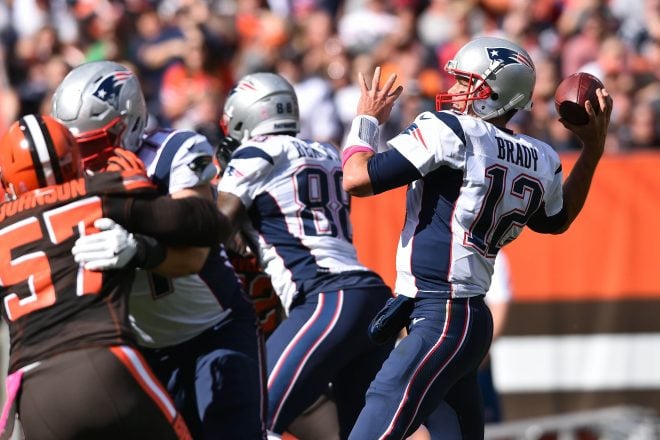 For the 26th time in his NFL career, New England Patriots quarterback Tom Brady has been named the AFC Offensive Player of the Week following the Patriots 33-13 win over the Cleveland Browns in Week 5.

Brady’s 26th Player of the Week selection is second all time in NFL History behind Peyton Manning with 27.

On Sunday, Brady completed 28 of 40 passes for 406 yards with three touchdowns and zero interceptions. The performance marked the eighth time Brady has passed for over 400 yards in a game, a first since he passed for 466 yards against the Buffalo Bills back on September 20th, 2015. According to the Patriots press release, “Brady finished with his 72nd career 300-yard game in the regular season, third in NFL history to the 98 by Drew Brees and 93 by Peyton Manning.”

The honor makes Brady the fourth New England Patriot to receive an award in 2016, punter Ryan Allen and Kicker Stephen Gostkowski each won an AFC Special Teams Player of the Week, while running back LeGarrette Blount earned AFC Offensive Player of the Month for September.

Tom Brady is the AFC Offensive Player of the Week for the bad things he did to the Browns.

Congratulations to Tom Brady on being named AFC Offensive Player of the Week, his 26th award, 2nd all-time to Peyton Manning. pic.twitter.com/jr4HTLNpFO