6 years ago at 8:12 am ET
Follow @SteveB7SFG
Posted Under: Patriots Commentary 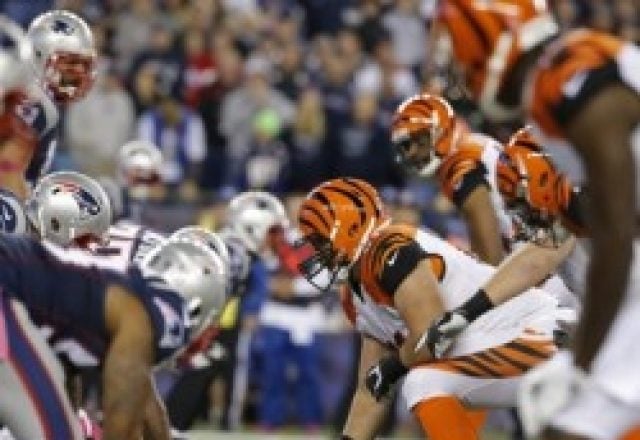 The Patriots return home to the friendly confines of Gillette Stadium on Sunday afternoon when they take on the Cincinnati Bengals. Kickoff is scheduled for 1 p.m. This is the second of three straight games that New England will take on opponents from the AFC North.

The Patriots (4-1), welcomed back QB Tom Brady as well as DE Rob Ninkovich on Sunday in Cleveland. The offense with their starting QB back behind center clicked very impressively as Brady led them to touchdowns on their first three drives as the team burst out to a 23-7 lead and cruised to a 33-13 win.

The Bengals (2-3) are struggling. Last season’s division champion is now facing in what is almost a must-win type situation if they want to repeat. They’re two games behind a Steelers team that is rolling and things don’t seem to be improving. They were blown out 28-14 in Dallas on Sunday, with two late scores making the score appear much closer than the game truly was.

Here are our Five First Impressions of the Bengals:

Offense Struggling Especially in the Red Zone: The Bengals offense is really struggling early in the 2016 season. The offensive line isn’t playing well allowing 17 sacks and is averaging only 3.4 yards per carry.  For a team with Jeremy Hill and Giovanni Bernard, that’s far too low.

The Bengals rank 10th in total offense but 25th in rushing offense. Additionally, the Bengals rank 20th in scoring, averaging 18.4 points per game. With Tyler Eifert on the shelf with offseason surgery as well as a back injury, they’ve really struggled to score, most importantly in the red zone.

The play calling of Ken Zampese has been criticized as being too conservative and when teams have been able to neutralize A.J. Green the team has struggled.  In the red zone where Cincinnati scored touchdowns on 66 percent of their trips a year ago, their scuffling along at 31 percent in 2016. Without Eifert in the lineup, teams are taking away Green and the rest of the cast hasn’t picked up the slack yet.

Things showed some improvement this week, albeit late in the game with Brandon LaFell getting his first two touchdowns in a Bengal uniform against Dallas. But this will bear watching this week.

Lewis, “This Isn’t Who We Are”: Cincinnati coach Marvin Lewis didn’t shy away from the questions that came after his team looked flat in Dallas and fell below .500 in 2016.

“Obviously, it was not a very good football game for us,” Lewis said. “First half to be down 21-0, threw up a touchdown [in the] second series of the second half right after we get stopped on offense. We didn’t well play enough and they outplayed us.”

While the Bengals defense was gashed for 180 yards by the Cowboys on Sunday, that was more indicative of the level of play of the Dallas OL than it was of the Bengals defense. Still, there are issues that need to be looked at defensively before they come to New England this week.

“Defensively, we gave up some plays where they got 7, 8, 13 yards,” Lewis said. “Crossing routes and things like that hurt us today. On third downs in the first half, we weren’t very good. They converted the three-or-four they had. They kept the drives alive when they had opportunities.”

Green is the ‘Must Stop’ Guy This Week: Bengals WR A.J. Green is one of the most dangerous receivers in the NFL. And with the rest of the offense still in search of its game, the Bengals are becoming increasingly reliant on him. It is becoming a case of if he has a monster game the Bengals win if he doesn’t they lose. That isn’t fair, even for one of the most talented WRs in the league.

The 6’4, 210-pound 6th year player from Georgia is always a matchup nightmare and will present a very tough defensive key for the Patriots smaller cornerbacks this week. Green dominated against the Dolphins two weeks ago using his size, speed, and physicality where he was targeted 12 times and made 10 catches for 173 yards and a touchdown.

With the Cincinnati offense needing a spark this week, they’ll look to their most talented offensive weapon first, to get him into the game quickly. He had just a single catch in the first half against Dallas as the team fell behind 21-0.

Dalton Playing Well Despite Struggles: There never seems to be a shortage of criticism leveled at Andy Dalton who, despite having solid seasons playing in the tough AFC North, is still looking for his first playoff win.

Dalton had the best year of his career in 2015 before going down with a thumb injury that cut short his year. And he’s playing better in 2016 despite not having his biggest and best red zone target in Tyler Eifert.

He’s attempting and completing more passes in 2016 than he did a year ago. Part of the issue is that with the struggles of the running game to get untracked, he’s been forced to throw more. But his accuracy is up and his interception rate is down.

“He keeps getting better every year,” Bengals offensive coordinator Ken Zampese said. We’re just the production over a long time of digesting plays and knowing how to fix them. And knowing how to salvage them.”

After losing productive wide receivers Marvin Jones and Mohammad Sanu this offseason, the WR unit has struggled to find their rhythm beyond A.J. Green. But at the end of last week’s game, Dalton found LaFell for a pair of scores that could foretell of a turning point for the offense.

Cincinnati Front Four Poses Tough Challenge: While the unit was gashed by the Cowboys on Sunday, don’t let that influence the fact that this is a very tough physical front four. Carlos Dunlap, Geno Atkins, and Domata Peko spearhead an excellent group that not only can stop the run but get after the passer as well. They also have Margus Hunt and the talented reserve sub-package rusher Will Clarke who has three sacks already this season.

They’ll be looking to redeem themselves this week and we all remember how disruptive they can be. When the Patriots visited there in 2013, they held New England to just six points in a big victory.

While the Patriots will look to remain balanced, or close to it with LeGarrette Blount running the ball this week to keep the defense honest, this will be a tough unit to run on. One caveat from a week ago, not many teams have an offensive line like the Cowboys.

They’re also backed by the very physical MLB in Vontaze Burfict who returned two weeks ago from a suspension and is a downhill, spark plug for the front seven.