The Patriots early season success can be attributed to a number of different factors. Not the least of which is the coaching of Bill Belichick, but the play of the offense line has to be considered one of the pleasant surprises thus far in 2016.

With the suspension of Tom Brady, the biggest question this summer was, “How will the Patriots fare in the first quarter of the season?” The answer thus far has been, just fine. The team is off to a 3-0 start and like many had envisioned prior to the start of the year, in no large part to the offense leaning on the running game.

An even bigger question to me than how would the backup quarterbacks play this season, was how would the offensive line handle being tasked with handling the running game. Especially when the opponent knew the Patriots were going to run. The offensive line a year ago was injury ravaged, of that there is no doubt about that. But their level of play overall was poor and Brady was nearly decapitated at times out there a year ago.

But the return of Dante Scarnecchia, the return to health of Nate Solder and the addition of Joe Thuney has been a panacea for the Patriots offensive line. Thru three games the Patriots lead the NFL in rushing and the play of the offensive has been markedly improved. The interior three of center David Andrews, and guards Shaq Mason and Thuney are perhaps the biggest pleasant surprise as they’re playing very strong and get better as the game goes along. 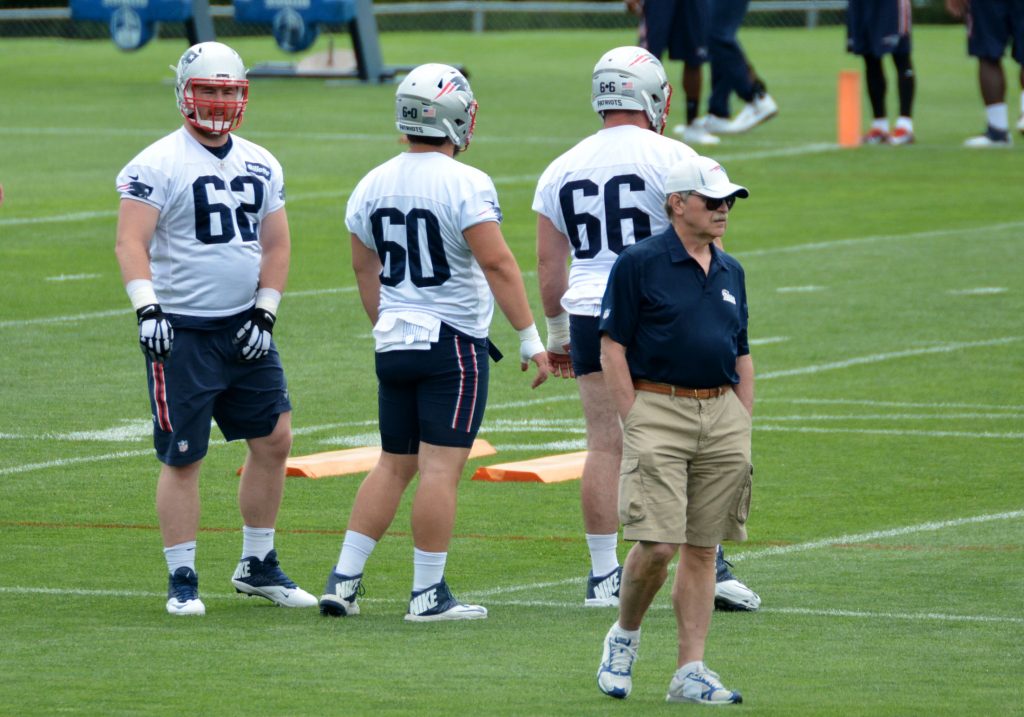 Joe Thuney wants to know “What are Pink Stripes?” Thuney (62) and David Andrews (60) have been solid this year.

“I think all our backs have the ability to make yards. They’ve all been productive. We’ve seen it in the preseason, we’ve seen it through the years with some of these guys, depending on which guy you want to talk about, but we had to give him a chance,” he added. “You’ve got to give them a chance to have some type of opportunity to operate with some space or momentum, just something. No back can gain yardage when there’s just no place to run. I don’t care how good the guy is.”

Belichick’s comments are telling because they go against the popular notion that Blount dances too much when he gets the ball. What is he, or any other back supposed to do when there is nowhere to run. We’ve all seen, too often that the Patriots’ backs getting hit as soon as they receive the handoff, often deep in the backfield. That isn’t the running backs’ fault.

Blount is on pace for nearly 1600 yards rushing in 2016. While the offense will change once Brady returns from his league imposed vacation, one can’t say enough about the performance and workload that was placed on his shoulders. And he’s come through in the clutch for the team, especially in the fourth quarter as he’s been a closer for the team.

“We’ve always had a lot of confidence in LeGarrette,” Patriots offensive coordinator Josh McDaniels said. “He has had a lot of big games here for us and helped us win a lot of games, and he doesn’t just carry the ball, he did some things in terms of protection. He helped us on the edge with some of their good pass rushers. LG is always ready to go, practices hard… prepares hard for each week, and whatever we ask of him he embraces his role on our team.”

Two other additions that can’t be overlooked this season has been the play in the running game of Martellus Bennett and James Develin. Bennett has always been known as an excellent run blocking tight end, and it is an area that he has always prided himself in. He and Rob Gronkowski give the Patriots the option of nearly having two extra tackles in the running game. They can also go out on pass routes and threaten the seams. Once Gronkowski’s hamstring is healthy, he and Bennett will be a tough duo to stop.

Develin’s value to the running game can’t be overstated. He was really missed a year ago and he is a devastating blocker as a fullback as he leads the way for the backs to follow in the running game. A look at some of Blount’s big runs this season usually entail him following Develin thru the hole and into the second level of the defense.

The pass blocking of the offensive line has been better, not great but better this year. Granted they aren’t passing on every down, which actually hurt their level of play when teams could just pin their ears back and come after Brady.

They’ll face another tough test in the Buffalo Bills defense this week. The Bills sacked Carson Palmer five times and picked him off four more on Sunday. But dedicating themselves to being able to run the ball and sticking with it has been a feather in the cap of Offensive Coordinator Josh McDaniels thus far this season. McDaniels creative play-calling and game planning has kept opposing defenses on their toes. And he’s able to do that due to their ability to run the ball effectively in 2016.

By: Robert Alvarez
Patriots Chairman and CEO Robert Kraft is honored by two organizations for his charitable and humanitarian work.
12 hours ago

By: Robert Alvarez
Bill Belichick issues a statement praising Vince Wilfork following his selection into the Patriots Hall of Fame.
13 hours ago

By: Russ Goldman
In this episode, Steve and Derek break down the 2022 Patriots regular season schedule. The guys also discuss Vince Wilfork's election into the team Hall…
23 hours ago