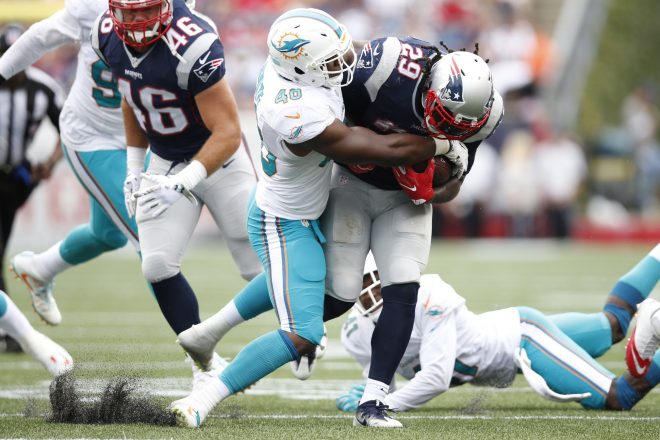 Brady ‘Proud’ of How the Patriots Are Playing – Tom Brady is now a little over two weeks from finishing his exile away from the game, and on Monday night he spoke during his weekly interview on Westwood One about how his team looked Sunday in their win over the Dolphins.

The veteran quarterback admitted during the interview that being away from his team has been tough, and he’s gained a different perspective by being forced to watch the Patriots on television.

“I was hoping to gain a little different perspective, and I think I have,” said Brady via Mike Reiss of ESPN.  “It’s amazing the way our team responds to adversity and the way our coaches prepare us for all these different situations that we face. I’m just proud of the guys for how hard they’re working. You can see it on TV, and obviously it’s really paying off. It’s great to be a fan of the Patriots and it’s really great to be a player on the Patriots. I definitely have gained that perspective, and hopefully we get to 3-0 on Thursday night.”

Brady is no stranger to injury, having endured a season-ending knee injury just minutes into the 2008 season.  He talked about what it was like watching Jimmy Garoppolo go down with a shoulder injury after Kiko Alonso wrapped him up and drove him into the ground, and said he definitely feels for what he’s dealing with.

“It’s tough … I feel for him,” Brady said on the program. “He made a great play to escape the pocket and made a great throw on the run on a third-down play. The linebacker hit him and landed on top of him. You see that quite a bit in the NFL. It’s a tough injury, especially your throwing shoulder … I know he’ll be back out there as soon as he can.”

Brady also went on to say that he expects Jacoby Brissett to be ready to go Thursday night against the Texans, and he said that he’s liked what he’s seen from the rookie.

“Jacoby has done a great job taking advantage of his opportunity as well,” said Brady. “He went in there [Sunday] and showed a lot of poise. He has a great demeanor about him. I love working with him. He shows up to work every day working hard. He’s very competitive, and I know our coaching staff will have him prepared and ready to go for Thursday night if he’s called upon.”

Reiss also has more from Brady, including his thoughts about Julian Edelman as a back-up for the Patriots, which you can read via this link.

Belihick attributes Blount’s Running Success to the Improvement in the Patriots offensive line – It’s obviously tough to run if there aren’t any holes to run through, and so far Bill Belichick believes his offensive line has been much improved so far through two games.

After being asked about LeGarrette Blount’s big performance on Sunday where the veteran rushed for over 100 yards in their win over Miami, Belichick explained that they’ve simply done a better job up front for him so far this season.

“The big thing that’s contributed to it is that he has had some space to run,” explained Belichick. “There were a lot of plays, too many plays last year where it didn’t matter who the back was, we just couldn’t get him started, couldn’t get him into any kind of space, couldn’t let the back build up any kind of momentum.”

“I think all our backs have the ability to make yards. They’ve all been productive. We’ve seen it in preseason, we’ve seen it through the years with some of these guys, depending on which guy you want to talk about, but we had to give him a chance. You’ve got to give them a chance to have some type of opportunity to operate with some space or momentum, just something. No back can gain yardage when there’s just no place to run. I don’t care how good the guy is.” 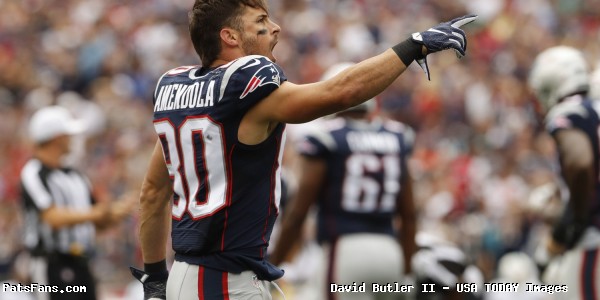 Amendola ‘Happy’ Long Landed Here – Danny Amendola spent some time with Chris Long before coming to New England, having played with Long in St. Louis before joining the Patriots.  Amendola spoke with WEEI on Monday and said he had conversations with Long before the veteran signed here, and he’s glad the defensive end decided to make New England his home.

“When he was looking to come here or go to another place, I had a lot of conversation about I wish he would come here for at least the end portion of (his) career or at least a year to see how it’s run,” Amendola said via NESN.  “Because I know where (he) had been in the eight years and I know what it was like playing in St. Louis. Not that it was bad. It was a great city, and I am thankful for that opportunity because it was awesome. I am really happy that a new guy like Chris is here to kind of figure it out.”

Long has been disruptive with a pretty busy stat line which includes a sack, two tackles for a loss, three quarterback hits, a pass defended, and a fumble recovery.  Needless to say, it seems like he’s figured things out so far and will be looking to build on that against the Texans on Thursday.

Patriots Bring in 8 Players Monday, No Quarterbacks – The Patriots continued doing their due diligence on Monday as they worked out eight players, but it appears for now that they’re prepared to take their chances with only Jacoby Brissett Thursday night, while rolling the dice against bringing in another signal-caller.

According to ESPN’s Mike Reiss, the Patriots brought in two defensive tackles, two defensive backs, two tight ends, as well as a running back and a surprising name at fullback.

Gronkowski, who is a fullback, likely has a tough road unseating James Develin but he could be a potential candidate for the practice squad.

Osweiler Remembers a Physical Battle – With the Patriots next up for Texans quarterback Brock Osweiler, one thing that stands out in his mind after his battle with them last year out in Denver was how much they hit him, which is something he hopes he’ll avoid this week.

“The one thing I do remember is obviously New England has a little bit of a blitz package on third down and that’s something that I’m going to go back and look at,” Osweiler said via HoustonTexans.com. “My game from last year with Denver when we played them and really look at and say ‘How could I be better in protection? Was there something that maybe I could have done to eliminate some of those hits?’”

The Patriots officially hit him seven times in that game and sacked him three times, but he believes that the experience alone of at least having already faced their defense will help him this week.

“I think it gives me a huge help moving into this week, especially with it being a short week,” Osweiler said. “We don’t have a ton of time to watch film, to game plan, to practice. So for me to have a little bit of experience playing against them I think will be a big help.”