6 years ago at 8:14 am ET
Follow @IanLogue
Posted Under: Patriots Commentary 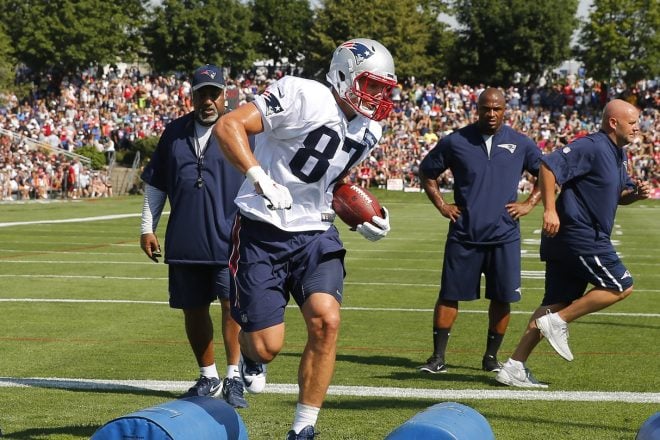 Patriots Wearing All Blue Next Week – The team unveiled their “Color Rush” jerseys for this week and it looks like they’ll be wearing all blue when they take on the Texans next week.

The uniforms were shown on Tuesday at the Pro Shop, with several players’ jerseys already available for sale.  The jerseys are blue with red stripes on the shoulders, with the numbers outlined in red, with the words “We are all Patriots” embroidered on the collar.

#Patriots in blue, Texans in white.

The team will also be wearing blue pants, giving them their first all-blue look since the 2002 season when they wore them in a loss to the Broncos at Gillette Stadium.  Hopefully, they have a little better luck this time around.

Herd Envisioning Brady in Dallas – We’re just getting started with Jimmy Garoppolo’s run as a starter and if what took place Sunday night continues, the amount of chatter about his future is going to cascade over like a waterfall and create a likely situation where some will begin to wonder about whether or not it makes sense to stick with the younger player and move on from Brady.

It will likely be much worse in the media and the whispers are already starting, with Colin Cowherd spending some time on Friday discussing the fact that he could see a desperate Dallas Cowboys franchise making a move to bring him to Dallas.

“If you wait until the very end, it’s too late,” said Cowherd.  “To get rid of a legendary quarterback, you have to let go of him while he still has wins, stats, and production left.”

Cowherd believes two years is the max Brady has left and he believes the Patriots should consider moving him in the next 1-2 years and stick with Garoppolo if the Patriots are confident that the former Eastern Illinois standout can be “the guy”.  Given Dallas’ issues, Cowherd believes it’s a “perfect” situation, giving him Dez Bryant for at least two years and an opportunity to get the Cowboys back to the Super Bowl.

Here’s the video of the segment for those who want to listen to it:

Bennett Earns Praise – Martellus Bennett wasn’t able to go out and have a big night after spending much of the game inside blocking at the line and keeping Chandler Jones away from Garoppolo. But on Tuesday Josh McDaniels talked about the veteran tight end, calling him “unselfish” after Bennett went out and did exactly what they needed as the Patriots won their first game of the season.

“Marty certainly did an excellent job the other night, ran behind them a lot in the running game,” said McDaniels during his conference call.  “He did a good job on the edge, we kept him in pass protection more than a handful of times and he did a nice job in terms of securing the edge of the pocket there too.”

Bennett finished with just 3 receptions on five targets, one of which came on third down.  Overall he looked more comfortable than he did during the preseason and watching him manhandle Jones was great to see as he’ll be a player who will definitely be able to help out in that role this season.

McDaniels was pleased with his performance and while he didn’t have a big night, McDaniels pointed out that what Bennett did went far beyond what showed up in the final totals.

“[He’s an] unselfish, team guy.  Just played hard on every snap, played a ton of snaps for us and really did his job. When he was asked to do whatever it was, he performed his responsibility and helped us in a number of different ways. That’s what our tight end positon generally does, and like I said, Marty was out there most of the time the other night and did a nice job of it. We gained a lot of production out of the things that he did, regardless of whether they showed up in the statistics or not.”

Gronkowski Could Be Out a Bit Longer – After sitting out week one, it looks like Rob Gronkowski might not be out on the field this week against the Dolphins either.

According to ESPN’s Adam Schefter, the veteran tight end could actually miss the first few games of 2016 as he continues dealing with a nagging hamstring injury that kept him from making the trip to Arizona after he was downgraded to “Out” prior to the contest.

Gronkowski suffered the injury during training camp and called himself “week to week” when he recently spoke to reporters, which raised a red flag after he said it and ended up being worth the concern when Gronk was unable to play on Sunday night.

With the long-term goal being to have Gronkowski healthy for the postseason, having him sit out now is certainly more preferable if it means he’ll be good to go by the time January gets here.  While it was great to see Garoppolo overcome injuries to lead the team to a win, it would definitely be a little easier if Gronkowski could be part of the mix as they get set to face what should be two tough opponents in Miami this week, as well as the Texans next week.

But for now they still have to try and win with whoever is out there, and hopefully, we see Gronkowski back in action in the not-too-distant future.

Patriots Bring In Players For a Workout, Release One – The team might have been off on Tuesday but the coaches were doing some due diligence on several players, with NESN.com reporting that the team worked out four players.

According to the report, those players included wide receiver Anthony Dable, guard Ian Silberman, as well as defensive ends Davis Tull and Ryan Russell.  They also released defensive back Mike Hilton from the practice squad.

Dobson Works out with the 49ers – Oddly enough after being released by the Patriots during final cuts, wide receiver Aaron Dobson hasn’t found a new home yet.

According to CSN Bay Area, the veteran receiver worked out for the 49ers on Tuesday, although no signing is believed to be imminent.  Dobson has reportedly also worked out for Philadelphia and the Jets but the former second-round pick hasn’t landed anywhere at this point.