6 years ago at 6:26 am ET
Follow @IanLogue
Posted Under: Uncategorized 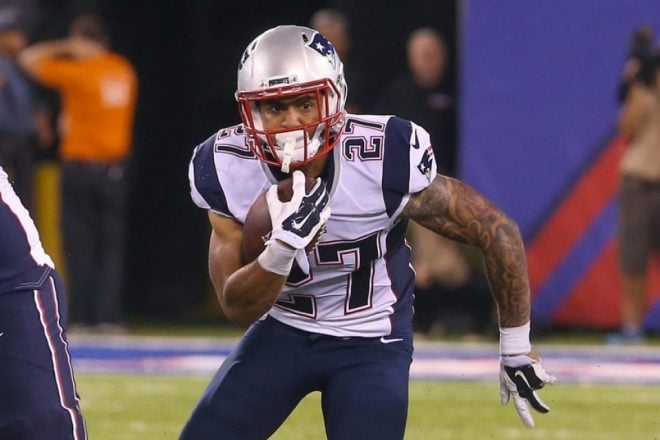 The Patriots finished the preseason 3-1 after a loss to the Giants on Thursday night, but there were certainly some bright spots and here’s a look at six players who will likely receive some praise in the film room after the game.

Barkevious Mingo – Wearing #51 sets the bar pretty high and Mingo often times Thursday night resembled the man who last wore that number, looking an awful lot like Jerod Mayo out there on the field with the way he played.

Mingo had a brilliant night, totaling six tackles including one tackle for a loss and two quarterback hits.  He showed some terrific power and quickness as he exploded through the line on multiple occasions and spent quite a bit of time wreaking havoc in the Giants’ backfield.  The Patriots moved him around quite a bit Thursday night and it’s amazing to see how Belichick has taken yet another player who wasn’t a star with his former team and brought out the best in him here.

While it’s just one game, if it’s any indication of the type of season he’s going to have, Mingo certainly looks like a player who should be fun to watch this season in a defense that really came together quite well over their four games.

Justin Coleman – After not being a very deep group for several years, it’s amazing to see the development of New England’s secondary and Coleman falls into the category of a player who really has shown a lot of growth and continues to improve.

Coleman played well Thursday night, including making a key play toward the end of the first quarter that helped give the Patriots some momentum. On a four yard run by Giants running back Paul Perkins, Coleman put a big hit on Perkins as he put his shoulder on the football and knocked the ball loose, which gave the Patriots the football.

From there the Patriots put together a 9 play, 67 yard drive that ended in Tom Brady’s touchdown to Keshawn Martin, which at the time gave the Patriots a 6-0 lead.  Overall Coleman finished the night with four tackles but he was great in coverage and looks like he’s poised to have a strong season in 2016.

Kamu Grugier-Hill – The best way to make a team is to show up on special teams and Grugier-Hill definitely did that Thursday night.

The rookie made his presence felt in the fourth quarter when he delivered an absolutely brutal hit on New York’s Bobby Rainey on a punt return that made everyone in MetLife stadium audibly gasp as the linebacker completely drilled him before jumping up and running off the field.

That’s exactly the type of impression that a player can hope to make, and that’s a play on film that will certainly strengthen his case to edge out another player as the team begins making some tough decisions this weekend.

Cyrus Jones – While Jones had a tough night in coverage, it wasn’t all bad for the rookie defensive back.

Jones gave up a 59-yard touchdown after getting beaten on a slant on the inside after Tavarres King simply made a great play and Jones was just simply not quick enough to get to King before he blew past him.  To make matters worse, the rookie cornerback didn’t get help over the top from the safety position as King outran everybody for the touchdown.

But Jones continued to excel in the punt return game, with a 34-yard return in the fourth quarter where he showed some nice elusiveness at some moments where it looked like he might be brought down.  He’s been excellent in that role all preseason and that continued Thursday night against the Giants.  Given the injuries both Julian Edelman and Danny Amendola are each coming off of, Jones has been one of the biggest bright spots over four games and the fact he’s stepped up in the return game couldn’t have come at a better time for New England. 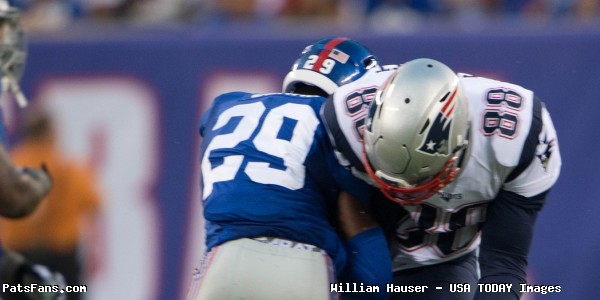 Clay Harbor has struggled this presason and A.J. Derby may edge him out. (USA TODAY Images)


D.J. Foster – Foster had one of his best performances of the preseason, and thanks to the injury suffered by Tyler Gaffney, may have also put himself in position to earn a roster spot.  Foster finished with a team-leading 9 carries for 22 yards, as well as a team-high 9 receptions for 110 yards, making him the only player to break the 100-yard receiving mark of the preseason.

It wasn’t all pretty for Foster, who committed the sin of all sins by turning the ball over down in the red zone, having the ball knocked out of his hands by Giants linebacker Mark Herzlich in the second quarter, which the Giants recovered.  That cost the Patriots points, but Bill Belichick was spotted after the play talking to Foster about the turnover, which was one of the more interesting moments of the night in seeing how the Patriots coach handled the young running back after that mistake.

While it wasn’t perfect, Foster certainly showed enough for the coaching staff to likely want to see more and it wouldn’t be a surprise if he sticks depending on how bad Gaffney is hurt (he was spotted in the locker room after the game with his foot wrapped).

A.J. Derby – Derby may go down as one of the more intriguing stories of camp in that he’s absolutely hustled and outworked Clay Harbor to earn a spot behind Rob Gronkowski and Martellus Bennett as the Patriots number three tight end on this roster.

Derby caught five more passes Thursday night, giving him a team-leading 15 catches on the preseason for 189 yards while averaging 12.6 yards per receptions.  Derby was just a fun player to watch this preseason, showing a tremendous amount of quickness and athleticism, including a play on Thursday night where he hurdled a defender after making a reception.

Belichick loves athletic tight ends that are tough, hard-nosed players who consistently make plays.  Like Foster, it hasn’t all been pretty, but Derby has shown more than enough for Bill Belichick to have a hard time letting him go.  While Harbor has the experience and the resume, Derby seems to have some intangibles that will likely help him when the Belichick and the coaches begin building their roster.