Belichick Calls Brady, “the Greatest Ever”:
Bill Belichick was the guest speaker this week at the 2016 Salesforce World Tour in Boston and shared his thoughts on QB Tom Brady as the “greatest QB of all time” during a question and answer session.

“He’s been just a tremendous leader and tremendous player for our organization,” Belichick said.

The duo, who have been together for the past 16 seasons, bring out the best in one another and share the same philosophies about football which has made their relationship one of the strongest in the sport.

Belichick spoke about the mindset in New England and what the team looks for in its players.

“If you like football, and you like to come in and work on football, then the New England Patriots is a great place to be,” Belichick said. “If you don’t, if it’s a job, if you’d rather be doing something else, honestly you’d be better off with another team.

“I think it starts there — a love of the game, the passion for the game, a passion to be part of a team, be part of a group, be part of a commitment to perform at a high level, and be unselfish and to give up some of your own personal goals and desires for the good of the team for the opportunity to be part of something special in a team environment. I think those are the things that help us.”

Belichick spoke about being an ‘outlier’ in the sport stating that when he arrived as Patriots coach in 2000, only the Patriots and Steelers were running the 3-4 defense. But by 2005, after the Patriots had won three Super Bowls and the Steelers one, half the league was playing the 3-4 defense, making it much more difficult to find the players to fit in the system.

And while Belichick rarely is one to mince words, look for the Patriots to buck the system again…and soon. A look at the team that is just in the infancy stages of development here in early April looks like the Patriots are getting away from the smaller faster teams that everyone is building and going to a bigger, more physical unit. Stay tuned.

Kuhn Signing and the ‘German connection’, a Third Perhaps:
The Patriots signed former Giants DT Markus Kuhn to a contract this week adding depth and size to the interior defensive line.

The 6’4, 303-pound defensive tackle was a 7th round draft pick from North Carolina State for the Giants in 2012. He has notched 48 tackles, 1.5 sacks and two fumble recoveries in his NFL career.

His signing brings the second German-born player to the roster, the other being OT Sebastian Vollmer which could bring some interesting trash talking in training camp when the two face off against one another. “Du darfst nicht passieren!“

One has to wonder now if the Patriots could be the landing spot for a third German-born player, wide receiver Moritz Boehringer, a 6-foot-4, 227-pound wide receiver from Florida Atlantic University running a 40-yard dash time (on grass) at 4.38.

Boehringer also posted a vertical jump of 39 inches, a broad jump of 10 feet, 11 inches and a three-cone time of 6.65 seconds. While his level of competition in the German league isn’t up to US college standards, his measurable are outstanding. “Wie geht’s?”

Preseason Schedule Brings Familiar Foes, Joint Practice?
With the Patriots preseason schedule being released the team will face four teams from the NFC, with two of their opponents being familiar foes in the preseason.

The Patriots open up with the New Orleans Saints and the chances are excellent that the two teams that have conducted joint practices in the past will do so again. There is a lot of respect between the two teams and head coaches and we look forward to seeing the Saints once again joining the Pats for a couple of practices prior to the preseason kicking off.

The Bears will visit for the second home preseason game and with the teams doing a lot of player swapping the past few years it promises to be an interesting matchup with Martellus Bennett, Shane McClellin, Jon Bostic and Brock Vereen facing their old teams.

The Pats finish up on the road in Weeks 3-4 with away games in Carolina and New Jersey to take on the New York Giants. This will be the 12th season in a row facing the G-men in the preseason finale, but the first in many years with Tom Coughlin at the helm. 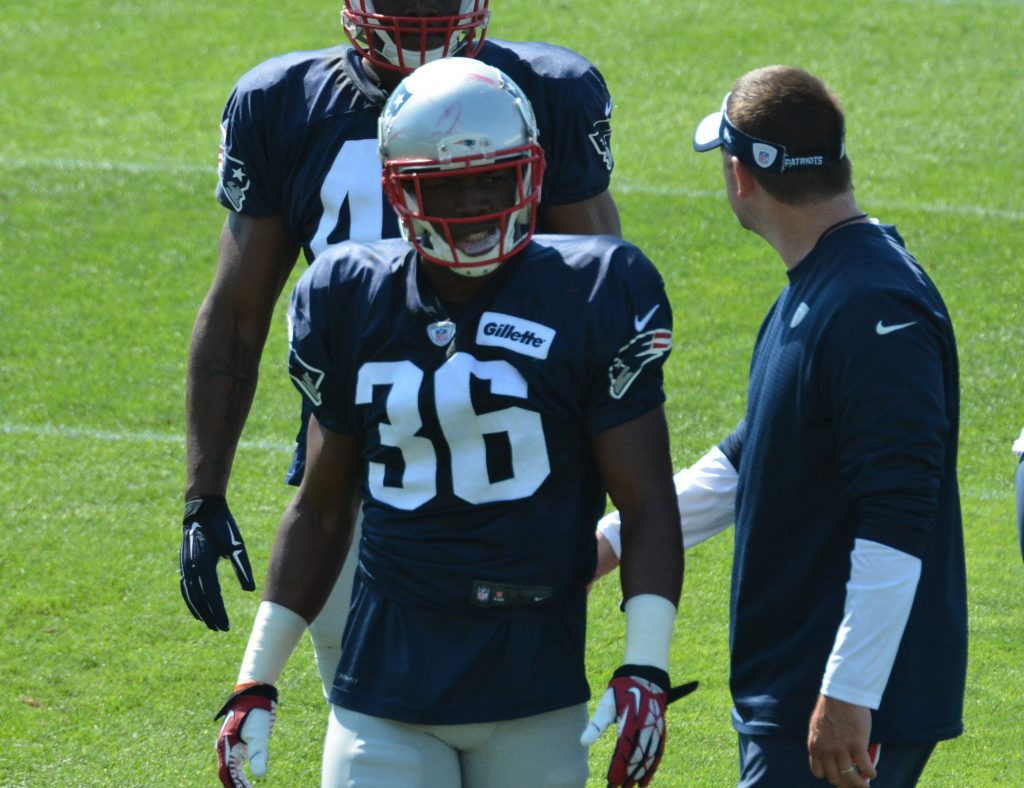 Brandon King Signing Solidifying Solid STs:
The Patriots announced this week that S/LB/ST 2nd year player Brandon King had signed his free agent tender and will be re-joining the team in 2016.

Although the signing was merely a formality and it was expected, it was good news as King stepped up big for the team after being signed to the active roster from the practice squad in Week 4. He played in 12 games and was second on the team in STs tackles with 12, finishing behind only Matthew Slater with 17.

We watched King all through training camp last year and he continually got a lot of 1-on-1 work with STs’ coach Joe Judge and liked his chances of making the team despite being a long shot.

Knighton, Cannon, Branch Face Weigh-ins:
Newly signed DL Terrance Knighton has a weight clause in his contract and according to the veteran, he isn’t worried about making weight.

Knighton who weighed a reported 354 pounds for the Redskins in 2015 has already met with Patriots team nutritionist Ted Harper and he and the team plan on monitoring his playing weight in 2016.

Knighton appeared with former Pat Vince Wilfork at Aqib Talib’s wedding recently and looked a lot slimmer than a year ago. The Patriots also have DL Alan Branch and OL Marcus Cannon on similar programs where they must monitor their weight as well.

Having been using the Mock Draft simulator of Fanspeak.com s couple of time this spring, the one thing that keeps coming up, many of the best players in each category will be gone by the time the Patriots pick at #60.

However, there do seem to be more top tier running backs still available at the bottom of the 2nd round than tackles as the pool for them seems to be drying up quicker. So if they want one of the better tackles in the market, they may be looking to move up earlier in the 2nd round.

Dolphins Claim Ekpre-Olomu On Waivers from Cleveland:
The Dolphins claimed cornerback Ifo Ekpre-Olomu via waivers this week after he was cut by the Cleveland Browns, who drafted him in the seventh round in the 2015 NFL Draft.

The 5-foot-9, 195-pound Ekpre Olomu was projected to be a first-round pick before he injured his knee with Oregon just prior to the national championship game against Ohio State.

Miami is looking for CB help after releasing former Pro-Bowl corner Brent Grimes this spring. They did trade for Eagles CB Byron Maxwell but are expected to look to this season’s draft to augment the position and are rumored to looking at Houston CB William Jackson III with the 13th pick.

In a Surprise Move, Jets LT Ferguson Retires:
Jets left tackle D’Brickashaw Ferguson, a former Pro Bowl player known for his remarkable durability, and consistency retired Friday at age 32. The move was unexpected and caught the Jets by surprise with the draft just around the corner.

“As I considered the words I would say to you, I recognize a simple truth: It just isn’t easy saying goodbye,” Ferguson said in a note on the team’s website. “Today we celebrate a different type of moment, one that marks the completion of a journey versus the start of one. Today marks my retirement from the NFL as a professional football player.”

Drafted by the Jets in the 1st round with the No. 4 overall pick in 2006 NFL Draft, Ferguson didn’t miss a game in 10 NFL seasons, with 167 consecutive starts, including the playoffs. His durability was such that he never missed a practice and never appeared on an injury report.

Ferguson’s retirement frees up around $9 million dollars in cap room for the cash-starved Jets who prior to this had less than a million in salary cap space. The Jets approached Ferguson last week about taking a pay cut from what was supposed to be $14.9 million-dollar cap hit in 2016.

The Jets reportedly will explore options in the draft but are also looking at a possible trade with Denver for tackle Ryan Clady as well.
**Update**  On Saturday evening according to Adam Schefter from ESPN, the Jets completed a trade for Clady and Denver’s 7th Round pick for the Jets 5th Round pick.

“After months of introspection, I am retiring from football,” Tarpley, wrote on his Instagram account on Wednesday.

“I suffered the 3rd and 4th concussions of my career this past season and I am walking away from the game I love to preserve my future health.”

Tarpley appeared in 14 games with two starts after signing as an UDFA from Stanford, recording five tackles, two interceptions, one sack and a forced fumble.

The 6’0, 233-pound linebacker is just 23-years old. “This decision is the hardest I’ve made yet but after much research and contemplation I believe it’s what is best for me going forward.”