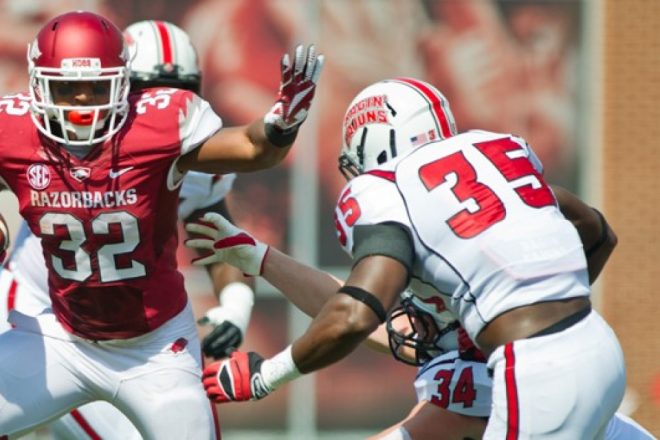 After missing 2015 because of an injury, Jonathan Williams may be a target for the Pats in the NFL Draft

The Patriots may still target a running back in the 2016 NFL Draft. Even though they have signed former Colt and Charger Donald Brown, they don’t really have a reliable power runner that can punish defenders and carry the ball between the tackles. Brown has had some degree of success in the passing game, as had Dion Lewis and James White but the Pats need a consistent ground gainer that can take advantage of the New England power blocking scheme. Brandon Bolden is mainly a special teams’ maven and Tyler Gaffney is still looking to get on the field in Year 3.

The Patriots haven’t drafted many running backs in the Belichick era (8 to be exact), but with the apparent need, especially late in the season with the injuries piling up, this may be a time to strike in the draft.

Jonathan Williams from Arkansas is a power back that fits the Patriots needs perfectly. Powerfully built at 5’11, 220, he has quick feet to avoid tacklers but is at his best when running north-south. Prior to his injury in August that caused him to miss the entire season, he had a very solid 2014 season. Running in the tough SEC, Williams averaged 91.5 yards per game and 5.6 yards per carry for the Razorbacks.

The Patriots drafted his former teammates Trey Flowers and A.J Derby last season so there is a bit of a pipeline to Arkansas recently for the Patriots.

In 2014 he forced 44 missed tackles and has very little tread worn off of his tires, having only 406 touches while a member of the Razorbacks. His instincts are good, knowing when to follow his blockers thru the hole and when to accelerate.

–  Soft hands out of the backfield and good in pass protection

– Very good in short yardage situations, will move the sticks

– Has good but not great speed

What his Role Will Be:
His role in the New England offense would be similar to what LaGarrette Blount’s was the past few years. He is a powerful back that can run between the tackles and keep the chains moving. He can contribute in the passing game a bit but is a willing and effective blocker in pass protection.

Will his Role Change from Year 1-2?
Yes, with more work on his receiving skills he could become a bigger target in the passing game

What Current Player on the Roster Will He Replace?
Free agent LaGarrette Blount

What is his ST Value?
Minimal

Conclusion:
Had Williams not suffered an injury in August, he would be one of the bigger targets in the draft this April. Now he may find his draft stock falling due to real concerns when teams at the Combine look at his medicals. He is reportedly close to 100 percent so teams will be looking hard but possibly cautious in their approach with him.

That may work perfectly in the Patriots favor. If he’s still around when they pick in Round 3, he may prove too good of an opportunity to pass up.

Williams is, for a bigger back a bit of a slasher. Not only can he make the yards between the tackles and pick up the short yardage gains, he can move the sticks to keep drives alive. This is an area where the Patriots offense faltered down the stretch and their inability to run the ball effectively cost them home field advantage and ultimately the AFC Championship Game against Denver.

They can’t afford to be one-dimensional in 2016, Williams brings the power to keep defenses honest and re-ignite the running game while still offering a bit in the passing game and providing good pass protection for Brady.

He projects in the Patriots system to be a Starter on Day 1.