7 years ago at 8:45 am ET
Follow @SteveB7SFG
Posted Under: Patriots Commentary 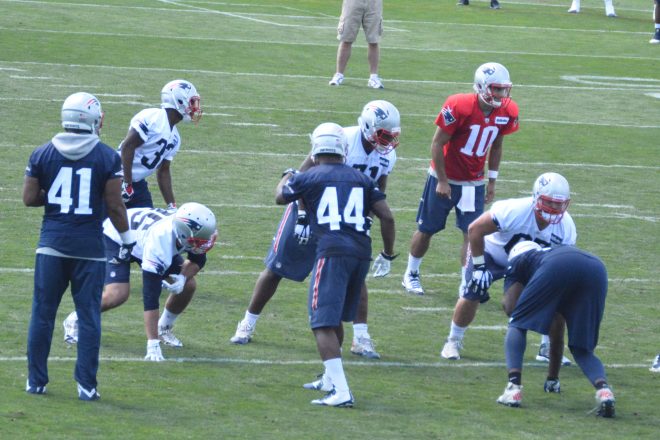 The Patriots have a couple of decisions to make in regard to free agents this off-season, but they are mainly to do with their role players and not with the starters like last year or the upcoming 2017 season.

One of their free agent signings this offseason and a player who spent three different stints with the team in 2015 was linebacker Dekoda Watson.

Watson spent time with the Bucs, Jaguars and Cowboys before being signed by the Patriots in May of 2015 bringing the roster to the 90-man limit at that time. He was originally drafted by the Bucs in the 7th round of the 2010 NFL Draft with the 217th pick from Florida State.

He was released at the end of training camp, signed in mid-September, released again a few weeks later and was re-signed in December and played well down the stretch for the Patriots. He kept in shape and was ready once he got the call to come back.

His best season came in 2013 with Tampa Bay where he produced 42 tackles, two sacks, one interception, one forced fumble, one fumble recovery, one pass defensed, three tackles for loss and one blocked kick. He’s a fast, disruptive linebacker who can be a liability in coverage against running backs.

He ended up with New England after undergoing double groin surgery which slowed his 2014 progress and eventually was the call for his release from Jacksonville and Dallas. “I came off the surgery and they were expecting something more once I came back and it kind of lingered a little bit,” Watson told the media at the time. “Once I was at my peak, I was able to play against Dallas and I played with high energy, I felt good about it and I came with a lot of confidence.”

The 6’2, 240-pound linebacker is slightly undersized but runs with good speed, logging a 4.55 in the 40-yard dash at the NFL Combine. And despite his stature, he’s a physical downhill player, a good tackler and plays off blocks pretty well.

He can blitz off the edge and has a good initial burst. Watson also has good play recognition and has a quick reaction time. During the AFC Divisional Round against Kansas City, when Chandler Jones left with an injury, Watson filled in at defensive end. “Dekoda gave us some good rushes there on the edge,” Bill Belichick said after the game.

Given his versatility, besides filling in for Jones at defensive end, he can play either the SAM or WILL linebacker positions and is a core special teamer. He sprung Danny Amendola for a big punt return against the Chiefs.

“It’s great to be back,” Watson said to Phil Perry of CSNNE. “It’s great to be back in this environment. It’s not necessarily the football part of it, but just the camaraderie with the players, just seeing old friends and things like that. Being able to just sit in a meeting room is a blessing.”

“People don’t understand that. Just to be able to do things like that, it’s the small things. To come back, they show you love, everybody’s excited to see you and things like that. There’s just some things that you’ll never be able to take away when it comes to football. It’s just good. It’s a great blessing. A great opportunity.”

Why Watson Will Return: Watson is the kind of versatile depth player that Bill Belichick loves to fill the bottom of the roster with. He can play WILL/SAM linebacker positions and as he showed in the playoffs, can even jump in at defensive end.

He’s always been known as a good special team player and that aspect of his game served him and the team well against the Chiefs. The Patriots need depth at linebacker after starters Jamie Collins and Dont’a Hightower especially with the uncertain return of Jerod Mayo given his three successive years of major injury and his $11 million-dollar cap hit in 2016.If he is resigned, he’ll join Jonathan Freeny, Jon Bostic and Darius Fleming as the team’s depth players.

Watson won’t break the bank and he can be signed pretty inexpensively. He has got good speed and is still relatively young, turning just 28 on March 3.

Why Watson Won’t Return: The Patriots may look to get younger and get another bigger run stuffer in the draft already having Fleming and Freeny on the squad. When Hightower went down with an injury, Mayo filled in but has been slowed by injuries and the run defense suffered. The team lacked that big, physical presence inside.

Bottom Line:  The money will drive the train here in relation to his coming back, if he wants too much money, which isn’t likely, the Patriots would most likely pass.

If they can come to a modest salary cap hit there is no reason to believe that the Patriots wouldn’t entertain at least the possibility of Watson trying to earn a roster spot in training camp. Speaking of which, the biggest impression we remember of Watson during last year’s camp was of him wearing a hoodie under his uniform on those sweltering late July and early August days.

Watson is a versatile and speedy linebacker who can be a core special teamer. He won’t be a star, but the back end of the Patriots roster is always chock full of guys like him that have a role and do it well. Jonathan Casillas from the 2014 Super Bowl winning team comes immediately to mind. Watson fits that role to a tee.

For that reason and the fact that he already is very familiar with the system, I’d say there is a 70 percent chance that the Patriots resign him and bring him back in 2016.