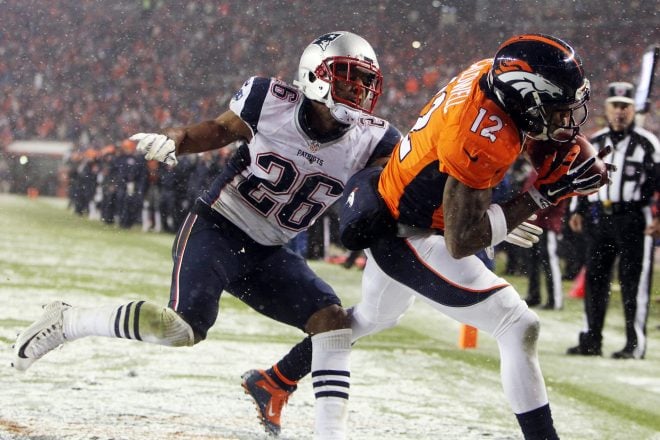 The Patriots travel out to the Mile High City in Denver to take on a familiar opponent, the Broncos in the AFC Championship Game for the second time in three years. Both teams won in the AFC’s Divisional Round while at home.

The Broncos came back from a 4th quarter deficit with 11 points in the final four minutes to beat the Pittsburgh Steelers 23-16 on Sunday evening. Capitalizing on a recovered fumble where it looked like the Steelers were about to put the game away, they drove for a go-ahead touchdown and then added a field goal after the Steelers turned the ball over on downs.

The Patriots beat the Kansas City Chiefs in Foxboro 27-20 as Tom Brady threw for 302 yards and two touchdowns breaking KC’s 11-game winning streak. New England took the opening drive and drove for a touchdown in the game’s first four minutes and never looked back. And forcing them to play from behind was instrumental in the Pats success. Kansas City during their entire 11-game winning streak, trailed for a total of nine minutes

The game is scheduled for 3:30 p.m. and will be televised by CBS and will have their announcing crew of Jim Nantz and Phil Simms on the call. It will also be carried by the Patriots flagship radio station 98.5 FM the SportsHub with Bob Socci and Scott Zolak.

An interesting tidbit about tickets for this week’s game comes from the Denver Post: Tickets for the AFC championship game between the Denver Broncos and the New England Patriots game will go sale to the general public at noon Monday, the Broncos announced Sunday. …

Tickets will only be sold to those with a billing address in the Rocky Mountain region, including Colorado, Montana, Nebraska, New Mexico, South Dakota, Utah, western Kansas and Wyoming. Sounds like the good folks in Denver are worried at seeing a ton of Patriots fans for the game.

Here are our five first impressions of the Broncos:

Forget the Hype or Ignore the Noise in this one: The mainstream media is falling all over themselves in trying to make this “Brady vs Manning XVII” or some other nonsense. As if the question is still an open one…that book was closed long ago.

Manning is a complimentary piece now and the offense no longer revolves around him airing it out 40-45 times a game. If truth be told, Bill Belichick and the Patriots would love nothing more than to force Manning into HAVING TO throw all game long. That is a game the Patriots would feel they would be best served to win.

The legacy pieces for Manning were already well into play on Sunday as the lead-in to the Divisional Game was less about Pittsburgh and Denver and more about hailing the conquering hero. Since Saturday, think back how many times you’ve heard, “With a win on Sunday, Tom Brady will have the opportunity to win back-to-back Super Bowls.” In fact, no one has done it since…Brady did in 2003 and 2004. And we haven’t heard it in the mainstream …once.

We have seen from multiple sources that Monday was the 1-year anniversary for Deflategate. One thing you won’t hear on Sunday that it will be 30-day anniversary of the HGH story released by Al Jazeera that Manning played a part in, especially from his buddy Nantz at CBS.

But back to Manning, his arm even in the near 50 degree temps on Sunday still struggled to hit those outside throws with any velocity. Good news for Denver has the extended weather forecast at being near 50 again on Sunday. Manning remains a very smart signal caller and has the experience to recognize a lot of pre-snap reads that can lead to an audible at the line.

This isn’t “Brady vs Manning XVII” but Brady vs the Denver defense. More to that in a bit…

Forget the regular season numbers, Denver is a running team now: The Broncos were a poor running team until Manning was sat down and Brock Osweiler brought in. That brought wholesale changes to their formations and the commitment to running the ball that has paid dividends.

While the Broncos averaged 107.4 yards rushing per game on the season, those numbers were much better in the second half of the season. During six of the last seven games Denver has rushed for more than 100 yards. During the final seven games the Broncos averaged an impressive 134.8 yards per game on the ground. If not for the Oakland game where they were stymied for just 34, that number would have been 151.6.

Coach Gary Kubiak’s zone blocking scheme along with running backs Ronnie Hillman and C.J. Anderson have excelled for Denver down the stretch. This will be a key area to monitor as the game moves closer.

During the first meeting prior to Dont’a Hightower going down with an injury, Denver rushed 15 times for just 43 yards, a 2.9-yard average per rush attempt. After Hightower went out Denver rushed 15 more times for 132 yards, an 8.8-yard average per rushing attempt with three touchdowns including Anderson’s 48-yard scamper in OT. The big Patriots linebacker will be a key cog in stopping the run this week.

Denver’s Defense Will Look Different with Ware on Sunday: Missing in the first matchup between the two teams was bookend pass rusher DeMarcus Ware who was out with a back ailment. He and Von Miller led the Broncos pass with 7.5 and 11 sacks respectively as the team was tops in the NFL in that category with 52.

They also get a good push from interior DL Derek Wolfe who notched 5.5 sacks of his own in just 12 games this season. Wolfe was suspended for the first four games of the year for violating the league’s rules policy on performance enhancing drugs and then parlayed that into a four-year contract extension worth $36 million with $17 million guaranteed. Money well spent.

Denver had the fourth overall defense in terms of points allowed with 18.5 in 2015, was third best against the run allowing only 83.6 yards per game but was #1 in terms of total yards (283.1) and Yard passing (199.6). Wade Phillips unit has been the cornerstone of this team all season.

The secondary is deep and active, led by Chris Harris, Aqib Talib as well as safety T.J. Ward, the hard-hitting presence who plays right up to and many times over the line. While they didn’t generate a ton of interceptions, the secondary has the ability to blanket opponents and shut them down, coupled with their pass rush.

Special Teams Was a Big Factor in Win Over Pittsburgh: While many will point to, and rightfully so as the Steelers fumble as the turning point in that game Sunday, the Broncos STs delivers a large share of the credit as does the failure of Pittsburgh’s for keeping that game close.

Kicker Brandon McManus single-handedly kept the Broncos in the game with four field goals and later put the game away with a fifth. He was all the scoring the Broncos would get for 23 consecutive playoff drives until the late touchdown on Sunday. While the Steelers punting unit couldn’t deal with the gusty winds blowing in Mile High, Britton Colquitt had no such issue and won the battle of field position easily.

Denver’s coverage units are very solid and their punt coverage team allows only a 6.1-yard average. Who can’t forget the muffed punt by the Patriots’ Chris Harper in November that Denver was right on top of and it turned a 21-7 Patriots lead into an eventual loss.

Their punt returners Emmanuel Sanders as well as Omar Bolden are dangerous. Bolden gashed the Steelers for a 42-yard punt return on Sunday that led to a field goal. But he hurt his knee on Sunday and may not be available for Sunday’s game. The Patriots STs will have their hands full on Sunday.

Broncos Solidify Offensive Line Just in Time for Playoffs: Denver much like New England has had injuries to their offensive line. They’ve had to mix and match with their backups and the results weren’t always the best.

But on Sunday the debate as to who would start for the Broncos at right tackle was answered…and emphatically as Michael Scoffield not only started but played all 74 offensive snaps against the Steelers. While he got flagged for one holding call, he was solid in the game and did a good job in the running game.

Left guard Evan Matthis who was hurt and coming off the bench down the stretch for the last three games of the season, also started and played all 74 offensive snaps. But a question that does remain is where is Vernon Davis?

The tight end who John Elway traded for has had issues learning the offense and played in just 11 snaps during the final two regular season games. Against Pittsburgh, Davis played only a single snap signaling that he is now the third TE on the depth chart behind Owen Daniels and Virgil Green. While there’s still a chance that we’d see Davis against New England, it seems that this move was one of those low-risk, high-reward moves that just didn’t pan out.

By: Ian Logue
When it comes to Green Bay Packers quarterback Aaron Rodgers, there's something about facing Bill Belichick that seems to bring out the worst in him.
60 mins ago

By: Ian Logue
The New England Patriots are apparently looking to add a little depth at linebacker, and it looks like they'll be bringing back a familiar face…
2 hours ago

By: Mark Morse
Shame that such a strong effort ends up with the Patriots coming up short.
4 hours ago

By: Ian Logue
The Patriots' overtime loss to the Packers is yet another one we can add to the list of games that got away this season.
17 hours ago

By: Bob George
Your record says who you are. Usually. The Patriots stand at 1-3 after four weeks, which is better than the 0-4 many experts predicted (or…
19 hours ago