6 years ago at 8:52 am ET
Follow @IanLogue
Posted Under: Patriots News 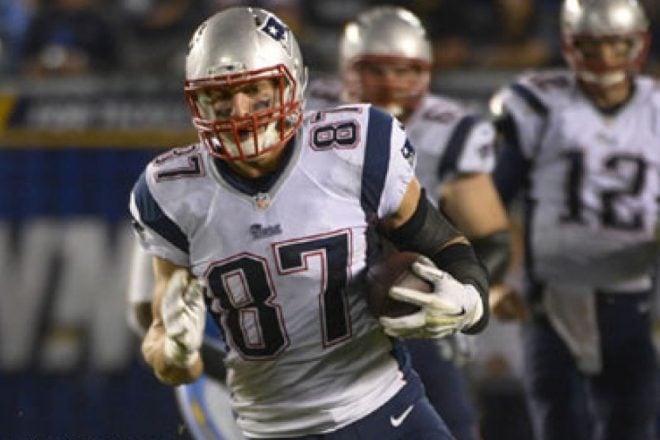 Of all the injuries the Patriots have been dealing with this season, they caught a major break in Week 12 when Rob Gronkowski took a direct hit on his knee out in Denver, which saw him get carted off the field following the injury.

Fortunately the injury ended up only being a ‘deep bruise’ and wasn’t season-ending, which caused everyone in New England to breathe a sigh of relief after already having lost Julian Edelman weeks earlier against the Giants.

The injury kept Gronkowski sidelined the following week during the team’s loss to Philadelphia but was his lone absence, and he was back in action one week later and started against Houston, catching four passes on four targets including a touchdown.

However, Week 15 saw him re-aggravate the injury against Tennessee, and following that game he didn’t quite look like himself during the team’s final two regular season contests.

That was reportedly why the team held him out of practice during their one full-pads session on Tuesday and according to Jeff Howe of the Boston Herald, it’s also the reason he was limited during Wednesday’s session.

As he showed in 2014, the more healthy he is, the better the Patriots’ chances are in the playoffs.  Gronkowski caught 16 passes for 204 yards and three touchdowns during the postseason last year, including one in each of their three wins en-route to their fourth Super Bowl championship.  With Julian Edelman set to return, the Patriots offense should be able to open things up a little more now that they’re about to have everyone back together, but Gronkowski is clearly a big key to their success.  He’s one of New England’s most important weapons on third down, having caught 16 receptions for the Patriots this season, with 11 first downs.

The good news is, barring any setbacks, the injury likely won’t keep him out Saturday as Gronkowski is expected to be out there when New England hosts the Kansas City Chiefs in the AFC Divisional playoff round at Gillette Stadium.