7 years ago at 9:29 am ET
Follow @IanLogue
Posted Under: Patriots Commentary 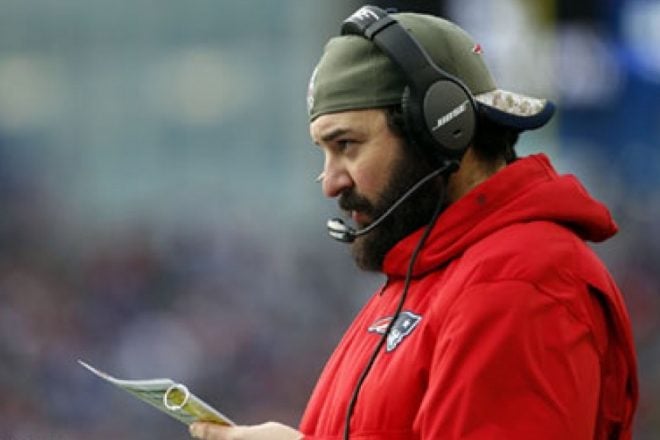 One of the problems with a team having success is the fact that it creates envy with other teams around the league, and the bad news is they generally want what that team has, even if it means their players or their coaches.

McDaniels already has experience as a head coach during his time in Denver after replacing Mike Shanahan in 2009, which ultimately blew up in a messy situation that resulted in his firing one season later. He came back to New England during the team’s Super Bowl run in 2011 as an offensive assistant, and he took over as offensive coordinator after Bill O’Brien departed for Penn State. McDaniels has long been believed by some as the likely successor to Bill Belichick someday when the future Hall of Fame coach elects to call it quits, but the team’s championship run last season and incredible 12-4 finish this year despite all their injuries has him back in the radar of teams like Miami who are in dire need of some stability.

Meanwhile, the interest in Patricia is well-deserved given his resume and the type of person he is. After joining the Patriots as an offensive coaching assistant in 2004, he’s worked his way up the ranks. After calling plays following the departure of former defensive coordinator Dean Pees after the 2009 season, he finally received the title of defensive coordinator in 2012 and has been terrific, and was a big reason why the Patriots beat Seattle last year.

Belichick obviously holds Patricia in high-regard and had high praise for him back in November, expressing how intelligent he is, along with his admiration of the fact that Patricia’s earned everything he’s gotten to this point.

“Matt’s really smart. This guy can probably build a plane and fly it,” Belichick said. “This guy’s smart-smart… He’s had a lot of different experiences… been in this program a long time… he’s got great recall, really high IQ level in terms of just processing a lot of information.”

“He’s a blue-collar guy, you know, certainly wasn’t born with a silver spoon, like most players,” Belichick added. “He’s worked for everything, worked his way up. He has an appreciation for that, and relates to other guys doing the same thing.”

The only problem for the Patriots might be that all that hard work may see him end up on an opposing sideline as a head coach.

READ NEXT:
Gostkowski Among Only Five Kickers Perfect in Extra Points in 2015
Posted Under: Patriots Commentary