1) Looking at the NFL standings after fourteen weeks, just 5 teams out of 32 currently have double-digit wins at this point in the season.  Right now it’s just New England (11-2), Cincinnati (10-3), Denver (10-3), Carolina (13-0) and Arizona (11-2) who have won 10 or more games and the strange thing is, it just doesn’t seem right looking at the teams who have a shot at going to the playoffs without a winning record.  The NFC East is the one that stands out the most with the Redskins (6-7), Eagles (6-7) and Giants (5-7) all still in the mix for that division, while the AFC South has Houston (6-7), Indianapolis (6-7) and Jacksonville (5-8) battling it out.  Jacksonville is the most interesting after they’ve started to turn things on after blowing out the Colts 51-16 Sunday and it’s hard to believe that they even have a shot after the season they’ve had.  But it just goes to show how bad that division is and it brings back memories of 2008 when 11-5 couldn’t get New England into the postseason, yet this season a slew of teams that shouldn’t be playing in January, will be.

2) Coming off of Sunday’s win over the Falcons, if there’s any chance the Panthers will have their unbeaten season spoiled, it’s going to need to happen this coming weekend when Carolina heads down to MetLife Stadium to take on the Giants.  The Giants seem to be the only ones left on Carolina’s schedule capable of knocking them off.  If not, the Panthers will likely be the team that will join the 2007 Patriots as one of the only teams in NFL history to complete a regular season unbeaten.  Carolina made it look easy after blowing out Atlanta 38-0 on Sunday, with Cam Newton missing just six passes after finishing 15-of-20 for 265 yards and three touchdowns.  They’re playing extremely well right now and unless the Giants hand them a loss, the rest of their road is pretty easy. They finish the year with a chance to go down and embarrass Atlanta again the following week, followed by a home game against a Buccaneers team that has made progress but probably won’t be able to stop them.  The biggest task will then be trying to win in the postseason and if they advance to Santa Clara, it will be interesting to see how things play out, especially if they face New England.  Patriots fans know all to well what it’s like to lose a perfect season in that fashion and it would certainly be poetic should the two end up facing each other in February. 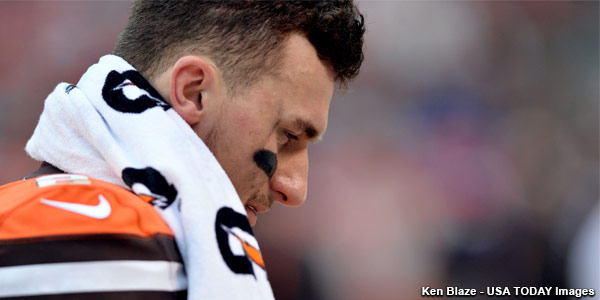 Johnny Manziel continues to be a head case for the Browns in Cleveland. (USA TODAY Images)

4) Out in Cleveland Johnny Manziel lead the Browns to their third win of the season, but not without making it interesting.  The embattled quarterback threw a first half interception that lead to another comical moment with a player who certainly doesn’t need any more drama than he’s already had.  After the turnover Manziel stormed off the field and slammed his helmet to the ground and it got better from there.  After reviewing the play and realizing he had another player come open on the play, he repeatedly smashed the tablet up against his head.  “I probably shouldn’t have overreacted the way I did, ” Manziel said after the game.  “But it’s the NFL and when those chances are there, you’ve got to make the most of them.”  It’s been a tough year for the 3-10 Browns but if nothing else, it certainly hasn’t been boring.

5) Sunday’s loss by the Chargers out in Kansas City was tough if you’re a fan of former Patriots running back Danny Woodhead.  The Chargers put themselves in position to tie the score in the closing seconds after getting down to the Chiefs’ 1-yard line with 0:16 to go in the game.  But the Chargers couldn’t stay poised following back-to-back penalties, a delay of game penalty along with a false start, both of which pushed them back to the Chiefs 11-yard line.  On the final play of the game, Rivers had Woodhead open in the back of the end zone on what would have been a tough catch, but he couldn’t quite hold on and time expired.  The win by the Chiefs marked their seventh-straight victory, improving them to 8-5 on the season while the Chargers fell to 3-10.  Kansas City had seemed like they were left for dead after a 1-5 start but they’ve turned it around and they’re suddenly a team to keep an eye on among teams that could end up being in the mix against New England in January.