7 years ago at 6:09 am ET
Follow @SteveB7SFG
Posted Under: Patriots Commentary 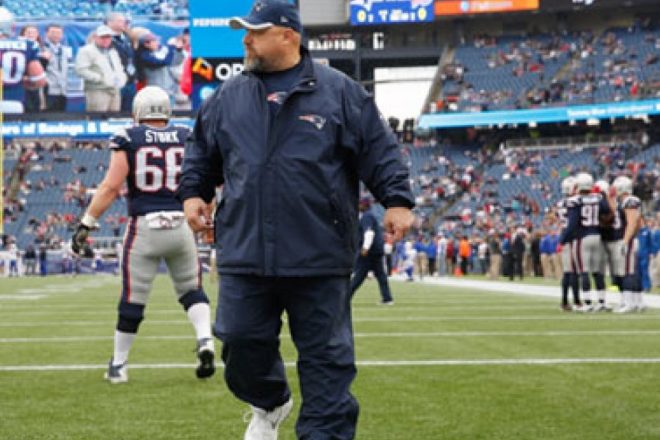 DeGuglielmo doing a masterful job: One of the questions that was asked when legendary and long-time assistant coach Dante Scarnecchia retired was how would the offensive line hold up without Coach Scar? The OL is where the Patriots always seem to find diamonds in the rough and mold them into productive players. And no one was better than Scar when finding linemen who weren’t high prospects and molding them into Patriots.

Well that box has been checked; DeGuglielmo is doing a masterful job. The Patriots offensive line has been a near hospital ward this season and the job they’re doing of protecting Tom Brady has been far beyond what was the consensus opinion was of them.  Starting the season with three rookies in the interior, and facing the daunting tasks of the Bills, Jets and Dolphins pass rushers, they’ve aced their test. In three games against those pass rushing teams, the Patriots have scored 106 points.

Coach Gugs has these players doing such a great job of moving from player to player and position to position, it is a testament to the hard work that he and the players have put in this spring, summer and almost at the halfway point of the season. Of course it helps that Scarnecchia is still involved with the draft process and has worked out quite a few of the players that are now are on the team. (See below Steal #2)

The Paranoia of Belichick Reaches Epidemic Proportions: Between filming opponent’s walk thru’s, deflating air in the footballs, arranging ninja warriors to break into hotel rooms and meeting rooms to steal game plans and notes it is a wonder that Bill Belichick has any time left to coach his football team.

The latest fiasco was that the Jets asked the league to sweep the visiting locker room at Gillette Stadium for listening devices prior to them occupying them on Sunday. Then during the game, Jets Security Director Robert Mastroddi, made an inquiry with NFL Security regarding the presence of two individuals wearing headsets and Patriots attire, who were positioned outside of the bench area on the Patriots sideline.

It turns out that neither of the questions raised by the Jets found any wrongdoing on the part of New England. The two individuals were in charge of keeping the referee’s headset batteries up to speed.

It shows just how much Bill Belichick is in the heads of these people. Instead of worrying about stopping Brady and the offense; they’re going all MacGuyver secret squirrels and worrying about non-existent listening devices. This is even carrying over to the Patriots who have now asked the NFL to sweep all visiting locker rooms prior to teams visiting to ensure that they’re bug free and to stop opponents from planting a bug and trying to frame New England….where does this foolishness stop?

Steal of the Year #1: Dion Lewis. It is amazing the stuff this guy is doing for the Pats this season. The move he put on Miami LB Koa Misi was a must-see video. Lewis has been a fantastic find for the Pats and he’s been one of the most difficult to bring down players on the offense. He’s thus far on the season outperformed well beyond expectations. While the third down back was thought to be a question mark entering the season, not only has he checked that box, he’s been far more.

It is a safe bet that when the team signed him to a future’s contract last winter that no one foresaw the success he’d be having this season.

Team Goals Key In this Week’s Wins: One of the things that is always preached around the Patriots and Bill Belichick is before any talk of a deep playoff run or Super Bowls is mentioned, it is taking care of the division first. That’s why the wins on Sunday against the Jets and Thursday against the Dolphins were so important.

By going thru the division 3-0 the first time, it leaves the Jets 2+ games and the Dolphins and Bills 4+ games behind the Patriots in the AFC East. Although there is still a very long way to go in the season, right now the division still goes thru New England. After hearing much about how each team narrowed the gap against the Patriots this off-season, the Patriots are still ahead of all three.

Steal of the Year #2: David Andrews. When the Patriots signed the UDFA center from Georgia, like Lewis, there wasn’t much hype around him and initially he wasn’t given much of a chance to stick on the roster. Andrews is the only player on the Patriots offense to play in every snap this season.

But taking a second look at Dane Brugler’s excellent Draft Guide from last year, his analysis on what we’ve seen thus far is spot on:

“A three-year mainstay at center for the Bulldogs, James “David” Andrews has the make-up of a prototypical center prospect – barrel-chested, smart as a whip and tougher than dirt. But he’s maxed out physically and lacks ideal base strength and overall size to match-up consistently with most of the brawling nose tackles in the NFL. Andrews is quick off the snap and uses his hands to meet rushers, gaining leverage, but his anchor will always been an issue due to his light lower body. He moves well for the position and understands blocking angles when pulling and at the second level, giving up his body to take away defenders. Andrews will be beloved by coaches at the next level once he gets into camp for his vocal leadership and gritty competitiveness – played through multiple injuries over his career, but is a tough son-of-a-gun who has to be forced off the field. While a notch deficient with his size and strength, Andrews will make it tough for a coach to cut him.

The team will have a choice once Bryan Stork returns from his injury on what they want to do at center, but it is a good problem to have. Andrews has been far from a liability this season and again it comes down to excellent scouting and coaching.

Jets Activate Ridley, Waive Owusu: The Jets enter their game against the Raiders with three healthy running backs as Steven Ridley was activated off of PUP and he’ll join Chris Ivory and Zac Stacy this week in Oakland. Bilal Powell has already been ruled out of this week’s game.

Ridley hasn’t played since Week 6 last year when, as a member of the Patriots, he tore his ACL against the Bills in Buffalo. To make room for Ridley, the team waived injured WR Chris Owusu. The WR/KR suffered his second concussion of the season against the Patriots last Sunday.

Bills Look to Turn it on in the Second Half: The Bills are on a bye week after playing (and losing to the Jags) in London last week. After much hype and fanfare, most of it generated by Rex Ryan, the Bills are 3-4 and if the season ended today, they’d be out of the playoff picture.

Much of what this season holds for the Bills will unfold in their next three game stretch where they’ll play all three AFC East teams in a 15 day stretch. On Sunday they’ll host the Miami Dolphins. Then they have to turn around just three days later to travel to the Meadowlands to take on the Jets on Thursday Night Football. Eleven days later on November 23, the Bills make a trip to Foxboro for their second matchup against the Patriots on Monday Night Football.

For a team that had playoff aspirations coming into the season, this is the beginning of the meat of their schedule. And already disappointing at 3-4, this isn’t where the team envisioned itself at the bye. Currently on the outside looking in, anything less than 2-1 on this upcoming slate of divisional games will be a disaster for Ryan and the team.

The pressure is on in Buffalo.