7 years ago at 5:17 pm ET
Follow @bob_george
Posted Under: Uncategorized

FOXBOROUGH – In a game filled with dropsies, fails on defending third down, missing key players and a blown onside kick coverage late in the game, the fact that the Patriots managed to prevail might portend greatness to follow this season, greatness that might supersede all the previous great seasons.

Tom Brady was pretty much left out there up the creek, without an oar, without a paddle, probably without a boat, and maybe without a creek. His receivers looked like they all had stonefingers out there. The rushing attack was five degrees below nil. The offensive line had more patches in it than a worn out spare tire off a 1949 Ford truck.

Meanwhile, his defense was being exposed. They could not stop the Jets on third down. Rob Ninkovich looked like a wide receiver, dropping three possible interceptions. The plan to stop the Jet running game and dare them to beat you through the air wasn’t working.

Yet in the end, it was the Patriots who managed to prevail thanks to some damaging Jet blunders. Bad clock management, a blown defensive play which led to the game-winning touchdown, and a false start which led to a ten second runoff to end the game allowed the Patriots to remain undefeated with a 30-23 victory over the Jets at Gillette Stadium on Sunday. The Patriots took firm command of the division lead, but should be thanking their stars that they did not suffer their first loss of the season.

The end of the game seemed to be veering towards overtime. An eight-yard touchdown pass from Brady to Danny Amendola midway through the fourth quarter gave the Patriots a 23-20 lead. The Jets finished with 8 of 14 conversions on third down, so you could figure that as long as the Patriots could defend the end zone, a tie would be okay and the Patriots could try and win it in overtime.

But the Jets gave the ball back on a four and out. Patrick Chung and rookie cornerback Justin Coleman made some key pass defenses to help give the ball back to the Patriots. The Patriots took over at their 32 with 5:32 left.

Curiously, the Jets didn’t spend any timeouts and let the Patriots march down the field towards field goal range. Amendola, Brady’s most trusted target of the day, caught a 13-yard pass in a terrific leaping grab with Buster Skrine all over him. Later, on third and ten at the Jet 33, Brady found Amendola on a slant route for eleven yards. It was now the two-minute warning and the Jets still had all three of their timeouts. 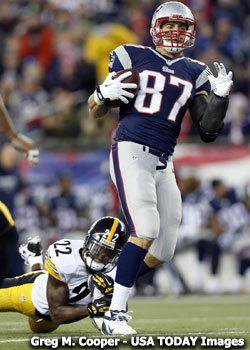 Rob Gronkowski caught the game-winning touchdown pass for the Patriots over the Jets on Sunday at Foxborough.
(USA TODAY Images)

Two plays later, the Patriots were at the Jet 15 and the Jets still had three timeouts left. With 1:18 left, the Jets blitzed Brady, leaving Rob Gronkowski wide open in the left flat. Brady dropped an easy screen toss to Gronk, and he literally walked in for the touchdown from 15 yards out. It was 30-20 and a lot of exhaling was going on around the stadium.

The Jets took over with 1:13 to go at their own 20. The Jets made it to the Patriot 37 with 18 seconds left and all their timeouts gone (one of which was burned due to an injury to center Nick Mangold). On first down, Todd Bowles sent in Nick Folk to try a 50-yard field goal. A false start on James Carpenter made it a 55-yard attempt. But Folk looked like Stephen Gostkowski and nailed the long field goal, and it was 30-23 with 15 seconds left.

Usually, the Patriots are among the best at defending the onside kick. But Folk dribbled one to the left side, Jamie Collins deflected the ball before it rolled ten yards, and the ball squirted past Amendola. Brandon Marshall recovered the onside kick, and the stadium began to inhale again. The Jets had 15 seconds, no timeouts and 48 yards to tie the game.

On the first play, Ryan Fitzpatrick hit Eric Decker over the middle for 12 yards. As the clock wound down, Fitzpatrick hurriedly ran a spike play. But Marshall had not come to a set position, and the Jets were called for a false start. Inside of two minutes in the second half and out of timeouts, there was a ten second runoff, ending the game.

And those drops. Nine total for the game for the Patriots. Brandon LaFell, playing in his first game of the season, looked rusty with an appalling five drops. Julian Edelman, who hurt his pinky finger last week against Indianapolis, dropped a sure touchdown on the first offensive drive of the third quarter.

Brady was further bedeviled with missing key starters. The offensive line was further damaged by the loss of rookie left guard Shaq Mason. Josh Kline drew the start at left guard. Dion Lewis, the new running back sensation, did not play. The Jets blitzed quite often, sacking Brady three times.

Fitzpatrick, who went to Harvard and is familiar with the Patriots from his days in Buffalo, played well despite still never having beaten the Patriots. He finished 22 of 39 passing for 295 yards and two touchdowns, and amazingly a rating higher than Brady at 97.7. Decker had six catches for 94 yards as the former Bronco was especially clutch on third down.

This game once again came down to the winning team making more plays than the losing team. But the Jets look more fearsome under Bowles than they did under Rex Ryan. The end of the game did not go well for Bowles thanks to the clock management, but the Patriots will have plenty to think about when these teams meet again in December.

The Patriots have a short week, then come right back with a home game Thursday night against Miami. Joe Philbin is gone, and new head coach Dan Campbell has the Fish fired up as they routed Houston on Sunday at home, 44-26.

Another home date with a division rival, with only three days to prepare. The Patriots are the best prepared team in the NFL, and Thursday night will show once again how thankful Patriot Nation is to have the coaching staff they have.

By: Mark Morse
Both games are in the books and we have learned about several players we have not seen play.  The practices leading up to the games…
40 mins ago